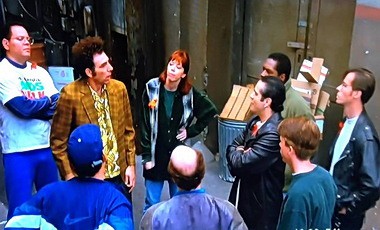 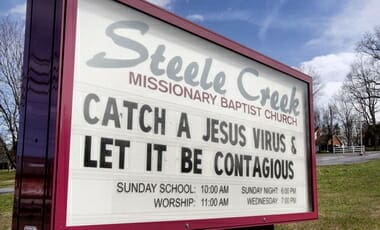 Good example of most Christians these days.

I am updating this post with recent events — the above is “orthodox humor,” the below is of a more serious [secular] matter. (The above is technically MORE serious, as the watering down of the Gospel Message would be more “life-threatening through all eternity.”)

Many churches are offering drive-thru prayer — and one church is even planning a drive-in service with a jumbotron — as congregations are no longer able to meet in person for large gatherings to limit the spread of the coronavirus outbreak.

Troy Brewer, senior pastor of 5,000-member OpenDoor Church in Burleson, Texas, in Fort Worth area, told Fox News the circumstances may hinder their outreach globally but now is the time to focus on the local community.

“We want to love people, bless people, and we want to pray,” Brewer said. “We want to be available to people and serve them.”…

I think a wonderful — related — article to read is THE FEDERALISTS’S article titled: Why It’s Unconstitutional To Keep Grocery Stores Open While Closing Churches.

RIGHT SCOOP has an article detailing how a county in Los Angeles is stopping drive through churches:

I’m all about trying to get people to stay at home to halt the spread of the coronavirus. But threatening people with jail time or a huge fine when they are protected in their vehicles or for not wearing a mask is just ridiculous and fascistic. Welcome to the People’s Republic of San Bernardino.

One commentator on my LiveLeak said:

The Hollywood actor, Daniel von Burgen, who played Mr. Kruger in Seinfeld, shot himself in the head Monday morning in a failed suicide attempt. He is currently in an Ohio hospital, clinging to life in critical condition. But, not only was von Burgen able to survive, he was able to nonchalantly call 911 for help.

“I’ve shot myself in the head … and I need help,” Daniel told the 911 operator, just as calm as he could be. The calmness of both von Burgen and the operator make the call even more eerily creepy.

When the blase operator asked if the shooting was an accident, von Burgen replied, “I was supposed to go to the hospital and I didn’t want to… They were supposed to amputate at least a few toes.”

So, unwilling to lose a few toes, Daniel decided taking his life with a .38 was a better option. When asked where exactly he shot himself, Daniel answered, ” I shot in my temple.”

Daniel von Burgen even sounds annoyed with the police department when they tell him to stay where he is and to show his hands. The bizarre 911 call was obtained by TMZ, but be warned — it is highly disturbing…

Just a humorously morbid  aside. At one point the 911 operator was asking for a phone number of kin… he then asked Daniel von Bargen if he remembered it “off the top of his head.” Bad choice of words.