The Reason For This Page: this page are links to articles (many by people of color) dealing with the many myths either assumed by persons not familiar with history, or purported as history by people who are trying to warp minds into a way to think against a whole group of people holding a certain view of politics. Herein you will find responses to some of the real history of slavery, the founding and aim of the KKK, myths like a “party change” by Dixiecrats, and the like. Enjoy what is below, and feel free to let me know of any dead links at rpt@r-pt.net.

.
To download an audio file of the above (96kbps), GO HERE
For the entire book (PDF), GO HERE.

Terrorist Arm of the Democrats

This is the “Southern Strategy” explained by it’s author at the time he fashioned it. Below that is an adaptation by Larry Elder of what Pat Buchanan was saying at the time.

1) The Southern Strategy Revisited: Republican Top-Down Advancement in the South, by Joseph A. Aistrup.
2) The Rise of Southern Republicans, by Earl Black and Merle Black.
3) From George Wallace to Newt Gingrich: Race in the Conservative Counterrevolution, 1963-1994, by Dan T. Carter.
4) A Stone of Hope: Prophetic Religion and the Death of Jim Crow, by David L. Chappell.
5) The Emerging Republican Majority, by Kevin Phillips.

This graphic is a picture of a card, they were like playing cards that the KKK would carry in order to identify those members of that they would terrorize — and if that didn’t work, lynch. They were ALL Republicans:

(Editor’s note: A recent federal bill memorializing as a National Historic Trail what has come to be known as the Cherokee Indian Trail of Tears is based on false history, argues William R. Higginbotham. In this article, the Texas-based writer delves into the historic record and concludes that about 840 Indians not the 4,000 figure commonly accepted died in the 1837-38 trek west; that the government-financed march was conducted by the Indians themselves; and that the phrase “Trail of Tears” was a label that was added 70 years later under questionable circumstances.) The problem with some of our accounts of history is that they have been manipulated to fit conclusions not borne out by facts. Nothing could be more intellectually dishonest. This is about a vivid case in point.

Lyndon B. Johnson to two governors on Air Force One according Ronald Kessler’s Book, “Inside The White House“ 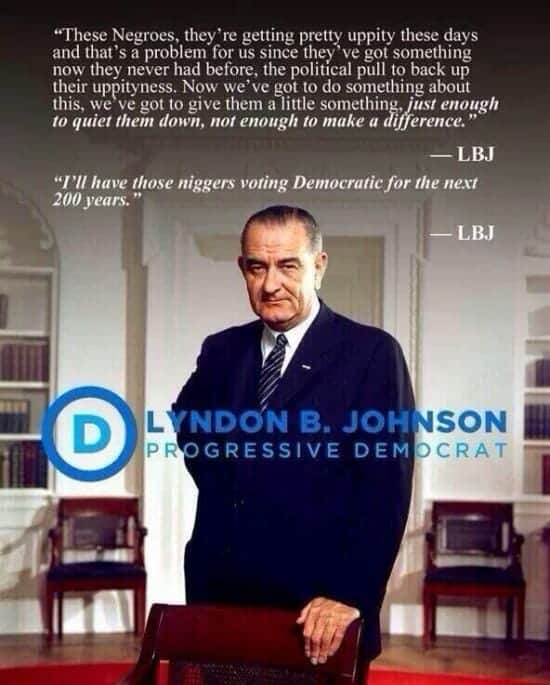 When I first heard Cliven Bundy’s remarks about the “ghetto” and how he thought “Negroes” picken’ cotton was better than what they have… I was saddened. I had already come to the conclusion that Cliven was not entirely correct with his view of Federalism, but that the Federal government was wrongly pressing an issue of importance for those who wish to shrink government. And remember, Bundy is the last of over 50 ranchers/farmers in his area whom were effectively chased out of business by Federal regulations.

I still think a vested interest in what went on (and is going on in a state where the Federal government is in control of 81% of the land in that state) in the larger sense on the Bundy Ranch deserves our attention. An earlier post explains why we should care: Confused About the Ongoing Bundy Ranch Debacle? Read On…

There are some good (macro) signs coming from this, and that is that the states are eyeballing Federalism in the classical sense. And directly related to the “Bundy Standoff” our side of the country is looking at curtailing Federal control of soooo much property:

Lawmakers from Western states said Friday that the time has come for them to take control of federal lands within their borders and suggested the standoff this month between a Nevada rancher and the federal government was a problem waiting to happen.

“What’s happened in Nevada is really just a symptom of a much larger problem,” Utah House Speaker Becky Lockhart, a Republican, told The Salt Lake Tribune.

The lawmakers — more than 50 of them from nine Western states — made their proclamations at the Legislative Summit on the Transfer for Public Lands, in Utah, which was scheduled before this month’s standoff between Nevada rancher Cliven Bundy and the Bureau of Land Management….

ALL THAT ASIDE, the statements I heard from Bundy were hard to hear. BUT, I remembered an older article (2009) by Walter Williams called “Race Talk” in which he explains that over the years what “African-Americans” have been politely called has changed:

So even though Cliven Bundy was calling a segment of our body-politic, “Negro,” that wasn’t the issue that worried me. But before drawing a final conclusion on the matter I chose to wait a few days to see what would flesh out.

I am glad I did, because the legacy media pushed a narrative (see three good critiques of this narrative: here, here, and here) different from the larger body of evidence. Gateway Pundit, Alfonzo Rachel, Kira Davis, and Larry Elder helped trigger in my mind what Paul Harvey said was “the rest of the story.” So lets start the journey of what Cliven was saying that is no different in its substance (just not delivery) from what Thomas Sowell, Walter Williams, Larry Elder, C. Mason Weaver, Jesse Lee Peterson, Star Parker, Carol Swain, Allen West, Deneen Borelli, and others have been saying for a long time. In fact, here are some of the covers I wish to show:

All of the above books and names are people of color saying in a more erudite manner what this po-dunk farmer said. However, many of the above authors call Big-Government what it is to the black community: plantation.

Dr. Sowell made this thinking clear with his debate about the dynamics of welfare with then Pennsylvania Secretary of Welfare, Helen O’Banion (1980). The black family was more intact during the hardest times of our nations history for them, but now 70% of black kids are born to single mothers because the father abandons them because the state will cover his ass. Sowell makes the point that the black family was better during even slavery.

How One Views Events

How is this a “vote pump”? ~ paying for those to stay unemployed or not worry about their family and continue to vote for the party that pays them:

(CNS News) The top 40 percent of households by before-tax income actually paid 106.2 percent of the nation’s net income taxes in 2010, according to a new study by the Congressional Budget Office.

At the same time, households in the bottom 40 percent took in an average of $18,950 in what the CBO called “government transfers” in 2010.

Taxpayers in the top 40 percent of households were able to pay more than 100 percent of net federal income taxes in 2010 because Americans in the bottom 40 percent actually paid negative income taxes, according to the CBO study entitled, “The Distribution of Household Income and Federal Taxes, 2010.”

(CNS News) Buried deep on the website of the U.S. Census Bureau is a number every American citizen, and especially those entrusted with public office, should know. It is 86,429,000.

All told, including both the welfare recipients and the non-welfare beneficiaries, there were 151,014,000 who “received benefits from one or more programs” in the fourth quarter of 2011. Subtract the 3,212,000 veterans, who served their country in the most profound way possible, and that leaves 147,802,000 non-veteran benefit takers.

Paying for failure, and a new type of slavery… Western style.