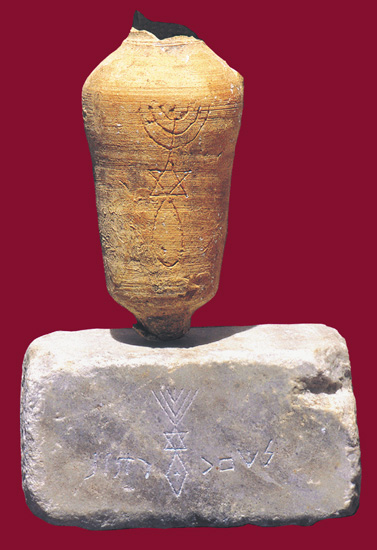 This artifact (and others) were found in the ancient grotto near the the Tomb of David on Mount Zion. On each side of the symbol, a trinity of sorts, is Aramaic writing. (The translation is below to the right.) Exodus Oil has some insights on this artifact:

These artifacts are believed to be from the 1st Century baptismal of James the Just and the Apostles. They were found on Mount Zion, Jerusalem.

James was the brother of Jesus, and is described as the leader of the first Nazarene Messianic church.

“In 1963, a small ceremonial silver thin plate was found in the Judean Desert near Jerusalem that dated back to the first Century. A Catholic priest and archaeologist named Emanuel Testa deciphered the Aramaic text of this artifact, the first line of which reads: “For the Oil of the Spirit.”

Testa was amazed to find that the text was nearly identical to James 5:14-16.

This tiny lamina (3″x1″) is a sort of pass card or certificate of belief in Jesus, used in early Jewish-Christian baptism to confirm the forgiveness of sins and “right of passage” into the Kingdom of Heaven.

This text from the Book of James clearly indicates that the earliest Jewish Christians anointed believers with oil. What has not been clearly understood until now is how this anointing was connected with baptism and the entry into the faith. This is no longer a mystery.

In 1990, Ludwig Schneider, editor in chief of the magazine Israel Update, struck up a friendship with an old Greek Orthodox monk who lived as a hermit in the Old City of Jerusalem. On one occasion, the monk showed Schneider a cache of artifacts that he had secretly excavated on Mount Zion before the Six Day War in 1967. Scheneider was taken aback. Many of these pottery shards, oil lamps and stone pieces were engraved with an unknown symbol. The symbol consisted of a menorah on top, a Star of David in the centre and a fish at the bottom. Schneider was immediately convinced that this must have been a symbol of the first Jewish-Christian church (assembly).

The monk then led Schneider to a cavity in the rock adjacent to the Tomb of David and the Upper Room on Mount Zion, and told him that this is where he found the artifacts. Today, the cave is dark and musty and sealed off with iron bars. As legend has it, some great secrets are hidden there. Some say that according to the Dead Sea Scrolls, it is a cache of Second Temple treasures. The most popular legend is that deep within this cave lies the long lost Ark of the Covenant.

As it turns out, this is the sacred baptismal grotto of the first Nazarene (Messianic) church, and the treasure hidden there was the First and Second Century artifacts (about 60 in all) found by the monk. Among these artifacts is a brick-shaped piece of local marble inscribed with the Messianic Seal and the words in ancient Aramaic: “For the Oil of the Spirit.” This seems to have been the base for a vial of anointing oil. A small pottery flask with a Messianic Seal found nearby supports this theory.

In my opinion, this piece of marble came into use in the earliest Nazarene times at this baptismal site, below the church in the Upper Room established by James the Just and the Apostles.

This was, of course, a perfect place for the first church, because the Upper Room is where the Holy Spirit fell upon the disciples at Pentecost. The church was located in the heart of the Essene (a strict, contemplative Jewish sect) Quarter, and was probably a Qumran-like Essene community. According to the Book of Acts, there was strict discipline and a hierarchy. It stands to reason that this group would have immediately established Nazarene ritual, including a ceremonial healing and baptismal centre where conversions were sealed by immersion in water and anointing with oil. Judging from the inscription “For the Oil of the Spirit,” the anointing was symbolic of baptism in the Holy Spirit. The Book of Acts records 3,000 conversions here on the day of Pentecost alone.

I believe that James and the Apostles administered the “Oil of the Spirit” from this very stone base. That would make this piece, if my suspicions are correct, the earliest known Christian artifact. I believe that the previously discovered lamina with the same inscription was also used in this congregation.

But ten years after its discovery, this historic, amazing find remains a well-kept secret. Ludwig Schneider approached the Israel Museum with the artifacts, and was promised that they would be put on display. But it never happened. It seems that the Israeli authorities do not want the mystery of the Messianic Seal to come to light.”

“Is anyone among you sick? Let him call for the elders of the church, and let them pray over him, anointing him with oil in the name of the Lord.” 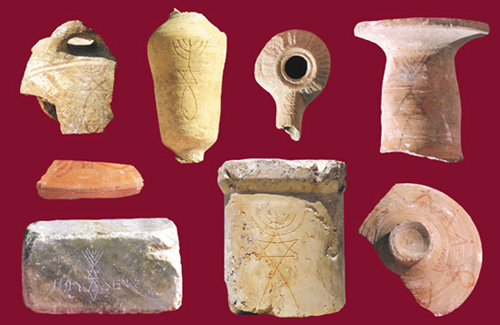 Do not let this verse pass you by so easily. We know where the church in Jerusalem was, we have found an anointing jar from that first church, so rest assured that most likely this small vase pictured above was actually handled by the Apostles as well as Jesus’ half-brother. Peter mentions David in Acts 1, quoting David in the Psalms, and then Peter mentions David again and quoting him again in chapter 2.

“Men and brethren, this Scripture had to be fulfilled, which the Holy Spirit spoke before by the mouth of David concerning Judas…. For David says concerning Him:

‘I foresaw the Lord always before my face,

For He is at my right hand, that I may not be shaken.

Therefore my heart rejoiced, and my tongue was glad;

Moreover my flesh also will rest in hope.

For You will not leave my soul in Hades,

Nor will You allow Your Holy One to see corruption.

You have made known to me the ways of life;

You will make me full of joy in Your presence.’

“Men and brethren, let me speak freely to you of the patriarch David, that he is both dead and buried, and his tomb is with us to this day.”

The word translated “with us” can be translated before us. It is interesting that the Essenes (Jews) were in control in that day of the Tomb of David and the upper room was above that, the pieces of the Messianic puzzle start to fit together, and the symbol displayed here starts to make more and more sense as one realizes that for the first few decades the only coverts to “Christianity” were ethnic Jews as well as Hellenized Jews, thus, Messianic Judaism was the name of the game then. Only until there was a split between the still orthodox Jews (Pharisees/Sadducees) and the newly formed and still tolerated Messianic Jews (mainly Essenes and some from the other sects) about allowing uncircumcised persons into the Jewish custom is when the true cover-up and intolerance began.

Later the mutual wanting to cover up the fact that Christianity was really based in deep Jewish history and ritual was implemented by both the Jews whom survived the Temple destruction and the later cover up by the gentile church for political reasons (the Rome being the “N Jerusalem” for instance). Power and control was then the name of the game.

This symbol is the key (of sorts) to healing the long rift between brothers and should invigorate those who want to know and enjoy the true history of our faith and look forward to our Jewish Savior (Yahshua HaMashiach) being reunited not only with what we assume to be his body, but with His chosen people/nation again. I long for that day when the Jewish land will be truly inhabited again by all the Messianic Jews of old to this day.

One of my favorite Bible Translations uses the symbol, and comments:

The ISV logo is a triglyph of three historic symbols. The upper symbol is the Menorah. The center symbol is the Magen David (“Star of David”). The lower symbol, the Ichthus, is that of a fish. The Menorah is the traditional symbol of Judaism. The Magen David also became identified with Judaism. Today, it is the official symbol of the State of Israel and appears on its national flag. Early Christians used the Ichthus as an identifying mark between believers. In the Greek language, the word “fish” (ΙΧΘΥΣ) is an acrostic that spells out the words “Jesus Christ Son of God Savior.” The ISV triglyph is a combination of all three historic images, thus symbolizing the historic roots from which the Church developed. In an informal archaeological dig, a Greek Orthodox monk on Mount Zion, Jerusalem discovered the original triglyph from which the ISV logo is derived. The original triglyph was inscribed on a number of different stones that may have their origin in the Byzantine period, fourth to seventh centuries, A.D. If this claim is accurate, the existence of this triglyph means that the Magen David has existed as a symbol of dispersed Israel from the early Christian centuries. The ISV Foundation claims the image of the triglyph as it appears on the cover of this volume as a trademark to indicate the foundation’s exclusive rights to utilize it for use in Bible translations and Bible study tools. These tools include volumes produced by various ministry subsidiaries of The ISV Foundation. 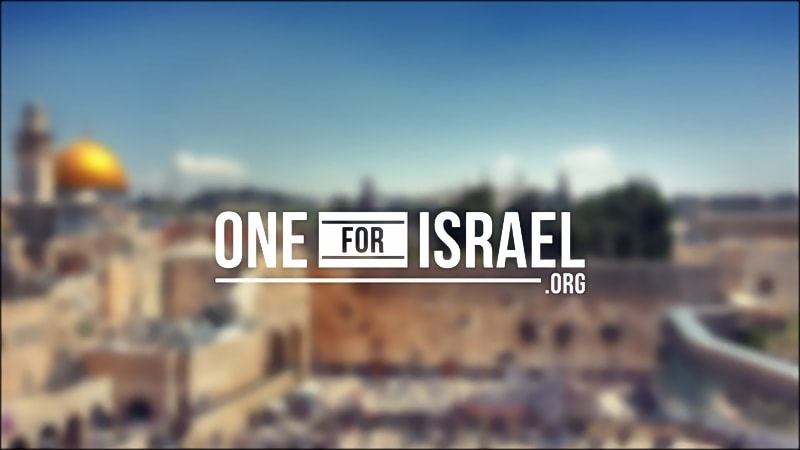