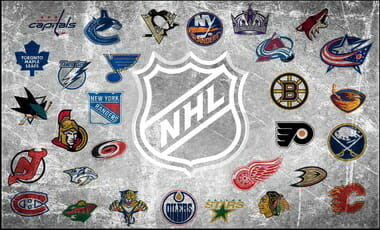 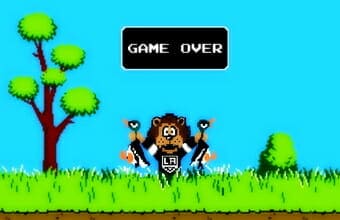 Players from the Los Angeles Kings and Anaheim Ducks, as well as the Honda Center crowd, salute Teemu Selanne in the last game of his memorable NHL career.

(The 2013 story is linked in photog) One happy byproduct of Teemu Selanne’s excellent hockey adventure is that his three sons, Eemil, Eetu and Leevi, and daughter, Veera, are around for first-hand viewing of their father.

But the teenage boys, or at least one of them, can be a little tough cracking on dear old dad. The 42-year-old Selanne, who had the game-winner for the Ducks in the playoff opener against Detroit, was laughing about the ribbing on Thursday after the morning skate.

“Every time I come home they are talking about the game,” he said. “And my youngest one, he doesn’t  believe I have scored so many goals without … pretty much, no moves in hockey, he thinks.

“He [Leevi] is 13 and he thinks I have only three moves and the goalie still don’t know those.”

His goal in Game 1 was his 42nd in the playoffs. Selanne, for the record, has 663 regular-season goals.

The boys remember the Ducks’ Stanley Cup victory in 2007. Selanne’s daughter (he said emphatically that  she won’t be playing hockey) was born later that year.

“Even the year we won they still … they remember everything,” Selanne said. “But even so somebody would ask them in school, ‘What does your dad do for a living?’

“They would probably not know: ‘I don’t know, sometimes he goes to play hockey and sometimes golf. To be honest, I don’t really know. But he can’t help with schoolwork or homework. So I don’t know what he’s doing.’….

…”I’m going to miss watching you play,” said Drew Doughty. “I really am. Thank you.”

Selanne’s quip to Justin Williams was bleeped out a bit, but it sounded like something about Game 7 heroics.

“It’s been an honor, man,” said a sincere Jonathan Quick, who then received great praise from Selanne who called him “unbelievable.”

Selanne also shared a bit of a longer embrace with Anze Kopitar, saying “You’re a hell of a player. Don’t give up.”

As he reached the end of the line, Selanne was greeted by thunderous applause from the Honda Center crowd. His teammates stayed on the ice with him, as did the Kings, who looked on and tapped their sticks as the cheering swelled around the ice.

Selanne appeared to be holding back tears as the affection rained down from the rafters….

The Flash started his career with the Winnipeg Jets where he set the rookie scoring record with 76 goals and 132 points in 1992-93, a record that will probably never be broken.

He spent parts of four seasons with the Jets before being traded to the Mighty Ducks in 1995-96. His first stint in Anaheim lasted six years before he moved on to the San Jose Sharks for three seasons. He spent one season with the Colorado Avalanche before heading back to the Ducks for the last nine seasons of his career. He won his first and only Stanley Cup with the team in 2007.

To go out in such a disastrous Game 7 is unfortunate, but it does nothing to tarnish the remarkable legacy left by Selanne, who was one of the last remaining links to the run-and-gun days of the early 1990s in the NHL.

Attention will turn to Jaromir Jagr and Martin Brodeur as part of the old guard in the NHL, but Selanne was one of those players that was universally loved by hockey fans all over the world. The void he will leave in the NHL is a big one, but what incredible memories he left us all with.

With Boston Bruins goalie Tim Thomas back in the nation’s capital, Washington Capitals fans weren’t going to let him forget his skipped trip to the White House.

At Game 3 of the Bruins-Capitals playoff series Monday night, several spectators showed up with pictures of President Barack Obama and signs taunting Thomas. In January, he didn’t show up when the rest of the Bruins were invited to the Stanley Cup champions’ traditional visit to the president’s office.

Thomas, born in Michigan, said at the time he believes the federal government “has grown out of control.”

Most of the Obama signs were displayed by fans sitting near the glass behind the net Thomas defended in the first and third periods of Monday’s game.