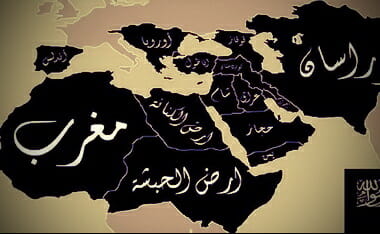 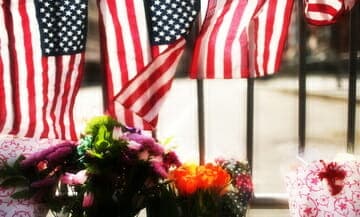 On June 26, Governor Deval Patrick and Boston Mayor Thomas Menino will be honored guests at the grand opening of the Islamic Society of Boston’s Cultural Center in Roxbury, Massachusetts. Americans for Peace and Tolerance wish the Boston Muslim community well in their new cultural and religious center, and we celebrate the growing religious diversity it represents. We are deeply concerned, however, about the extremist leadership of this new institution. This video is from a press conference held to discuss our concerns.

Click to enlarge… suspect (left, white cap) is running away from explosion without back-pack (via HotAir): FBI NOT looking at the two men pictured below

The Smoking Gun has an update, teens deny involvement:

These are great examples of how progressive thinking affects reasonable conclusions. Most killers and violent attacks come from the left… sorry Chris Matthews!

CAUTION, this is a link to a couple graphic photos of the damage done to spectators after the bomb blast (proceed with caution: HERE). The video above is a view of a runner when the first bomb blast happened. The following video is during a Fox News live broadcast. The gentleman in the *graphic* photo (linked) is seen here, quickly… because once Fox realized what they showed, they switched feed. I hope he lived… he looked conscious and aware.

(CNN) — It didn’t take long Monday for speculation to ramp up online over the timing of the Boston Marathon bombings, which came on Patriots Day, a state holiday in Massachusetts and Maine marking the anniversary of the opening battles of the American Revolutionary War.

The American uprising against British authority in Lexington, Massachusetts, was on April 19, 1775, but Patriots Day is celebrated on the third Monday in April, falling this year on April 15.

“It’s a day that celebrates the free and fiercely independent spirit that this great American city of Boston has reflected from the earliest days of our nation,” President Obama said Monday, a few hours after a pair of bombs rocked the finish line of the Boston Marathon, killing at least three and injuring dozens more.

For many New Englanders, it is a day of pride that comes with historical re-enactments, the Boston Marathon, baseball and a day off for schools and government employees.

It’s now a day that will go down in history along with other violent U.S. incidents in April, including the 1993 FBI siege of David Koresh’s compound in Waco, Texas, the 1995 Oklahoma City bombing, a mass shooting at Columbine High School in 1999 and the Virginia Tech massacre in 2007.

The Waco siege and the Oklahoma City bombing fell on April 19, the actual anniversary of the Battles of Lexington and Concord. To some people following Monday’s bombing online and through social media, the proximity of Monday’s incident to those anniversaries was enough to suggest an act of domestic terrorism…. (read more)

Also be aware we, as a country, have been here before. I speak of the Haymarket Massacre (seven police officers killed and at least four civilians); the Bath School Massacre (36 school children and 2 teachers were killed; During rescue efforts at the school, searchers discovered an additional 500 pounds of unexploded dynamite and pyrotol connected to a timing device set to detonate at the same time as the first explosions); the Opelousas Massacre (Democrats massacred nearly 300 African-American Republicans in Opelousas, Louisiana), etc. We got through those as a country, we will get through this.