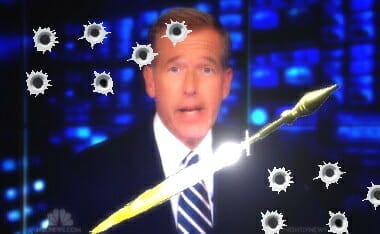 Politico notes that William’s has told the story multiple times, as the above video shows:

Williams has told the story several times, including during a 2013 appearance on “The Late Show” with David Letterman.

“Two of our four helicopters were hit by ground fire including the one I was in, RPG and AK-47… we were only at 100 feet doing 100 forward knots,” he told Letterman. “We landed very quickly and hard, and we were stuck, four birds in the middle of the desert. And we were north out ahead of the other Americans.”

This video comes from NewsBusters:

Here is more via the Weekly Standard, Stars and Stripes first uncovered the fake story:

NBC Nightly News anchor Brian Williams admitted Wednesday he was not aboard a helicopter hit and forced down by RPG fire during the invasion of Iraq in 2003, a false claim that has been repeated by the network for years.

Williams himself repeated the claim Friday during NBC’s coverage of a public tribute at a New York Rangers hockey game for a retired soldier that had provided ground security for the grounded helicopters. In an interview with Stars and Stripes, he said he had misremembered the events and was sorry.

The admission came after crew members on the 159th Aviation Regiment’s Chinook that was hit by two rockets and small arms fire told Stars and Stripes that the NBC anchor was nowhere near that aircraft or two other Chinooks flying in the formation that took fire. Williams arrived in the area about an hour later on another helicopter after the other three had made an emergency landing, the crew members said.

…The mind boggles. That a man who has risen to the top of his profession would need to imitate Baron von Munchausen and claim experiences that were so blatantly false defies explanation… or rather any explanation that doesn’t include the word “sociopath.” That he would use the occasion of a senior non-commissioned officer’s retirement to spin the web of deceit once again is tawdry beyond words.

His excuse is priceless:

“I would not have chosen to make this mistake,” Williams said. “I don’t know what screwed up in my mind that caused me to conflate one aircraft with another.”

More non-sequiturs from the Left, in this case, David Letterman. He tries to make a connection between the Pilgrims and this mosque by saying that what the Pilgrims were after we should allow these particular backers of the mosque to get. He is implying that they are not being allowed to worship freely and are being persecuted. Both of which are not true. Not to mention Pilgrims were not blowing up buildings or leveling towns, or financially supporting terrorists: