More non-sequiturs from the Left, in this case, David Letterman. He tries to make a connection between the Pilgrims and this mosque by saying that what the Pilgrims were after we should allow these particular backers of the mosque to get. He is implying that they are not being allowed to worship freely and are being persecuted. Both of which are not true. Not to mention Pilgrims were not blowing up buildings or leveling towns, or financially supporting terrorists: 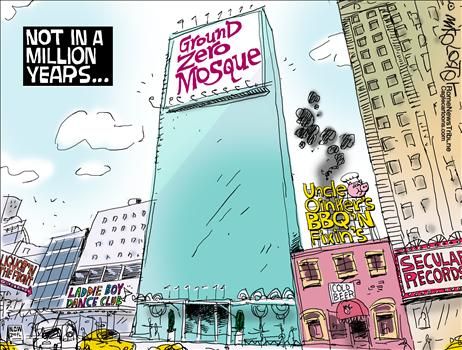 Like I said, many Dems (not progressive liberals), will be sorry for supporting this mosque. The bricks in the wall begin to fail. Here is one of the first big investors shown to have terror ties. This comes with a FreeRepublic h/t:

MYFOXNY.COM – Fox 5 News reported Thursday that one of the financial backers of the Islamic mosque and cultural center project in Lower Manhattan once contributed to a terror group, although the investor says the contribution was made because he thought he was giving money to a harmless charity.

One of the key players in Sharif El-Gamal’s Mosque near Ground Zero is Egyptian born businessman, Hisham Elzanaty. Fox 5 News has learned exclusively and confirmed with Mr. Elzanaty’s attorney that Elzanaty made a “significant investment” in the development of the mosque near Ground Zero.

Fox 5 News has also independently confirmed information obtained by the New York Post, that in 1999 Hisham Elzanaty sent money to an organization that would later be deemed by the US government to be a terrorist group.

The organization was the Holy Land Foundation for Relief and Development, also known as HLF. The now defunct group’s 1999 tax records show Elzanaty contributed more than $6,000 to HLF.

Two years later, in 2001, HLF was shut down by the federal government and designated as a global terrorist. After a mistrial in 2007, in 2008 five HLF leaders were convicted of providing material support to Hamas.

Video with a Big Peace h/t: