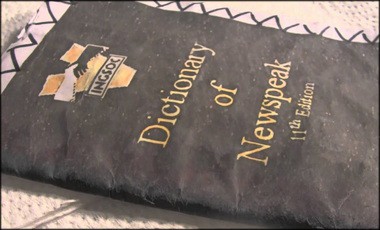 “Definitions now are being rewritten and changed in real-time to fit…whatever the establishment wants people to think,” says five-time Emmy Award-winning investigative journalist Sharyl Attkisson. The term “anti-vaxxine” is now used to describe anybody who is opposed to vaccine mandates. In this episode, we discuss how propagandists have taken control of the information landscape.

The CDC caused an uproar in early September 2021, after it changed its definitions of “vaccination” and “vaccine.” For years, the CDC had set definitions for vaccination/vaccine that discussed immunity. This all changed on September 1, 2021.

The prior CDC Definitions of Vaccine and Vaccination (August 26, 2021):

Vaccine: A product that stimulates a person’s immune system to produce immunity to a specific disease, protecting the person from that disease. Vaccines are usually administered through needle injections, but can also be administered by mouth or sprayed into the nose.

Vaccination: The act of introducing a vaccine into the body to produce immunity to a specific disease.

The CDC Definitions of Vaccine and Vaccination since September 1, 2021:

Vaccine: A preparation that is used to stimulate the body’s immune response against diseases. Vaccines are usually administered through needle injections, but some can be administered by mouth or sprayed into the nose.

Vaccination: The act of introducing a vaccine into the body to produce protection from a specific disease.

People noticed. Representative Thomas Massie was among the first to discuss the change, noting the definition went from “immunity” to “protection”.

CDC emails we obtained via the Freedom of Information Act reveal CDC worries with how the performance of the COVID-19 vaccines didn’t match the CDC’s own definition of “vaccine”/“vaccination”. The CDC’s Ministry of Truth went hard at work in the face of legitimate public questions on this issue…..

Another note on the Merriam Webster (Ditionary) change to “Vaccine” is elucidated by DECEPTION, SELF-DECEPTION, & DEFACTUALIZATION — who has an excellent subtitle to the site: “Wherever money is insufficient to bury the truth, ignorance, propaganda, and short memories finish the job.” Funny and sad at the same time.

Paraphrasing George Orwell’s ‘Animal Farm’ to illustrate a simple concept my mother drummed into my head from as far back as I can remember, ‘Words mean things.’

In his other memorable offering, ‘1984,’ Orwell used a construct called “Newspeak” as a means for his dystopian government to control thought. It did so by limiting the number of words available with which to articulate thought. I suppose elimination of words was to the author a simpler method to use in fiction when compared to that which has been employed in fact by those who seek to control our thoughts and our acceptance of their agendas.

The current pathway to achieving Orwell’s objective in what we like to think of as ‘the real world’ is to keep the words but change their meaning. There can be no more glaring example than Merriam Webster’s treatment of the word ‘vaccine.’ One day the word referred to a substance administered to an individual in order to convey immunity and to stop the spread of a disease. Overnight it was expanded to include Gene Therapy.

Consider the difference this small addition makes. The pushback against ‘vaccine’ is growing in scope and strength, fueled primarily by the revelation that it is not a vaccine but in fact is gene therapy. Now, with the stroke of a pen, it is also a vaccine. For the propagandists this neutralizes all argument based on whether or not the government is being truthful in its vaccine regulations, mandates and other pronouncements. Now that gene therapy is a vaccine it is no longer a lie. Advantage Orwell.

Consider VAERS, that trove of information on the negative aspects of vaccines. This is a useful compilation of information but also illustrates our government’s approach to the entire subject. When reports are helpful to the official narrative they are akin to gospel but when they provide data that runs counter to the narrative they are false information. My reaction to the government’s self-serving position on VAERS is like that of Enid Strict, SNL’s Church lady, “Well, isn’t that special?”….

FOX NEWS covers the change in “Anti-Vaxxer” in the Merriam Webster dictionary as well, saying,

Merriam-Webster’s online definition of “anti-vaxxer” is spreading on social media this month amid outrage over vaccine mandates. The definition of the term was first added to the online dictionary in 2018 and was updated in late September.

“Redefine words all you want Merriam Webster, but WORDS STILL HAVE MEANING. By this definition, you aren’t pro-vaccine unless you believe the government should force everyone to get a medical procedure?” Florida Republican Gov. Ron DeSantis’s press secretary, Christina Pushaw, tweeted Wednesday morning.

Fox News examined Merriam-Webster’s current definition of “anti-vaxxer” compared to its definition from 2018, and found it omitted the word “laws” in favor of “regulations.” The definition still states, however, that an “anti-vaxxer” includes people who oppose such rules on vaccinations or the vaccines, themselves.

“Definition of anti-vaxxer: a person who opposes the use of vaccines or regulations mandating vaccination,” Merriam-Webster’s website currently states, noting that it was updated on Sept. 29, 2021.

The definition of “anti-vaxxer” was previously defined, according to an archived definition from 2018 examined by Fox News, as: “A person who opposes vaccination or laws that mandate vaccination.”

Editor at large of Merriam-Webster.com, Peter Sokolowski, told PoltiFact in May – after outrage first cropped up over the definition – that the word was first added in 2018.

At the time, Sokolowski said the definition remained unchanged from 2018.

Merriam-Webster did not immediately respond to Fox News’s request for comment on why the definition was updated on Sept. 29.

Fox News also examined the definition of “anti-vaxxer” in the New Oxford American dictionary and found it does not include language on mandates, laws or regulations.

“A person who is opposed to vaccination, typically a parent who does not wish to vaccinate their child,” the New Oxford American dictionary states. 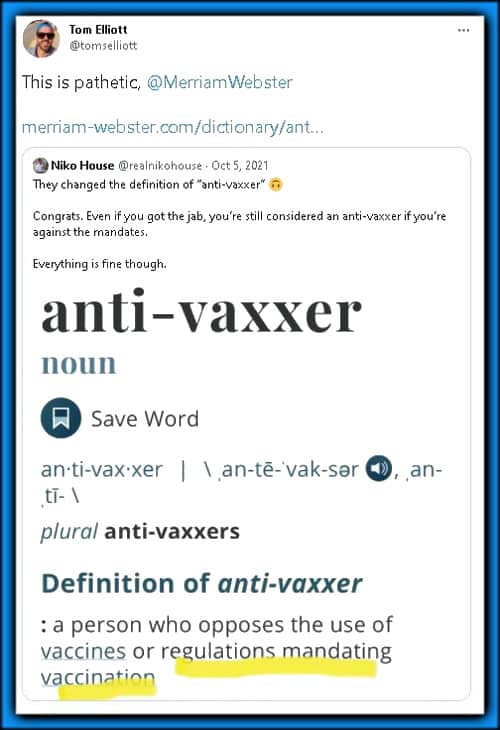 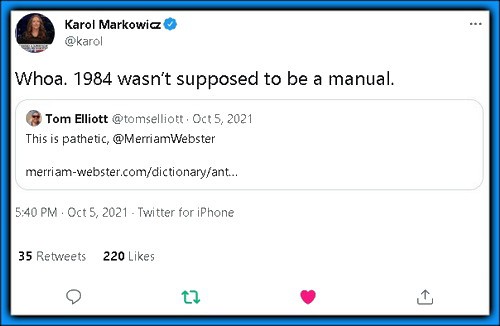 And of course the CDC changes what is required to be considered “vaccinated” regarding Covid Shots — RIGHT SCOOP:

What do you call it when they create an endless set of steps you have to take to remain a part of society? Because that is what is happening. Think about what we’re being told.

We’re told to stay inside and do nothing until there’s a vaccine and then when we get it we can finally start returning to normal life. Except after the vaccines, they say it’s not enough, keep wearing masks and staying six feet apart and also a bunch of industries and private businesses will have to remain out of work.

That’s not good enough for them, though. So, every day someone on cable news, often CNN’s “Dr.” Wen but often just commentators or even reporters and anchors, goes on air and says how we aren’t harsh enough to unvaxxed, they have to be punished more, they have to be driven from society further. That’s still happening every day.

Except vaccination isn’t vaccination, is it? You have to get a booster too. The covid regime forever…… 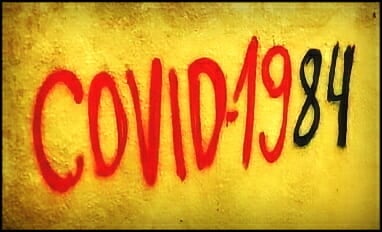 I presume the Left here in the States would love to see.

But first, some polling stats via RIGHT SCOOP:

If you’re unvaccinated, the Democrats want you taken down and taken out, with prejudice. A good word for this situation, which a new poll has laid out in CHILLING detail.

It’s not a complicated result. There’s no nuance. These are the findings. These are the things Democrats want to do. As Rasmussen Reports points out, “Fact Check: True.” 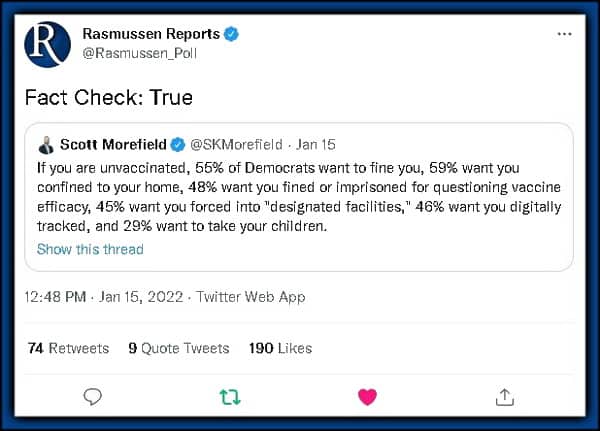 Here are some highlights from Rasmussen.

Fifty-nine percent (59%) of Democratic voters would favor a government policy requiring that citizens remain confined to their homes at all times, except for emergencies, if they refuse to get a COVID-19 vaccine. Such a proposal is opposed by 61% of all likely voters, including 79% of Republicans and 71% of unaffiliated voters.

Forty-five percent (45%) of Democrats would favor governments requiring citizens to temporarily live in designated facilities or locations if they refuse to get a COVID-19 vaccine.

Twenty-nine percent (29%) of Democratic voters would support temporarily removing parents’ custody of their children if parents refuse to take the COVID-19 vaccine.

But believe it or not, I think this is the scariest and most dangerous one of all:

Nearly half (48%) of Democratic voters think federal and state governments should be able to fine or imprison individuals who publicly question the efficacy of the existing COVID-19 vaccines on social media, television, radio, or in online or digital publications.

An article worth reading is this one by AMERICAN GREATNESS: The Nazi Next Door: Your Democratic neighbors won’t be ordered to vote for laws that ostracize you from society, steal your property, or send you away to a concentration camp. They will do it burning with pride.

(Above video description) Scott Morrison’s Calls For FREEDOM at 2021 U.N. General Assembly. Scott Morrison is an Australian politician who is the 30th and current prime minister of Australia The original file comes from DEADACTIVIST, but forces you to watch it on YouTube which is why I uploaded it to my RUMBLE — not to mention it may be nixed at some point due to YT’s aversion to truth and real evil. 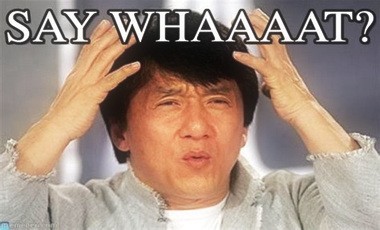 These people (lefty judges on the Supreme Court) are just as clueless as the dopey Democrat behind the Starbucks expresso machine.

PJ-MEDIA notes that this this “false claim can be easily fact-checked thanks to data from the Department of Health and Human Services.” Continuin they continue to say:

…which says that the current number of confirmed pediatric hospitalizations with COVID in the United States is 3,342.

Those are hospitalizations with COVID, not from COVID.

How exactly did Sotomayor get it so wrong? How can a Supreme Court justice so irresponsibly spread misinformation? Further, why should the hospitalization rate matter at all? The issue before the court is not the severity of the disease; it’s the constitutionality of Biden’s mandates. 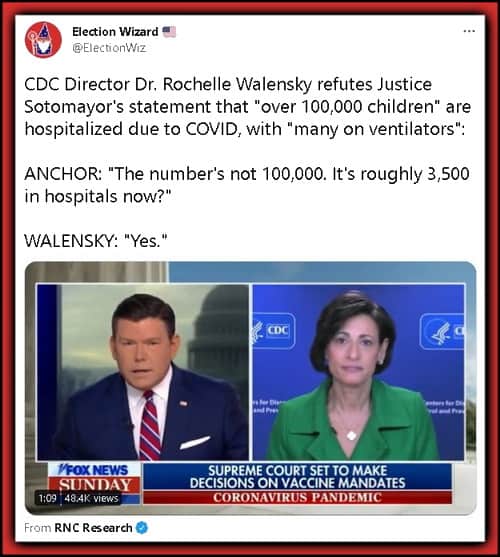 RIGHT SCOOP adds to the data coming in showing that the Lefty SCOTUS members are either lying or horribly misinformed — maybe by CNN? MSNBC?

Sotomayor and Breyer lied through their teeth today about Covid. The media, when they aren’t ignoring this or saying the justices were RIGHT are claiming it was simply error or misspeak. But none of that is true, it was deliberate lying, like we see every day from their fellow activist liberal Democrats across the government and media, to include Fauci, Biden, and the rest.

And new hospital data from New York only shows how BAD of liars they are.

New York has its first official breakdown of what share of people are hospitalized for COVID vs. how many are hospitalized with incidental COVID. In NYC it’s 49% for COVID, everyone else just happened to test positive. pic.twitter.com/fNUmMK2DM9

That’s right. So much for the “overwhelming hospitals” line of bull. If ICUs are full it’s because of procedure, not people coming in due to covid. And that means it’s not a “pandemic of the unvaccinated” too, by the way. 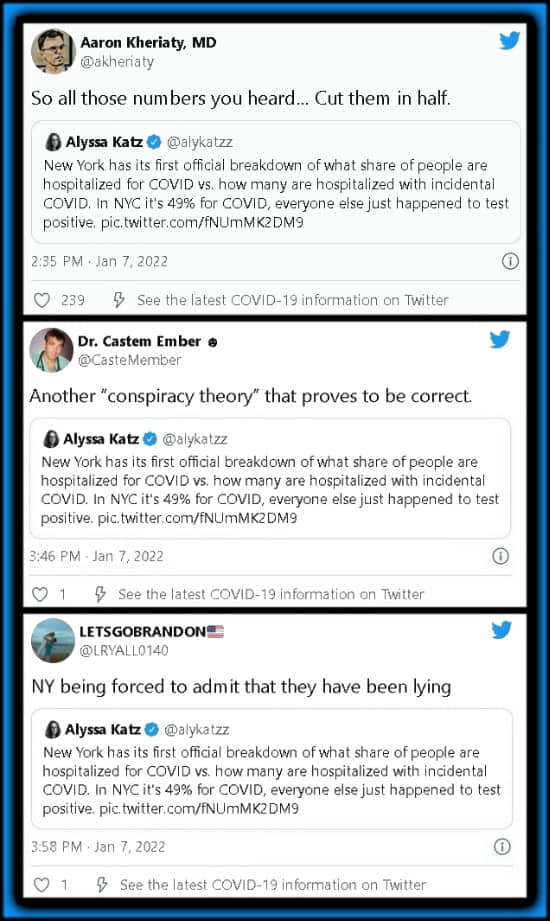 She’s right. This was treated as a conspiracy theory for TWO YEARS and now we know it to be FACT.

And same in Florida last month. 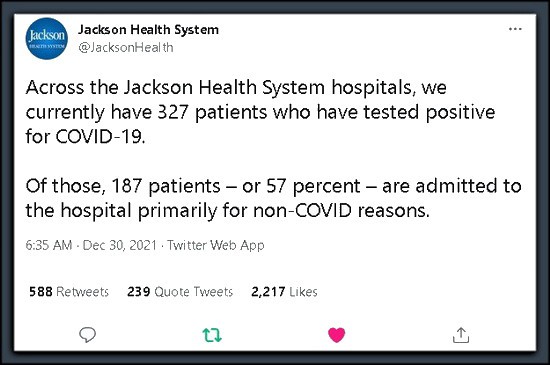 But we have kids in trunks and Biden still pushing for mandates.

Sotomayor: The Stupidest Person to EVER serve on the Supreme Court.