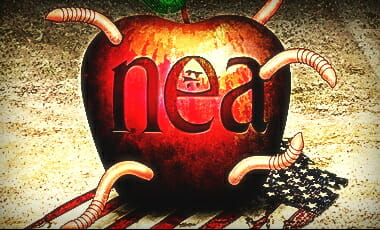 FLASHBACK with “the Hammer”

These two article should be read in union with this post regarding education: “Educayshun (Updated w/White Privilege)“

Two Must Read Articles, the first by THE WASHINGTON TIMES:

The National Education Association (NEA) is aggressively promoting an anti-American, polarizing agenda that is the root of the current racial divisions and rioting. They do this using clever messaging and The New York Times’ much-ballyhooed “1619 Project,” which intentionally perverts American history.

Times writers weave a twisted tale in which the evil of slavery so pervades the American experiment that literally nothing about our history isn’t motivated by some racist need to preserve the intentional subjugation, exploitation, marginalization and persecution of enslaved Africans.

Don’t get me wrong; America’s history is undeniably stained by the dark evil of slavery.

But to rewrite American history as if slavery is the defining and motivating factor behind nearly every aspect of our national story is ludicrous. It’s also dangerous and unethical to reframe history this way; especially considering America confronted the immorality of slavery head-on and defeated it.

The 1619 Project claims slave-owning colonists and hateful bigots hell-bent on institutionalizing racism set the tenor for our nation in 1619. It deceptively obliterates our true inspiration — Christian pilgrims who escaped religious persecution in 1620, launching the freest, most God-honoring “love your neighbor” nation in world history.

“1619” is chock-full of revisionist history promoting racial division and white blame, claiming our founding ideals were a lie purposefully told so whites could enslave blacks to get rich from an evil capitalist system. All this slander promoted by activists posing as journalists, educators and scholars is presented 155 years after hundreds of thousands of Americans (most of them white) gave their lives in the Civil War precisely to put an end to slavery.

It’s no wonder so many historians called out the NYT, but it’s revealing that the NEA did not.

Instead, the NEA coordinated directly with The New York Times, the Pulitzer Center, Southern Poverty Law Center and Black Lives Matter to put 1619 into the hands of educators and activists. Their goal? To assert a false but preferred narrative to advance a political agenda.

To legitimize their tales, the author of 1619 won the Pulitzer Prize, and the NEA praised 1619, saying it “informs and challenges us to reframe U.S. history and better understand the hold of institutional racism on our communities.” The NEA also launched “Black Lives Matter Week of Action” in America’s schools to train our K-12 children, college students and educators in their narrative.

Again, don’t get me wrong. Black lives do matter! Indeed, every human life is sacred. But the organization named Black Lives Matter is not what it claims to be. Like the unions, it’s a Trojan horse of anti-American, anti-family beliefs masquerading as defenders of good.

Now Americans are terrorized by rioters who believe these anti-American narratives, while the NEA quietly launches 1619 and its historical distortions into the history curricula of schools nationwide — virtually unchallenged.

America’s students are taught that the American Revolution was fought not to secure freedom from a tyrannical British Empire, but singularly to protect the institution of slavery.

This ignorance of reality and true history is a major weapon in their arsenal, and they’re pushing a raft of new pseudo-realities onto our culture, too.

No longer is gender defined by science or our Creator; it’s “fluid.”

No longer are environmental claims based on strict adherence to the scientific method; weak theories and hysterical “consensus” rule.

No longer are families seen as the center of a strong society, nor are children expected to obey or respect authority; “willful defiance” reigns while adults cower under the rule of child tyrants.

No longer is history determined by fact; instead, it’s reframed to support a constant assault on our Judeo-Christian culture.

That’s why union activists work behind the scenes ensuring this rubbish from The New York Times passes as approved history curriculum; against the will of good teachers. While The Times stirs up conflict, Black Lives Matter protests attract rioters inciting recurring fear and distraction, and the Pulitzer Center legitimizes 1619, the unions and their coalition stealthily indoctrinate our children and flip our nation’s history on its head. ….

The next article should be paired with this recent post as well: “BLM Is Anti-Christian (BONUS: Carol Swain | Larry Elder)“

In a video from 2015, Black Lives Matter co-founder Patrisse Cullors confesses to being a “trained organizer” and a “trained Marxist,” validating claims the global group might be a radical left-wing organization designed to pander to modern multicultural permutations of Marxist ideology.

Cullors is one of the Black Lives Matter movement’s co-founders, a queer activist, and has advocated for the abolition of prisons.

In the shortened 2015 clip taken from an interview for The Real News Network, Cullors says, “I think of a lot of things: The first thing I think of is that we actually do have an ideology frame.”


She continues, “Myself and Alicia, in particular, are trained organizers. We are trained Marxists. We are super versed on ideological theories, and I think what we really try to do is build a movement that can be utilized by many, many black folk.”

The second comes from THE FEDERALIST:

Remember that Black Lives Matter BlackLivesMatter Pays Homage to Marxist Cop Killer at Every Event It Holds. Here is the Federalist article:

….One recent derivative of this assertion is, “You can’t be Christian unless you affirm that black lives matter.” On the surface, it seems obvious that to properly represent a position that states all men are created in the image of God you would, indeed, need to affirmatively declare black lives matter.

Our Christian faith requires we believe in the intrinsic value of all life. Love for our fellow man is the motivation for promoting life-affirming culture. If our black brothers and sisters feel they’ve been disenfranchised, addressing this carefully is paramount to getting to the truth and healing wounds. Loving and supporting black people’s goal of equity in opportunity is vital for those who hope to see a universal acceptance of the sanctity of all life. As hashtag advocacy goes, #BlackLivesMatter seems self-evident and as nonpartisan as declaring #MeToo if you’re a sexual assault survivor.

But while BLM the organization declares their movement a “natural phenomenon” and its organization decentralized, the hashtag #BlackLivesMatter was intentionally marketed to a specific cause. As such, we must be cautious to clarify that affirming “black lives matter” is different than supporting Black Lives Matter, the 501 (c)(3), its chapters, and its partners.

Christians should limit our use of popular hashtags — primarily #BlackLivesMatter and #HandsUpDontShoot — to share messages regarding equality. Hashtag advocacy leads back to the organizations that create the hashtags. In this case, it means directing friends and family to an overt effort to fundamentally remake the world with socialist ideas—ideas that often directly contradict the message of the gospel.

The Origin of Black Lives Matter

Black Lives Matter began as a social media hashtag intended to bring attention to the death of 17-year-old Trayvon Martin, who was shot by George Zimmerman. The words were a desperate cry for justice. As arguments regarding white supremacy and gun control policy dominated the airwaves, black women were burying their sons. In a country that believed it had finally broken the race barrier, electing our first black president just a few years before, this contradiction was unacceptable.

Since July 2013, Black Lives Matter has grown to 40 chapters worldwide, with 16 located in America. Famous faces and influencers like John Legend, Chrissy Teigen, and Beyoncé Knowles openly support and promote BLM. As a movement, it is here to stay. Yet despite its seeming newness, Black Lives Matter is just part of a movement that has been in existence for decades under different names.

While it’s considered lazy scholarship to declare those who have left politics “socialist,” all three founders of the Black Lives Matter movement have openly shared their desires to end capitalism. In their online articles, videos, and interviews, all three allude to concepts that originate in socialism, communism, or Marxism.

Garza started her organizing career working in abortion advocacy before moving on to groups like NDWA, SOUL, and POWER—which merged with CJJC in 2014, and RTTC—all of which focus on worker and housing activism via anti-capitalist activism.

Cullors works in jail and policing activism as the founder of Dignity and Power Now. Her philosophy rests on the concept of prison abolition and reparations in financial compensation and land redistribution. She promotes BDS—the leftist, antisemitic boycott, divest, and sanction movement—both as a signatory to public statements supporting Palestinians and in articles she’s written. She speaks eloquently about “peoples-led socialist movements” in South America and once was “mentored” by Eric Mann, a former agitator of the Weather Underground domestic terrorism organization.

Virtually all of the spaces Black Lives Matter and its founders inhabit are associated with leftist or openly socialist worker’s movements. All three women have spoken at Left Forum, a think tank for socialists, which engages high-profile communists, socialists, and Marxists as keynote speakers. Speakers include luminaries such as Marxist Silvia Federici and Frances Fox Piven.

They’ve recreated narratives to characterize a law enforcement officer as inherently aggressive and deceptive, even when forensics have shown their position to be inaccurate. While I agree that criminal justice reforms are needed, BLM’s misleading coverage forced the police officer involved in the Brown shooting to go into hiding due to death threats. Although we’re six years removed from 2014, he remains in hiding…..

For decades, teachers’ unions have been among our nation’s largest political donors. As Reason Foundation’s Lisa Snell has noted, the National Education Association (NEA) alone spent $40 million on the 2010 election cycle (source: http://reason.org/news/printer/big-education-and-big-labor-electio). As the country’s largest teachers union, the NEA is only one cog in the infernal machine that robs parents of their tax dollars and students of their futures.

Willing? Dues payments aren’t voluntary in most instances. They get taken from the paychecks of teachers whether they support the NEA or not.

Imagine an education system that spends over $1 billion a year and graduates students who cannot read their diploma. It’s happening in Michigan’s largest city. We meet one of those graduates and the leaders trying to help him. We also show the powerful interests that continue to fight to put the interests of adults first. http://www.kidsarentcars.com

Self-styled “investigative journalist” James O’Keefe has released his latest undercover project. He took a hidden camera into a meeting of the New Jersey Education Association, and heard some pretty astounding things. Check out the video below the fold (WARNING: explicit and vulgar content).