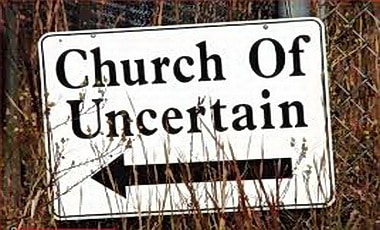 A friend asked the following: “Question… Can you tell me what Liberal Christian means. In short form so Lisa can understand….” The Gospel Coalition defines it thus:

Likewise, a friend noted, “I understand liberal theology as subscribing to the Enlightenment presuppositions concerning naturalism. Thus, liberal theology is skeptical concerning supernaturalism. Like Occam, they look for a logical/natural explanation for everything, including the 10 plagues of Egypt, the virgin birth, and the resurrection.”

But this seemingly short definition is followed by a larger article discussing it’s origins. The enlightenment and the differing forms it took were also heavily influential on liberalism both in religious and political reals, as well as “critical theory” stressed by Jacques Derrida:

Jacques Derrida (1930–2004) was the founder of “deconstruction,” a way of criticizing not only both literary and philosophical texts but also political institutions. Although Derrida at times expressed regret concerning the fate of the word “deconstruction,” its popularity indicates the wide-ranging influence of his thought, in philosophy, in literary criticism and theory, in art and, in particular, architectural theory, and in political theory. Indeed, Derrida’s fame nearly reached the status of a media star, with hundreds of people filling auditoriums to hear him speak, with films and televisions programs devoted to him, with countless books and articles devoted to his thinking. Beside critique, Derridean deconstruction consists in an attempt to re-conceive the difference that divides self-consciousnes (the difference of the “of” in consciousness of oneself). But even more than the re-conception of difference, and perhaps more importantly, deconstruction attempts to render justice. Indeed, deconstruction is relentless in this pursuit since justice is impossible to achieve.

What follows below will travel between the theological aspects of liberalism, as well as the attacks on our Founding documents (political).

Ravi Zacharias does a decent job in showing the basics of liberalism in it’s “questioning” aspect, and that this has been around a long time — that is — the postmodern tendency:

(I deal with the postmodernism of the church and the Emergent Church in my chapter, “Emergen[t]Cy – Investigating Post Modernism In Evangelical Thought“)

The following quotes by the author who put a warning shot across the bow of the modern “liberal” attack of the church… J. Gresham Machen. However, these quotes can in some sense be applied to the Constitution as well (more on this in a bit). 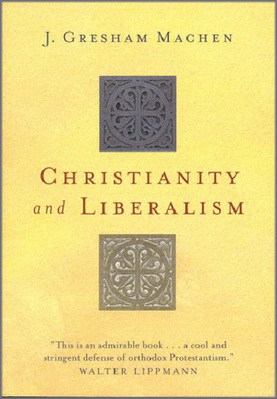 So here is a “Basic” rundown… but a good definition comes from IMPACT 360 INSTITUTE (a long article):

Theology matters because beliefs are connected with behavior. In addition to this fact, one’s theology also reveals the true source of authority serving as the ultimate foundation. Am I going to be faithful to Scripture or conform to what is culturally comfortable? A recent example of this is the book, Untamed, by Glennon Doyle, which is #1 on Amazon’s “Christian self-help” category and currently #1 on the New York Times best-seller list. It is written from a loosely Christian perspective, utilizes Scripture, and speaks about God, faith, Christianity, and morality. It also teaches that you can find God within yourself, promotes moral relativism, teaches that sexuality and gender are fluid, and blames the Bible for creating a culture that oppresses women. 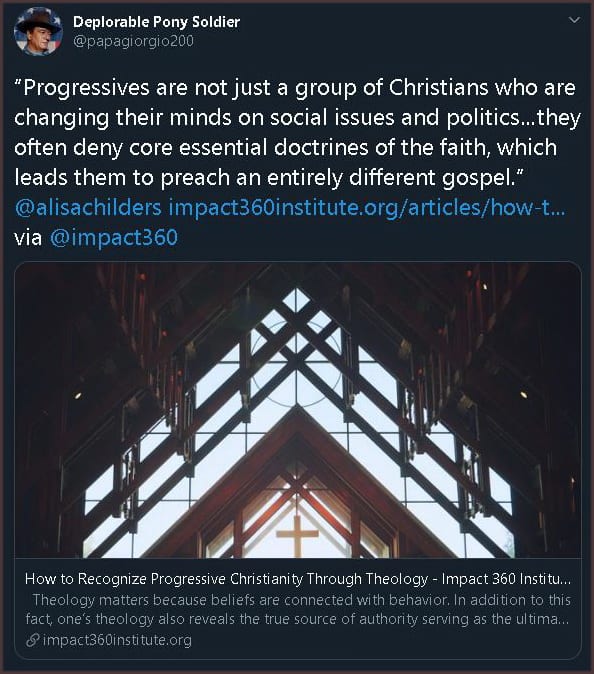 Blogger, speaker and apologist Alisa Childers (author of the IMPACT 360 article [linked] above) talks to us about a dangerous form of Christianity invading our churches.  (Alicia has a YouTube Channel HERE)

Liberal Christianity does not mean a “politically leftist form” of the Christian Faith. Although, the same “sickness” applies that lead to similar outcomes, whether in religious beliefs or political beliefs.

That is, true conservatives conserve ideas born from natural rights, as immutable and objective —  written in stone so-to-speak… the liberal progressive sees things not “in situ” (situated in the original, natural, or existing place or position) but in flux.

Changing in that, modern definitions and understandings supersede the previous outdated ideas and definitions as applied by those earlier thinkers. Dennis Prager talks about a popular saying when he was going to college in the 60’s/70’s, it was,  “don’t trust anyone over 35 [years old].”

What do I mean about the same sickness?

Here is a must read (a bit long) for the avid fan of Dr. Norman Geisler who enumerates the founding “in situ” nature of the political conservationist. He deals with our countries Founding ideas:

THE CONSERVATIVE AGENDA: ITS BASIS AND ITS BASICS

Its Basis and Its Basics

To read the Constitution through an originalist framework means we seek to interpret and apply it in the way people understood it at the time of ratification. Human nature was no different or advanced then as now. In other words, we look at what supporters said each provision meant as they were “selling” the Constitution to the people and trying to overcome intense opposition to ratification. The assertions of supporters served as the basis upon which the ratifiers – the elected representatives of the people – agreed to adopt the Constitution.

The U.S. Constitution is essentially a contract forming a union of states. In any contract, provisions have a fixed meaning. [One author notes that The U.S. Constitution is a Contract, Not a Rule Book] When you sign on the dotted line, you expect them to remain constant over time. When disputes arise, you always attempt to ascertain what the parties believed they were agreeing to. The ratifiers acted with this expectation.

James Wilson was a Pennsylvania lawyer and politician. He was a key member of the Philadelphia Convention that drafted the Constitution, and one of its most influential supporters during the ratification process. His State House Yard Speech laid the foundation for the ratification effort. In 1790 and 1791, Wilson delivered a series of lectures titled Of the Study of Law in the United States. In one of these lectures, he asserted this was the proper way to interpret legal documents.

✦ “The first and governing maxim in the interpretation of a statute is to discover the meaning of those who made it.”

Of course not! Because you would have no idea what that contract really means. And you certainly wouldn’t agree that the other party to the contract gets to decide how it will be interpreted.

Progressives want a living, breathing Constitution because they want to mold society into their own image. They crave power. Originalism constrains power. And despite their lip-service to constitutional fidelity, conservatives want the same thing – power.

But the rule of law requires consistency. Otherwise, government becomes arbitrary. When the limits on government power become subject to reinterpretation by the government itself, it becomes limitless in power and authority…..

The same with Christianity, and how “leftist” progressive Christians see Christianity (even if they do not word as well):

We are living in a day when liberal theology has made deep inroads in the church. Many professing Christians and even ordained ministers no longer believe in the authority of Scripture or the resurrection of Jesus Christ. How can people deny these essential doctrines and still call themselves Christians? In this message, Dr. Sproul explains that liberal Christianity is not Christianity at all. It is nothing more than unbelief.

In this in-person interview, I sit down with Alisa Childers to discuss “Progressive Christianity.” Is this new movement dangerous to Christianity?

What was the infectious inroad into Democrats thinking about the Constitution being alive and breathing? Darwinism and his evolutionary view of biology, via Woodrow Wilson’s impact on progressivism. This is a large excerpt from Gary Demar’s article, Charles Darwin, Woodrow Wilson, And The Evolving Constitution

“In Wilson’s book, Constitutional Government (1908), he came out in favor of implementing a Darwinian view of evolution to civil government.

“Constitutional Government praised the presidency as the central political office: head of the party. This was a self-conscious break from the Constitution’s view of the office. The Constitution does not mention political parties, and the Framers had hated political factions in 1787. Wilson, having switched to Progressivism, had to undermine this older political faith. He turned to Darwin as the solution.

“The framers had been Whigs because they had been Newtonians, he correctly argued. This Newtonian Whig worldview is incorrect, he insisted, and so is the Constitutional order that assumes it. ‘The government of the United States was constructed upon the Whig theory of political dynamics, which was a sort of unconscious copy of the Newtonian theory of the universe. In our own day, whenever we discuss the structure or development of anything, whether in nature or in society, we consciously or unconsciously follow Mr. Darwin; but before Mr. Darwin, they followed Newton.

Some single law, like the law of gravitation, swung each system of thought and gave it its principle of unity’ (pp. 54-55). The checks and balances built into the Federal government by the Constitution are now a hindrance to effective political action, he said. This language of balances reflects mechanism. We need to overcome this mechanical way of thinking, Wilson wrote.

“The trouble with the theory is that government is not a machine, but a living thing. It falls, not under the theory of the universe, but under the theory of organic life. It is accountable to Darwin, not to Newton. It is modified by its environment, necessitated by its tasks, shaped to its functions by the sheer pressure of life. No living thing can have its organs offset against each other as checks, and live. On the contrary, its life is dependent upon their quick cooperation, their ready response to the commands of instinct or intelligence, their amicable community of purpose. Government is not a body of blind forces; it is a body of men, with highly differentiated functions, no doubt, in our modern day of specialization, but with a common task and purpose. Their cooperation is indispensable, their warfare fatal. There can be no successful government without leadership or without the intimate, almost instinctive, coordination of the organs of life and action” (pp. 56-57).

Does any of this sound familiar? The Constitution is a “living, evolving document” to be directed in its evolutionary development by leaders who believe that government is the divine force for change.

So the next time you hear someone talk about how the Constitution is a living document, think of Woodrow Wilson, but more specifically, think of Charles Darwin.