This is Part IV of a series from Christmas 2014.

The climate models used by alarmist scientists to predict global warming are getting worse, not better; carbon dioxide does far more good than harm; and President Obama has backed the “wrong side” in the war on “climate change.”

So says one of the world’s greatest theoretical physicists, Dr Freeman Dyson, the British-born, naturalised American citizen who worked at Princeton University as a contemporary of Einstein and has advised the US government on a wide range of scientific and technical issues.

In an interview with Andrew Orlowski of The Register, Dyson expressed his despair at the current scientific obsession with climate change which he says is “not a scientific mystery but a human mystery. How does it happen that a whole generation of scientific experts is blind to the obvious facts.”

This mystery, says Dyson, can only partly be explained in terms of follow the money. Also to blame, he believes, is a kind of collective yearning for apocalyptic doom.

It is true that there’s a large community of people who make their money by scaring the public, so money is certainly involved to some extent, but I don’t think that’s the full explanation.

It’s like a hundred years ago, before World War I, there was this insane craving for doom, which in a way, helped cause World War I. People like the poet Rupert Brooke were glorifying war as an escape from the dullness of modern life. [There was] the feeling we’d gone soft and degenerate, and war would be good for us all. That was in the air leading up to World War I, and in some ways it’s in the air today.

Dyson, himself a longstanding Democrat voter, is especially disappointed by his chosen party’s unscientific stance on the climate change issue.

It’s very sad that in this country, political opinion parted [people’s views on climate change]. I’m 100 per cent Democrat myself, and I like Obama. But he took the wrong side on this issue, and the Republicans took the right side…..

“I am hoping that the scientists and politicians who have been blindly demonizing carbon dioxide for 37 years will one day open their eyes and look at the evidence.”

We need MORE CO2, not less!

Dr. William Happer, currently a professor of Physics at Princeton University, was once fired by Gore at the Department of Energy in 1993 for disagreeing with the vice president on the effects of ozone to humans and plant life, also disagrees with Gore’s claim that manmade carbon dioxide (CO2) increases the temperature of the earth and is a threat to mankind. Happer appeared before the U.S. Senate’s Environment and Public Works Committee on Feb. 25 and explained CO2 is in short-supply in relative terms of the history of the planet.

“Many people don’t realize that over geological time, we’re really in a CO2 famine now. Almost never has CO2levels been as low as it has been in the Holocene [geologic epoch] – 280 [parts per million (ppm)] – that’s unheard of,” Happer said. “Most of the time, it’s at least 1,000 [ppm] and it’s been quite higher than that.”

Happer said that when CO2 levels were higher – much higher than they are now, the laws of nature still managed to function as we understand them today.

“The earth was just fine in those times,” Happer said. “You know, we evolved as a species in those times, when CO2 levels were three or four times what they are now. And, the oceans were fine, plants grew, animals grew fine. So it’s baffling to me that, you know, we’re so frightened of getting nowhere close to where we started.”…

Here is a quick intro that I combined with a great visual in reagrds to PPM and how it is benefitial to mankind:

He mentioned most of the experts KNOW how CO2 affects climate. He says he does not and doesn’t think they do either. This has nothing to do with the supposed “consensus” of experts — 97% — who “say” it is driven by mankind. This is known as anthropogenic global warming, of AGW. The myth of the 97% started with ONLY 75-out-of-77 climatologists saying they believe man is the primary cause.

Another study has undergrads and non-specialists (bloggers) search through many articles in peer reviewed journals, and noting that a large majority supported the AGW position. The problem was that they were not specialized in the field of science… AND… they only read the abstracts, not the peer reviewed paper itself. Many of the scientists behind the papers “said” to support AGW rejected that idea. So the specialists THEMSELVES said their papers cannot be read to support the AGW position.

Another study (pictured in the graph above) tries to save an earlier one with tainted information based on abstracts — a very UNSCIENTIFIC way to get to consensus (that is, relying on abstracts). Not only was this study based on abstracts, again, non specialists categorized them. Yet another study was merely based on search parameters/results. Here is more info (mainly links) for the not-faint-of-heart.

In reality, nearly half of specialists in the fields related reject man causing climates change. And a good portion of those that do reject the claim that it is detrimental to our planet.

This is meant mainly as a supplement to a Christmas Eve-Eve gathering/discussion I was at. I will make this post  a little different than other posts, as, it will be “minimalist.” This is the fourth installment of the topics covered, which are polar bears, rising sea levels, CO2, Inconvenient Truth (the movie), nuclear power, warmest year, electric vehicles (EVs)/hybrid cars, and bullet trains.

Can you imagine the polluted, destroyed, world we would have if the left had their way with green energy?

But asking someone who has swallowed this story is like beating a dead horse. They will tell me — to my face — that mankind releasing CO2 into the atmosphere is driving weather changes (MRCTV FILE). 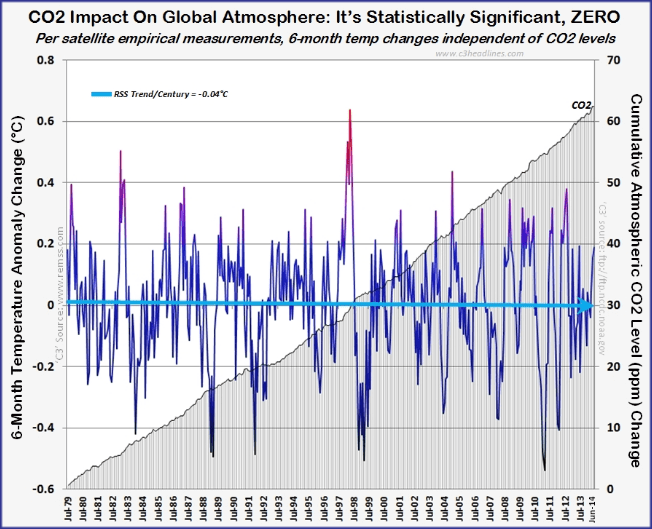 Study-after-study, notes that CO2 productions lags behind temperature rising… not the other way around (as the above video notes). IN OTHER WORDS, many proponents of anthropogenic global warming that view man’s harmful creation of CO2 as a driving force behind the issue seem to have the “script flipped,” to put it mildly.

Here is just one example of “The Phase Relation Between Atmospheric Carbon Dioxide And Global Temperature,” discussed at THE HOCKEY SCHTICK: 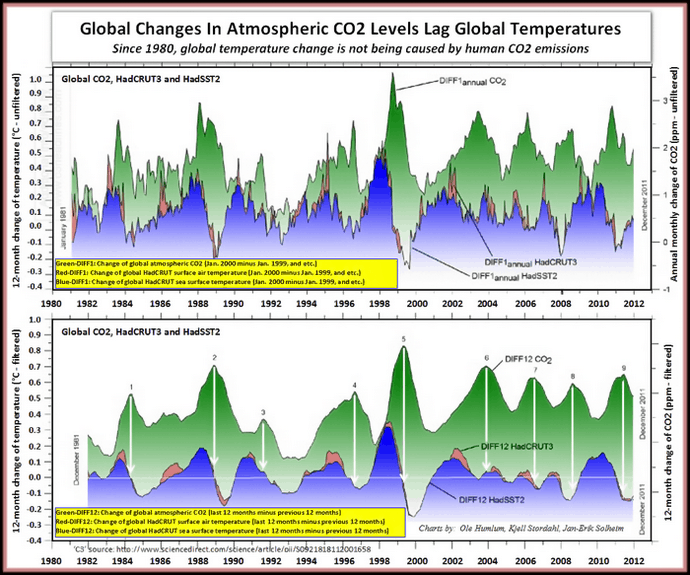 As well as ICE-CORES showing a higher PPM of CO2 in our past than today:

But really, an increased CO2 has been historically beneficial to our planet, as well as theoretically good for us. See Also, “Dr. William Happer Speaking To The Benefits Of CO2.”

This comes by way of Gay Patriot (sadly closed now), and shows how scientific the party of science is: