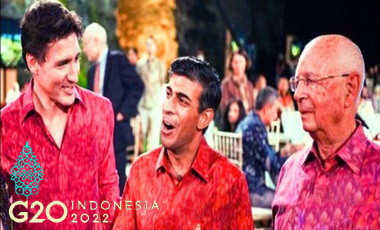 These three excerpts from the videos below are related in that the New World Order has simply been people in power who want no borders and power to decide for others how they should live and eat for the betterment of the world and their egos. Control of Elections, control of lives – bigger government… the wet dream of the Left throughout history. From Lycurgus (Sparta) to Soros/Schwab. The DNC is onboard for a borderless, “world worker” collective.

The son of famous atheist, Madalyn Murray O’Hair, notes the collective nature of Sparta and man’s search to be like God since the Garden (Genesis 3:1; 5 —  “…did God really say…. For God knows that in the day you eat from it your eyes will be opened, and you will be like God, knowing good and evil.” Planning for mankind what man thinks is good/bad apart from God’s revelation.):

The Grecian city-state of Sparta and Plato’s descriptions of the supposedly perfect society in his Republic and in the Laws (a twelve-book series) have been the inspiration for utopian tyrants throughout history. Sparta was a collectivist, centrally planned city-state. Individuality was discouraged, and all were expected to live their lives in obedience to the dictates of the totalitarian leadership. Boys were raised from birth to be soldiers and not much more.

Sparta moved to utopian tyranny under the rule of Lycurgus, who imposed a series of laws on the Spartans around 800 BC. Lycurgus turned Sparta into a disciplined war machine, a country where freedom was nonexistent and where cultural creativity died. Regrettably, his influence over this nation-state lasted some five hundred years. Sparta eventually decayed from within, and outside invasions decimated its population.

Before Lycurgus imposed his draconian laws upon Spartan’s citizens, there had been art and creativity in the city-state’s culture; however, Lycurgus ordered all Spartans to disregard art (with the exception of some martial-style songs, music, and poetry). He taught them to distrust philosophy and to avoid excess in all things. Even their speech patterns were restricted to avoid pointless chatter, gossip, or too much speaking of any kind.

The historian Plutarch described how Lycurgus traveled to other parts of the known world to study various forms of government and cultures before returning to Sparta to implement his totalitarian plans. lie searched for a society based on virtue and a warrior ethos. Lycurgus then traveled to the Greek Oracle of Delphi (a priestess of the god Apollo) to obtain instructions from the “gods” on how to rule Sparta, or at least claimed that as his purpose.

According to Plutarch, the oracle taught Lycurgus that he himself was a “god” and confirmed his ruthless plans for governing Sparta as purposed by the gods.

With apparent “divine” approval through this mystical oracle, Lycurgus began to remake Sparta in the utopian image he imagined. Plutarch related how he first established a council of elders who would have an equal vote with the two kings who ruled Sparta at the time. According to Plutarch, “eight-and-twenty elders would lend the kings their support in the suppression of democracy, but would use the people to suppress any tendency to despotism.”

Long before Karl Marx, Lycurgus was the ideal collectivist and cen­tral planner. He believed that Sparta’s citizens were the property of the state and that they had no higher purpose than to obey the dictates of the rulers throughout their lives. The concept of individual liberty and of freedom of conscience and action soon became nonexistent in Sparta. The state rather than the family was the center of each person’s life.

Unlike Marx or Lenin, Lycurgus never produced an overall doctrine in writing for Sparta. Using this tactic, he could add to the rules or change them as he pleased, just as other despotic rulers over Sparta did who followed after his death.

As a good collectivist, Lycurgus hated wealth and private property, so he decided that wealthy landowners should be stripped of all their property so it could be given to the poor. He engaged in what current collectives describe as “redistributing” the wealth. In the twentieth century, Communists called this land-theft process “agrarian reform.” According to Plutarch, Lycurgus accomplished this without murder:

Lycurgus abolished all the mass of pride, envy, crime, and luxury which flowed from those old and more terrible evils of riches and poverty, by inducing all land-owners to offer their estates for redis­tribution, and prevailing upon them to live on equal terms one with another, and with equal incomes, striving only to surpass each other in courage and virtue, there being henceforth no social inequalities among them except such as praise or blame can create.

Lycurgus also hated the concept of money because it supposedly resulted in greed and avarice. His solution was to abolish the use of gold and silver money and to make iron money the only legal tender in his city-state. The iron money was so large that it had to be carried by a yoke of oxen. The destruction of the gold and silver standard also made it impossible for Sparta to effectively trade with other countries.

Lycurgus controlled every aspect of Spartan life. There were even precise regulations as to how a Spartan home could be roofed. The beams of each house had to be constructed with an axe, while the doors had to be built with a saw and no other tools.

Lycurgus was an advocate of infanticide, which became an insti­tution in Sparta. Whenever a child was born, it was considered state property and, if a boy, he was destined to spend most of his life training or engaging in warfare against Sparta’s enemies. Thus, he had to be strong and indifferent to pain and privation. Babies that appeared to have defects or weakness at birth were eliminated, as they could not serve the Spartan state and thus had no value.

The manner of death of the unwanted babies was not as sterile as it is today at a Planned Parenthood clinic. Newborns were taken to a group of elders for examination. If those elders chose a child for disposal, it was taken to the top of a mountain cliff and thrown off, to be eaten by wild animals.

crops and services to the Spartan elites. To keep the Helots enslaved and in constant fear, Sparta’s leaders created a secret police much like the Soviet KGB or the Nazi Gestapo to terrorize them on a regular basis. This force was called the Krypteia.