LAS VEGAS — Hundreds of journalists declined to stand during the national anthem at the Democratic debate at the Wynn Las Vegas, with only 20 out of nearly 400 rising from their seats, some recognizable from conservative media outlets…. 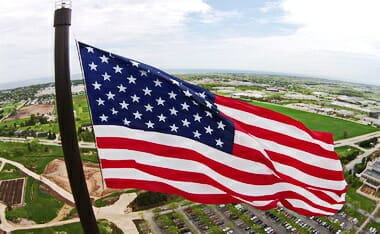 I have to note that when the shit hits the fan, all the weenie hipster vegans will tire easily. 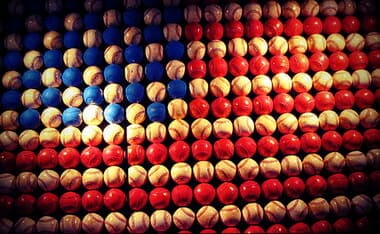 I don’t normally post anything else today other than my “Memorial Day” post, but this is fitting, and Patriot. It comes by way of Libertarian Republican:

Before the NCAA Softball Regional game between the University of Louisiana-Lafayette and Baylor University (May 19), it was announced that there would be no playing of the National Anthem. (This was the third game of the day, and the National Anthem had been played prior to the first two.)

The fans had another idea. They sang the national anthem.

Dennis Prager discusses how liberalism distorts clear thinking on many issues… this one being even the patriotic act in a photo being included in the 9/11 museum. Below is another example by Prager in music. From what I can gather from the last comments, is that Bill Maher’s audience was chanting “four more years, four more years….”, but couldn’t get into chanting “USA, USA…”

Must post the following from The Blaze, a fun read:

The news today is riddled with references to the Navy’s elite “SEAL Team 6,” the team being hailed for killing Osama bin Laden. But what exactly is SEAL Team 6? For most people it’s the stuff of Tom Clancy and Brad Thor novels. But in the spy and military world, it is an elite black ops fighting group shrouded in secrets that reports to the president himself.

“Officially, the team’s name is classified and not available to the public,” Business Insider writer Robert W. Johnson reports, “technically there is no team 6. A Tier-One counter-terrorism force similar to the Army’s elusive Delta group, Team 6′s mission rarely make it to paper much less the newspaper.”

The members of Team 6 are all “black” operatives. They exist outside military protocol, engage in operations that are at the highest level of classification and often outside the boundaries of international law. To maintain plausible deniability in case they are caught, records of black operations are rarely, if ever, kept.

The development of SEAL Team 6 was in direct response to the 1980 attempt to rescue the American hostages held in Iran. The mission was a terrific failure that fell apart at many points and illustrated the need for a dedicated counter-terrorist team capable of operating with the utmost secrecy.

Johnson explains the name is allegedly an intentional lie that dates back to the time of the Cold War. At the time, there were only two other SEAL teams and the name was meant to confuse the Soviets.

National Journal explains more about Team 6′s name, which is really only a leftover nickname. Now, the group is officially known as the Naval Special Warfare Development Group. NJ explains who the team reports to and what happens when one of the members is killed:

DevGru belongs to the Joint Special Operations Command, an extraordinary and unusual collection of classified standing task forces and special-missions units. They report to the president and operate worldwide based on the legal (or extra-legal) premises of classified presidential directives. Though the general public knows about the special SEALs and their brothers in Delta Force, most JSOC missions never leak. We only hear about JSOC when something goes bad (a British aid worker is accidentally killed) or when something really big happens (a merchant marine captain is rescued at sea), and even then, the military remains especially sensitive about their existence. Several dozen JSOC operatives have died in Pakistan over the past several years. Their names are released by the Defense Department in the usual manner, but with a cover story — generally, they were killed in training accidents in eastern Afghanistan. That’s the code.

According to the Atlanta Journal-Constitution, members of the team don’t apply for the team, the team picks its members.

The highly trained operatives who killed Osama bin Laden are part of a counterterrorism group so specialized that no one can apply to join it.

Instead, they are recruited. They are chosen from existing SEAL teams, making the unit an elite within an elite.

That may be only partly true, though. National Journal says members in general can be recruited from a variety of places including the CIA.