Woe to those who call evil good and good evil,
who put darkness for light and light for darkness,
who put bitter for sweet and sweet for bitter!
(Isaiah 5:20) 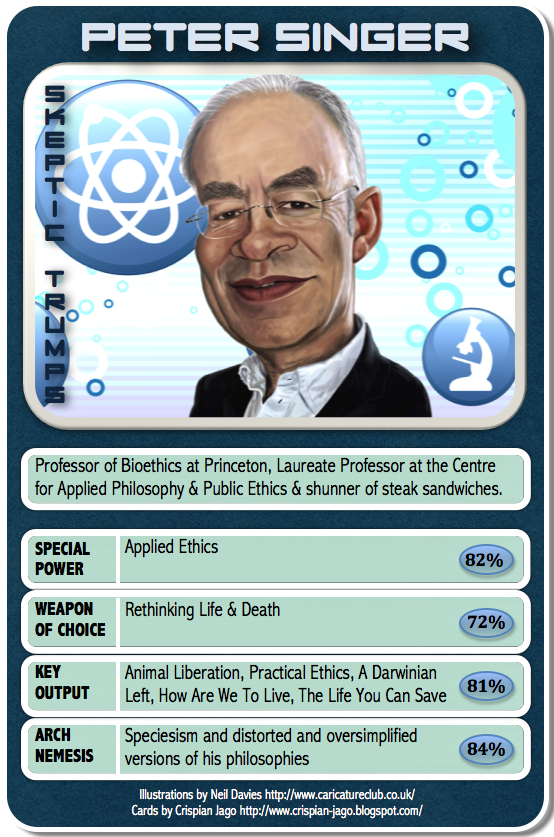 The Daily Caller note the upside-down world of the left

According to Fordham’s media relations website, Singer, a tenured Princeton bioethics professor, spoke from 4 to 6 p.m. in a panel the university promised “will provoke Christians to think about other animals in new ways.”

Singer has long lamented the societal stigma against having sex with animals.

“Not so long ago,” Singer wrote in one essay, “any form of sexuality not leading to the conception of children was seen as, at best, wanton lust, or worse, a perversion. One by one, the taboos have fallen. But … not every taboo has crumbled.”

In the essay, titled “Heavy Petting,” Singer concluded that “sex across the species barrier,” while not normal, “ceases to be an offence [sic] to our status and dignity as human beings.”

“Occasionally mutually satisfying activities may develop” when humans have sex with their pets, he claimed.

In his 1993 essay “Taking Life,” Singer, in a section called “Justifying Infanticide and Non-Voluntary Euthanasia,” wrote that “killing a disabled infant is not morally equivalent to killing a person.”

“Very often it is not wrong at all,” he added, noting that newborns should not be considered people until approximately a month after their birth.

Here is the meaning to Psy (sounds like sy) and lyrics:

…Psy has described the song as a tribute to the ladies of the wealthy district.

With that in mind, we found the English translation to the viral sensation so we could shed some light on the catchy number….

(Think of PSY’s treatment of “Gangnam” as a parallel to the United States’ love-hate relationship with the Jersey Shore. Though, PSY says Gangnam is equivalent to our Beverly Hills.)

You know what I’m saying
Oppa is Gangnam style

Misleading Stats ~ You Have To Dig To Find the Real Stats!

A good example of this is the recent poll my boss came in and disparagingly said “Romney’s down 10% in Ohio.” I waited till I got home and found out that the poll sampled Democrats at 35%, and Republicans at 27%. So while the race is close however, Obama is not leading by 10% — which is why it is categorized as a swing state.

I was thinking it was only a 4% lead that Carter had… in fact, three weeks BEFORE the election Carter rose to 47% and Reagan dropped to 39%! (Posted by: Religio-Political Talk) Remember, Reagan took 44-States, he blew Carter out of the water! Then doc Rove shows the lopsided polls in regards to Democrats and Republicans. WOW!

Hot Air makes the point that this crazy class warfare does have consequences. Lower revenue!

In light of President Obama’s exhortation to hike taxes on those making more than $250,000 a year earlier today, here’s a well-timed piece of evidence demonstrating what happens when you decide you’d rather engage in populist persecution and punish the wealthy for their economic contributions rather than make tough budget-cutting decisions. A new report indicates that the state of Maryland is bleeding residents and tax revenue — an emigration likely due to the wildly blue state’s recent tax hikes.

The study, by the anti-tax group Change Maryland, says that a net 31,000 residents left the state between 2007 and 2010, the tenure of a “millionaire’s tax” pushed through by Gov. Martin O’Malley. The tax, which expired in 2010, in imposed a rate of 6.25 percent on incomes of more than $1 million a year.

In total, Maryland has added 24 new taxes or fees in recent years, Change Maryland says. Florida, which has no income-tax, has been a large recipient of Maryland’s exiled wealthy.

“Maryland has reached the point of diminishing returns. We’re taxing people too much and people are voting with their feet,” said Change Maryland Chairman Larry Hogan. “Until we change our focus from tax increases to increasing the tax base, more people are simply going to leave, leading to a downward spiral of raising revenues on fewer citizens.”

In 2011 alone, a record 1,800 individuals renounced their United States citizenship — and if that doesn’t provide a red flag about our tax code, I don’t know what does.

Here’s just one case in point that broke earlier today:

Denise Rich, the wealthy socialite and former wife of pardoned billionaire trader Marc Rich, has given up her U.S. citizenship – and, with it, much of her U.S. tax bill.

Rich, 68, a Grammy-nominated songwriter and glossy figure in Democratic and European royalty circles, renounced her American passport in November, according to her lawyer. …

By dumping her U.S. passport, Rich likely will save tens of millions of dollars or more in U.S. taxes over the long haul, tax lawyers say.

(CBS News) When Facebook begins selling its stock, several people who own part of the company will become billionaires.

One of them is getting a lot of flack, because he’s giving up his U.S. citizenship right before Facebook goes public. That will save Eduardo Saverin a fortune in taxes.

Saverin is being hailed in some quarters for drawing attention to high taxes. He plans to continue living the high life, in Singapore, where there are no capital gains taxes.

(Another interesting story, even the criminals get it)

…From January to April 2004, the ABC and CBS evening news shows only mentioned Kerry’s wealth once each. And NBC didn’t mention Kerry’s finances or his wife’s wealth at all. Those same three networks have discussed Romney’s wealth a total of 27 times during the same time period in 2012. That’s more than 13 times more than the coverage given Kerry’s wealth (27 stories to 2 stories)…

As the program began, O’Reilly said, “Shortly after 11PM on April 14, 26-year-old Marjon Rostami and 31-year-old David Forster were coming home from the theater when someone threw a rock at their vehicle.”

The pair worked for the local paper the Virginian-Pilot.

Forster got out to confront the rock-thrower only to be set upon by approximately five African-Americans who beat him.

Rostami got out of the car to help her boyfriend leading her to be attacked as the car was surrounded by a crowd of about 30 people.

She ended up calling 911, and the police filed a report describing the assault as a suspected hate/bias crime arresting a sixteen-year-old. That has since been changed; police are no longer claiming it was a hate/bias crime.

However, Fox News’s Jesse Waters interviewed a witness to the event who verified Rostami and Forster’s account claiming that he felt this was a racial episode tied to the Trayvon Martin incident in Florida.