Personal Statement: J-and-J in May 2020, boosted with Covid, end of December. Raging headache for days. Like a bad cold, slight fever for 2-days, have lost all sense of smell and taste….just in time [/sarcasm] to try out my wife’s Christmas present – an air fryer.

A few thoughts on a Martin Luther quote I have seen used since 2020… first, the quote fashioned by RPT 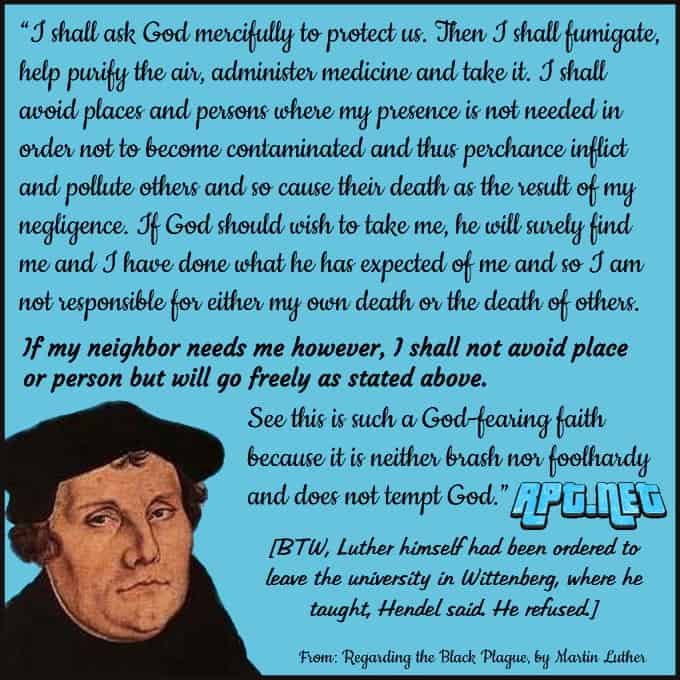 I am only writing this post because I have just seen a similar Luther quote [albeit mine is more complete] on the Facebook of someone that should know better. One commentor noted:

I responded thus (with a slight addition):

Really? A quote about the Black Plague?

The Bubonic plague was a deadly pandemic that wiped out a massive chunk of population in the World during the mid-1300s. In Europe alone the plague wiped out nearly 50% of Europe’s population. Some estimates even claim that Black Death wiped out around two-third of Europe’s population. According to National Geographic the plague killed around 25 million people, almost one-third of Europe’s population (National Geographic). The plague also killed half of London’s population in almost 4 years (Sciencemag). The Bubonic plague is reported to have killed an estimated 75–200 million people (Shipman). Historians report that people died rapidly. The streets were filled with corpses mounted over each other. And the priests were too scared to perform the death rites. Florence, a city of Italy, alone is reported to have 50,000 deaths out of a population of 80,000. The mortality rate was as high as 50% during the Bubonic plague era. (Joshua Mark)

….How serious is Covid-19 exactly? And how will the outcome of the pandemic differ if vaccines were mandatory rather than optional? What additional loss of life can be expected if we do not make vaccination compulsory?

That Covid-19 is serious is beyond question. But let’s look at a few markers to help us evaluate the severity of the risk to humanity.

The deadly Spanish Flu from 1918-1920 is estimated to have killed somewhere between 20-50 million people, or close to 3% of the world’s population. By contrast, Covid-19 has so far killed about 5.3 million people in two years. That represents about 0.07% of the global population.

How deadly is Covid-19? The overall infection fatality rate (IFR) of Covid has been estimated to be between 0.1% and 0.2%. Quoting from an analysis by Professor John P.A. Ioannidis of multiple studies which calculated inferred IFR by seroprevalence data:

“Interestingly, despite their differences in design, execution, and analysis, most studies provide IFR point estimates that are within a relatively narrow range.  Seven of the 12 inferred IFRs are in the range 0.07 to 0.20 (corrected IFR of 0.06 to 0.16) which are similar to IFR values of seasonal influenza. Three values are modestly higher (corrected IFR of 0.25-0.40 in Gangelt, Geneva, and Wuhan) and two are modestly lower than this range (corrected IFR of 0.02-0.03 in Kobe and Oise).” (emphasis mine).

For people under 60, the IFR is much lower still. And for vaccinated people, the risk of death from Covid-19 is reduced about ten fold.

For a vaccinated person, the risk of Covid-19 is no worse than seasonal influenza.

And this was before Omicron, the new variant which looks set to become the dominant strain around the world in the coming weeks, and so far appears to cause much milder symptoms and a much lower fatality rate. Why are we still in panic mode?

Over the last two years, there were roughly 120 million all cause deaths. Only 5.3 million of those (less than 5% of all deaths) were Covid-19 deaths. Thanks to the media’s scaremongering, there are many people who seem to think that Covid-19 was the leading cause of death in 2020 and 2021. Based on historical mortality data we can estimate that deaths due to cardiovascular disease probably exceeded 40 million over the last two years, while cancer deaths are likely to have exceeded 20 million. That reality does not nullify or make light of the tragic 5.3 million Covid-19 deaths so far. But it helps to put Covid-19 in perspective. …..

AGAIN, this is in no way parallel to even the 1793 Philadelphia yellow fever epidemic. The city had reached about 50,000 residence, and over the course of the fever 5,000 died. That is 5% of that cities population. Comparing…

Keep in mind in March of 2020 I noted that the rates would be from 0.03% to 0.25% — not to brag or anything, but I am in the 23-studies lane-lines of the Stanford study mentioned in June. I just couldn’t differentiate between age groups, but that was assumed as the average age of deaths.

All this is to say is that to compare such an even is at best a non-sequitur. Much like the same person’s comparing

Dr. Sarfati, with whom I agree on most things, shows unfortunately his twisted logic on vaccines — all the while calling those who disagree with his position in the slightest: anti-vaxers.”

Here is his posting:

Anti-vaxers: Is there any other vaccine in history that required three doses in a year and yet still didn’t prevent transmission of the virus it was meant to protect against?

Reality: remember your childhood vaccines which kept you safe and which you are depriving your children from.

Here are the two responses I wish to note:

S.L. – I shouldn’t respond because I am not an ‘anti-vaxxer’ (I am vaccinated with every vaccine my GP recommended), but I’d just like to comment on this vaccine schedule. I (and most people my age) received FAR less vaccinations that suggested on the above or the current schedule in Australia. I received 6 vaccinations in my first five years of life in Germany in 1970: tuberculosis, smallpox, measles, diphtheria, polio and whooping cough. Some of these were boosted ONCE. So apart from the occasional influenza vaccine (which I take when the ‘season’ looks particularly ominous) I have had perhaps 15 shots in my life. My children (born in the early millennium in Australia) had many additional vaccinations but still not as many as required above. We followed the increased schedule but spaced out and separated the MMR vaccines at the suggestion of our pediatrician at the time. We also refused the HPV vaccine for both children at 14. They were not about to be sexually active. We decided (with them) that they can choose to take the HPV vaccine as adults. Both kids (19 and 22) are healthy and have always been. Same with me – though I’ve worked in education all my life i.e.. in contact with many different people every day and exposed to every ‘childhood disease’ outbreak you can think of. I have no compelling reason to accept uncritically that vaccinations requirements should have needed to go up the way they have because someone wants to improve our health. lol.

Here is my response as well… a bit shorter:

ME – I honestly do not know. Are those doses minimized due to age? And a single or two dose be given to adults? To Wit…. 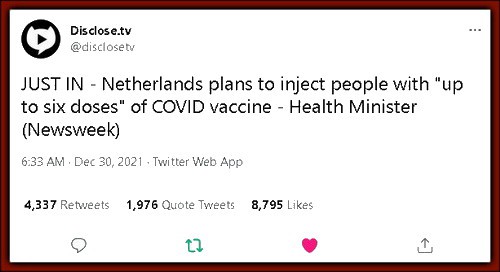 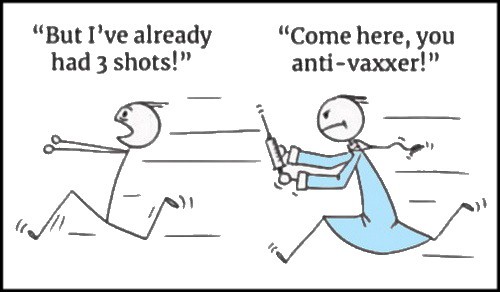 To support my observational question…. well, somewhat answer it — the ATLANTIC notes the following:

Historically, variola major [smallpox] has a case-fatality rate of about 30% (FDA | TIME). In the United States, the 1952 polio epidemic became the worst outbreak in the nation’s history. Of the nearly 58,000 cases reported that year, 3,145 died and 21,269 were left with mild to disabling paralysis.

So, even if say 3 adult vaccination shots are needed for such a horrible disease… to require boosters and laws regulating Covid “vaccines,” is not where the evidence leads. The fatality rates and survivability of Covid compared and an argument for vaccinations is moot. Both in the IFR, CFR, and the efficacy of these “vaccines” for Covid are the basis to reject such logic in the OP (original post).

I have also in the past questioned the death rate and other factors are wildly overcounted.

Two examples from this post to make a point:

A pair of gunshot deaths that counted among COVID fatalities have earned the ire of a county coroner in Colorado. Grand County, in the sparsely-populated (but breathtaking) northwestern quarter of the state, is home to fewer than 15,000 people and has been lucky enough to endure only a handful of deaths related to the Wuhan Virus.

Bock sounded furious in her interview with CBS4 News in Denver, and with good reason. Grand County’s economy is heavily reliant on tourism, and as Bock told CBS4, “It’s absurd that they would even put that on there.”

“Would you want to go to a county that has really high death numbers?” she asked, presumably rhetorically. “Would you want to go visit that county because they are contagious? You know I might get it, and I could die if all of a sudden one county has a high death count. We don’t have it, and we don’t need those numbers inflated.”

Bock told CBS4 that because the victims had tested positive for COVID-19 within 30 days of having been shot, the county classified them as “deaths among cases.”

That’s a curious definition, but one required by the national reporting rules created by the Centers for Disease Control and Prevention….

First Omicron Death (With or Of)

I think these stories are related to the non-sequitur nature of the OP… in that it is a false equivalency:

Martin Luther would surely be on the “keep society open” side considering the evidence.