I heard about the “Twitterverse” not even allowing a story by the NEW YORK POST to grace their site. When I got home I tried it. And sure enough, the story would not post. So I tried it again early this morning… nope: 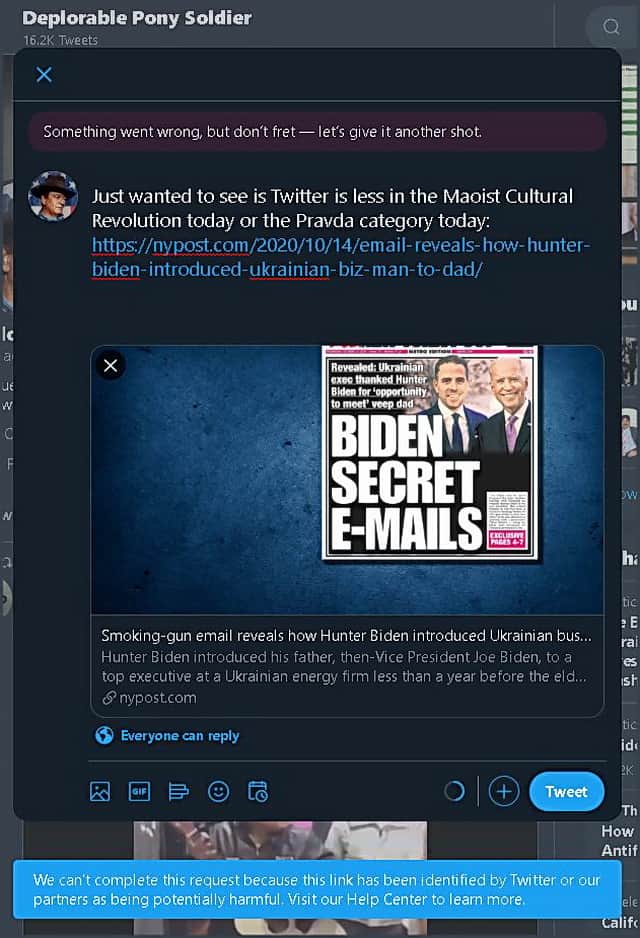 I just tried it again this evening. HUGH HEWITT in his first hour played Tucker Carlson and then the President… I also include a call from Detective Tom – as – he asks good questions as usual.

The real story now as well is the idea that Twitter and Facebook can control what they feel is a hoax and what is genuine news. As the NEW YORK POST reasonably asks: “If ‘unreliable’ is the issue, why did social media never block anti-Trump stories?” Indeed… they continue:

….Misinformation? Lack of authoritative reporting? The story explained exactly The Post got the material, and the supporting evidence. Yet the past four years have seen left-of-center outlets devote millions of column inches to anti-Trump stories that turned out to be utter bunk — yet neither Facebook nor Twitter took similar action as part of any “standard process”:

The Post will continue to chase the truth wherever it takes us. But this episode should alarm ­every American. A very few people can unaccountably shape what you read.

This is how freedom dies.

The New York Post has published two bombshell stories that raise more questions over whether Joe Biden abused his power as the vice president of the United States for the financial benefit of his family. It’s a made-for-TV tale of foreign business dealings, money, corruption, and power – and the social media gods really, really don’t want you to read it.