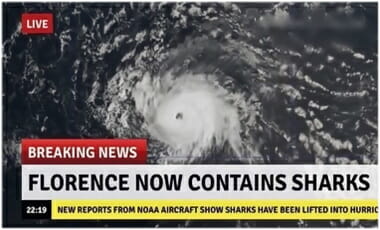 (JUMP TO the latest tornado stats)

People are wrong to blame man for hurricanes.

Comedian Trevor Noah asks “how many once-in-a-lifetime events is it gonna take… for everyone to admit that maybe man-made climate change is real”?

Excuse me, Trevor, sneaking “man-made” into the sentence doesn’t make it true. The earth is warming, and man probably plays some part, but the earth was warming before factories and cars were even built.

The Washington Post ran the headline, “Irma and Harvey should kill any doubt that climate change is real.” But that’s absurd.

Of course climate change is real. Climate CHANGES. Always has, always will. For the past 300 years, since what’s called the “little ice age,” the globe has warmed about 3 degrees.

We humans are just not that important. Even if the Paris accord were honored by everyone, (it wouldn’t be) its PROPONENTS admit it would only have slowed warming by maybe… 2 degrees… over a century.

It does us no good to scream “man-made” every time there’s a terrible hurricane.

I wanted to UPDATE this post (the above video and description) a couple ways, with the most recent storm examined in light of history, as well as an older post making similar points.

Hurricane Florence hit as a Category 1… even though we were told this was going to be a Cat 4 or 5 disaster! REAL CLIMATE SCIENCE mentions the “missed by that much” by saying,

Let’s play a game… North Carolina REALLY WAS hit by a category 4 hurricane in 1954:

Hurricane Florence could inflict the hardest hurricane punch North Carolina has seen in more than 60 years, with rain and wind of more than 130 mph (209 kph). North Carolina has been hit by only one other Category 4 storm since reliable record keeping began in the 1850s. That was Hurricane Hazel in 1954.

Hazel’s winds were clocked at 150 mph (240 kph) at the North Carolina coast and kept roaring inland. They were only slightly diminished by the time the storm reached Raleigh, 150 miles (240 kilometers) inland. Nineteen people died in North Carolina. The storm destroyed an estimated 15,000 buildings.

So what is the deal? We are told hurricanes and tornadoes increasing are a result of climate change. As the earth gets warmer, the weather get’s worse. Right? that is the line… EXCEPT, the weather is getting better? Does that mean then, following the logic of climate alarmists, warming is good?

POWERLINE joined the historical fun yesterday with the following:

As has already been noted here in the latest Green Weenie Award, the climatistas are all spun up to say that Hurricane Florence proves that catastrophic climate change is upon us and that we need to hand over our car keys to Al Gore right now. If you pay attention to extreme weather trends, you’ll know that the period between Hurricane Katrina in 2005 and last year saw no hurricanes making landfall on the continental U.S. (Sandy was a tropical storm by the time it made landfall in 2012), but that hiatus didn’t mean anything. Weather only means something when it fits the narrative. 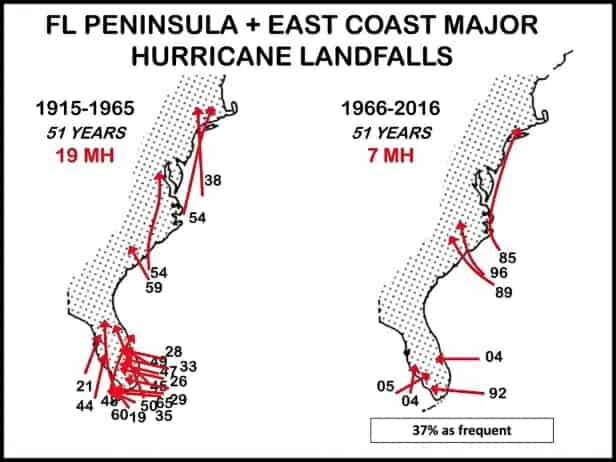 Tucker Carlson has DR. SPENCER on to discuss the politics involved in hurricanes (the experiment by Bill Nye “the science guy” being shown false can be found here at WATTS UP WITH THAT):

With THAT UPDATE, here is a portion of an older post on the subject:

…weather, especially tornadoes and hurricanes have lessened over the years. In other words, if Michael Grunwald (the author of the Time article) says weird weather is a indicator, an evidence for, that warming weather is something we should be fearful of and act on, what is normalizing weather and no warming suppose to indicate… OTHER THAN the whole premise of the article in a major magazine is undermined.

But keep in mind, our total Co2 (carbon) emissions is no laughing matter:

Even the IPCC and British Meteorological Office now recognize that average global temperatures haven’t budged in almost 17 years. Little evidence suggests that sea level rise, storms, droughts, polar ice and temperatures or other weather and climate events and trends display any statistically significant difference from what Earth and mankind have experienced over the last 100-plus years…

~Via, John Kerry vs. the World (as in earth)

Besides the Global Warming crowd blaming everything on it (even the violence in the “arab spring“!), its failed predictions about no ice in the north-pole, no more snow in europe, islands drowning, polar bear numbers, and the like… Al Gore’s claims about Hurricanes is [again], laughable, to wit: when you even lose Jeraldo Rivera, your leftist stance may be very laughable: 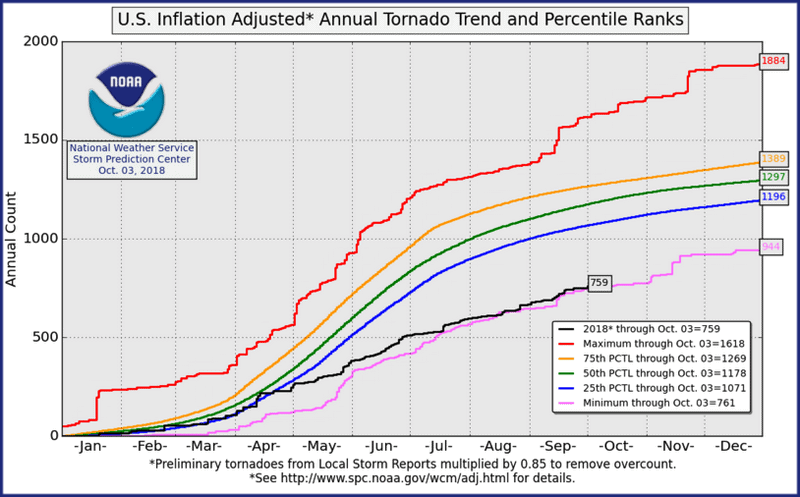 As of October 3, the cumulative total for 2018 is 759; the previous lowest number of tornadoes for this date was 761. The SPC has records extending back 65 years.

Eight tornadoes hit the United States last month, tying the record for the fewest tornadoes in March, according to preliminary data from the Storm Prediction Center.

The last time there were so few tornadoes in March was in 1969, said Greg Carbin, a meteorologist with the prediction center in Norman, Okla. Accurate tornado records began in 1950.

A typical March sees about 80 twisters in the United States, the National Climatic Data Center said.

The only notable outbreak of tornadoes this March was last week, when several twisters formed in Oklahoma and Arkansas, killing one person in Tulsa. That’s the only tornado death this year.

Overall, it’s been a rather quiet year so far for tornadoes, with just 30 hitting the United States. Again, 1969 is the only year that was calmer, when 16 twisters were reported in January, February and March, Carbin said….. 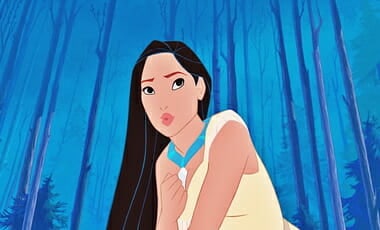 Very rarely to I laud this guy. (Hat-Tip to DAILY WIRE) But he is in a slim minority of Leftists that have [even if VERY late] spoken the truth about Pocahontas. LIKE when he says Trump is racist. He doesn’t have any proof of this, like I clearly show of Obama. 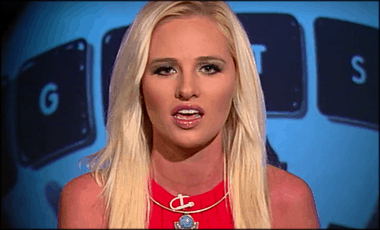 (THE BLAZE) On this episode of The Glenn Beck Radio Program, Glenn, Pat and Stu talk about Tomi Lahren’s guest appearance on The Daily Show, with Trevor Noah. GQ stirs the pot saying, “Trevor Noah went to war with Tomi Lahren, the queen of the Alt Right,” Glenn informs the others. The discussion covers how Tomi handled herself while sharing the stage with Trevor and the turn the conversation had on air.