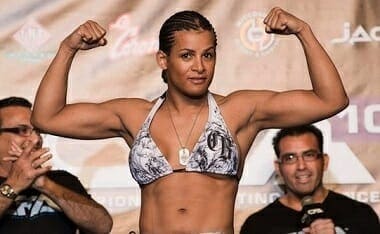 This is with thanks to Moonbattery:

Current liberal dogma that gender is fluid and mutable rather than innate in every cell in our bodies has been very liberating for some. For example, it has freed Fallon Fox to become a highly effective MMA fighter. All he had to do was subject himself to grotesque sexual mutilation and then declare himself to be a woman:

Fox defeated Tamikka Brents by TKO at 2:17 of the first round of their match. In addition to the damaged orbital bone that required seven staples, Brents received a concussion. In a post-fight interview this week, she told Whoa TV that “I’ve never felt so overpowered ever in my life.”

“I’ve fought a lot of women and have never felt the strength that I felt in a fight as I did that night.”

That’s because men are stronger than women, regardless of what ideology is in fashion.

Fox’s gender controversy is not new. In March 2013, after a 39-second knockout victory, it was revealed that Fox had not told the MMA community about his sex-change operation, which took place in 2006. That bout was the fifth straight first-round victory for the then-37-year old Fox, including his three amateur bouts, and his second victory as a professional fighter.

A video of the Brents fight taken by a ringside fan shows Fox throwing several powerful knees to the face and torso of Brents at the start of the match, who pulled guard to protect herself. Soon, Brents turned her back to avoid damage, where she took approximately 45 seconds of elbow and fist strikes – many blocked by her hands and arms – before the referee stopped the fight.

If you are twisted enough to feel like doing that to a woman, then maybe a sex change operation is the right move for you.