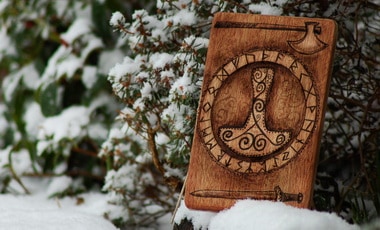 What I find interesting about the article by Rachel S. Mikva (USA TODAY) is her grouping these people with Christianity. For instance, she seems to think that the horned guy mentioning “god” means he is referencing “God” (the Judeo-Christian God). For instance, here is a decent article zeroing in on the neo-Pagan aspects of the white supremacy movement. Of which I know personally about being that I was in jail for almost a year-and-a-half. I know their neo-Pagan systems of belief well. As well as studying the Third Reich love of this Paganism. See for instance:

Here is an excerpt from THE CONVERSATION:

…Then Jacob Chansley, sometimes called the “QAnon Shaman,” took his bullhorn and announced gratitude to God for being able to “send a message to all the tyrants, the communists, and the globalists that this is our nation, not theirs.”Bare-chested to expose his white supremacist tattoos, he had paused briefly to remove his Viking-inspired horned headdress and cap — presumably to assume a properly humble posture as he claimed the United States for himself and his fellow-believers.

One thing that should make it very clear where Angeli’s politics lie are his tattoos. On his torso he has a large Thor’s hammer, known as Mjölnir, and what appears to be an image of the Norse world tree, Yggdrasill.

Mjölnir is one symbol we can be pretty sure was used by the original adherents of the Norse belief system, perhaps to summon the protection of the god Thor. Yggdrasill is the giant ash tree that supports the Norse cosmos, its branches reaching into sky realms inaccessible to humans, and its roots to the subterranean realm of the dead. Unlike Thor’s hammer, it was only rarely depicted by the Vikings, and representations such as the one below are modern interpretations.

Above these tattoos with a central place in Norse mythology is one that is more contentious. It depicts a valknut – an image that appears on two Viking-Age stones from Sweden carved with scenes from Norse mythology, including the Stora Hammars I stone on the island of Gotland.

The symbol’s original meaning is unclear, but it appears in close proximity to the father of the gods, Odin, on the stones. As Odin is closely connected with the gathering of fallen warriors to Valhalla, the valknut may be a symbol of death in battle.

Snorri Sturluson, a medieval Icelandic collector of myths, tells us in his “Language of Poetry” that a famous giant called Hrungnir had a stone heart “pointed with three corners”, and so the valknut is sometimes also called “Hrungnir’s Heart”. Whatever its original meaning, it has been used in more recent times by various neo-pagan groups – and increasingly by some white supremacists as a coded message of their belief in violent struggle…..

Another post with some names of the Norse gods is here. When I was in jail, I met a couple “Odinites”

…Odinism is another term for Asatru, a pagan religion. But in the FBI’s Project Megiddo, it was described as a:

… white supremacist ideology that lends itself to violence and has the potential to inspire its followers to violence in connection to the millennium. What makes Odinists dangerous is the fact that many believe in the necessity of becoming martyrs for their cause. — FBI Report: Project Megiddo

The New Romantics ”A Swedish expert on right-wing extremism says that racist Odinism is the radical religion of the future.” By Mattias Gardell, professor of religious history at the University of Stockholm’s Center for Research in International Migration and Ethnic Relations, writing in the Spring, 2001 edition of Intelligence Report (published by the Southern Poverty Law Center). See also: Clarification, by Mattias Gardell.

What is Asatru?
Long before Christianity came to northern Europe, the people there – our ancestors – had their own religions. One of these was Asatru. It was practiced in the lands that are today Scandinavia, England, Germany, France, the Netherlands, and other countries as well. Asatru is the original, or native, religion for the peoples who lived in these regions. Simply put, you might think of it as ”the religion of the Vikings” since they were its main followers in the years just before our ancestors were forced to adopt Christianity.

What does the word ”Asatru” mean?
It means, roughly, “belief in the Gods” in Old Norse, the language of ancient Scandinavia in which so much of our source material was written. Asatru is the name by which the Norsemen called their religion.

What are the basic tenets or beliefs of Asatru?
We believe in an underlying, all-pervading divine energy or essence which is generally hidden from us, and which is beyond our immediate understanding. We further believe that this spiritual reality is interdependent with us – that we affect it, and it affects us.

We believe that this underlying divinity expresses itself to us in the forms of the Gods and Goddesses. Stories about these deities are like a sort of code, the mysterious ”language” through which the divine reality speaks to us.

We believe in standards of behavior which are consistent with these spiritual truths and harmonious with our deepest being.

How does Asatru differ from other religions?
Asatru is unlike the better-known religions in many ways. Some of these are:

We are polytheistic. That is, we believe in a number of deities, including Goddesses as well as Gods. (We have a tongue-in-cheek saying that a religion without a Goddess is halfway to atheism!)

We do not accept the idea of ”original sin,” the notion that we are tainted from birth and intrinsically bad, as does Christianity. Thus, we do not need ”saving.”

We do not claim to be a universal religion, a faith for all of humankind. In fact, we don’t think such a thing is possible or desirable. The different branches of humanity have different ways of looking at the world, each of which is valid for them. It is only right that they have different religions…..

That quote is part of an article titled, Asatru/Odinism: A Briefing for Law Enforcement Officials. It was written in large part in response to the inclusion of Odinism in the FBI’s Project Megiddo report:

Finally, Odinism is another white supremacist ideology that lends itself to violence and has the potential to inspire its followers to violence in connection to the millennium. What makes Odinists dangerous is the fact that many believe in the necessity of becoming martyrs for their cause. For example, Bob Mathews, the leader of The Order, died in a fiery confrontation with law enforcement. Also, William King relished the fact that he would receive the death penalty for his act of dragging James Byrd, Jr. to his death. Odinism has little to do with Christian Identity but there is one key similarity: Odinism provides dualism — as does Christian Identity — with regard to the universe being made up of worlds of light (white people) and worlds of dark (non-white people). The most fundamental difference between the two ideologies is that Odinists do not believe in Jesus Christ. However, there are enough similarities between the myths and legends of Odinism and the beliefs of Christian Identity to make a smooth transition from Christian Identity to Odinism for those racist individuals whose penchant for violence is not being satisfied. (Source: White Supremacy, Project Megiddo)…..