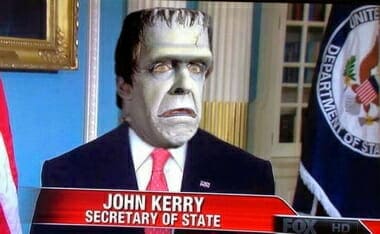 This is from POWERLINE:

As I noted earlier this week, I give Kerry credit for this much. I think that the Kerry Solution represents a truth generally applicable to the Age of Obama. We would all be happier not knowing what is going on. Indeed, many of our fellow citizens live by the Kerry Solution with no effort at all. I wonder how many of the journalists who applauded Kerry (and their colleagues elsewhere) already live by it as well.

When it comes to Kerry himself, we should probably add the Bellow Proviso: “A great deal of intelligence can be invested in ignorance when the need for illusion is deep.” 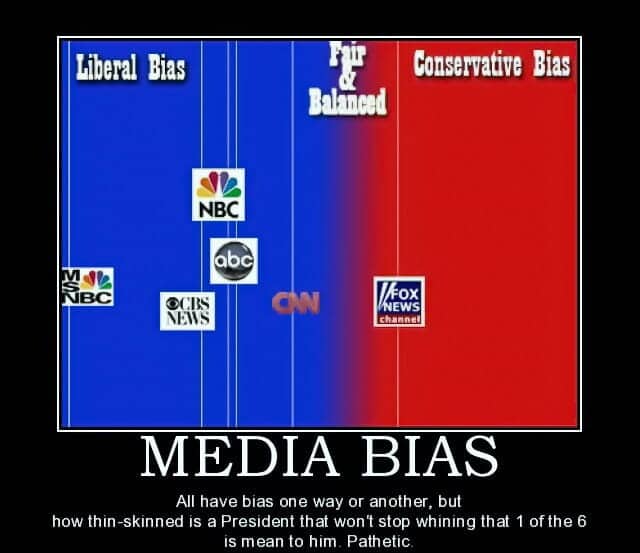 At the 2:37 mark of the above video, there is a distinction made between news versus opinion shows on Fox. When I defend the “fair-and-balanced” aspect of Fox News it is the equal number of left/right guests on shows dealing more with raw news. Here is a Pew Study that makes the same point:

CNN and Fox News Channel, meanwhile, fall much closer to a 50/50 distribution, with Fox News skewing somewhat more heavily toward opinion. Here are the breakdowns 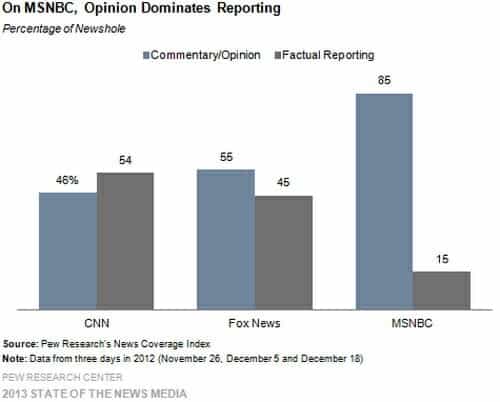 When professor Groseclose and other people rate and discuss the left/right bias… they are looking at the news reporting — NOT shows like Sean Hannity. And this fairness is why more Democrats trust Fox News than other cable networks.

Most Americans perceive partiality in the news media and more believe Fox News is the most trusted for accurate reporting among the major television news organizations, according to a recent poll by the Robert Morris University Polling Institute.

The poll surveyed 1,004 people nationwide with proportional contributions from each state via an online survey held May 6-13. Of those surveyed, 31.8 percent identified themselves as Democrats and 25.7 percent as Republicans.

According to a recent poll, likely voters get their political news primarily from cable television. Among cable channels, 42 percent, a plurality, watch Fox News for its political coverage. Only 12 percent said they watched MSNBC. What’s more, most likely voters don’t like or have never heard of MSNBC’s prime time talent.

The poll, conducted by Politico and George Washington University, used a sample split evenly between political parties – even slightly favoring Democrats in some areas: 41 percent of respondents identified as Republicans, while 42 percent said they were Democrats. Forty-four percent said they usually vote for Republicans, while 46 percent answered Democrats. Forty-eight percent voted for Obama, while only 45 percent voted for McCain.

Even among this group, Fox News is by far the most popular cable outlet. CNN comes in at second, with 30 percent. A sorry MSNBC brings up the rear… 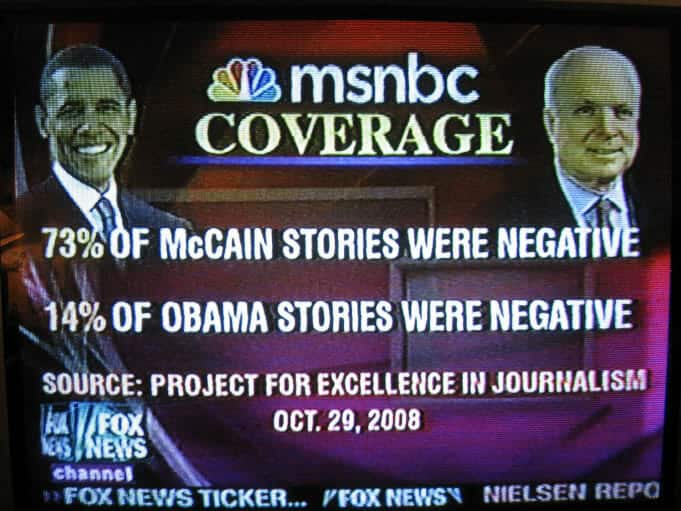 So, Democrats and Independents trust and watch Fox more — or at more of an even split — than they do most other networks (not all) . I only post this here to make a point that I am challenged with often about… so to reference this one post. (The above and below graphics come from some Fox having the best election coverage, HERE.) 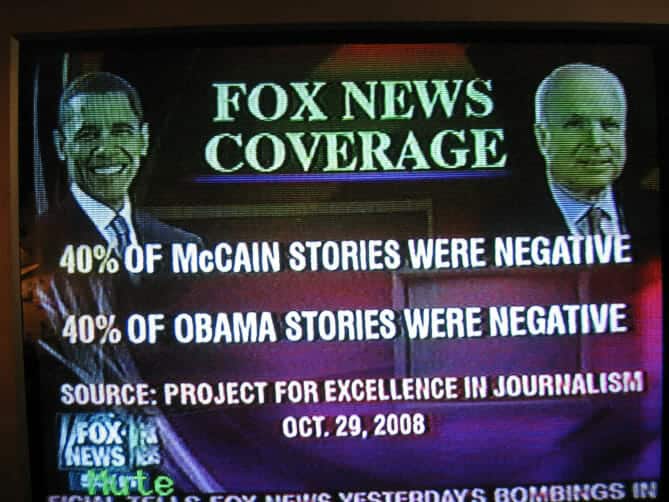 In this video the MSNBC interviewer, Contessa Brewer, pulls some facts from PolitiFact on this Grayson ad. Let’s listen (HotAir h/t): 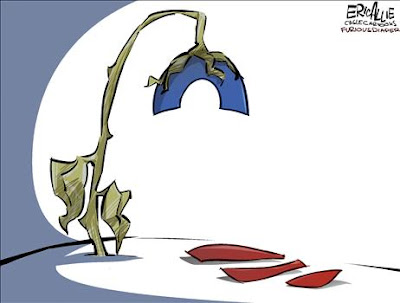 FoxNews continually trounce the competition. But this is just another slap in the face of the lame-stream media:

The ratings are in for Barack Obama’s televised town hall meeting on CNBC Monday, and they’re pretty dismal.

In fact, far more people watched the Fox News Channel’s “Happening Now” with Jon Scott and Jenna Lee airing at the same time than tuned in to see what the President had to say. 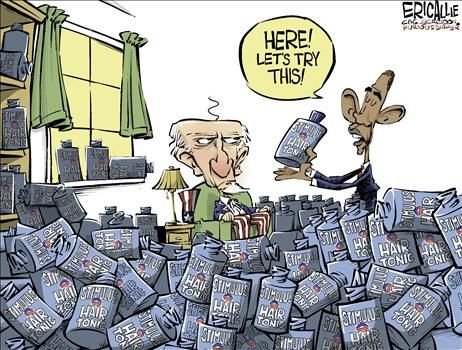 If you notice the last paragraph/stat, even reruns of O’Reilly beat Maddow. Too funny! (Times are in eastern):

WHY the mass appeal of FOXNEWS? Here is one example, the 2008 elections:

Senior executives, on-air personalities, producers, reporters, editors, writers and other self-identifying employees of ABC, CBS and NBC contributed more than $1 million to Democratic candidates and campaign committees in 2008, according to an analysis by The Examiner of data compiled by the Center for Responsive Politics.

The Democratic total of $1,020,816 was given by 1,160 employees of the three major broadcast television networks, with an average contribution of $880.

By contrast, only 193 of the employees contributed to Republican candidates and campaign committees, for a total of $142,863. The average Republican contribution was $744.

The CRP is the organization behind OpenSecrets.org, the web site that for more than a decade has put campaign finance data within reach of anybody with an Internet connection.

I hate to point out the obvious, but if you want to see racism, go to Obama’s old church where Hitler’esque type books are sold in their book store, here is just a couple comparisons from some books sold in Obama’s church’s book store for twenty the twenty years he attended:

The personification of the devil as the symbol of all evil assumes the living shape of the Jew.

The goal of black theology is the destruction of everything white, so that blacks can be liberated from alien gods.

White religionists are not capable of perceiving the blackness of God, because their satanic whiteness is a denial of the very essence of divinity. That is why whites are finding and will continue to find the black experience a disturbing reality.

There is no place in black theology for a colorless God in a society where human beings suffer precisely because of their color. The black theologian must reject any conception of God which stifles black self-determination by picturing God as a God of all peoples.

In contrast to this racist view of God, black theology proclaims God’s blackness. Those who want to know who God is and what God is doing must know who black persons are and what they are doing.

The [Nazi party] should not become a constable of public opinion, but must dominate it. It must not become a servant of the masses, but their master!

It is important to make a further distinction here among black hatred, black racism, and Black Power. Black hatred is the black man’s strong aversion to white society. No black man living in white America can escape it.

It [black liberation theology] is dangerous because the true prophet of the gospel of God must become both “anti-Christian” and “unpatriotic.”…. Because whiteness by its very nature is against blackness, the black prophet is a prophet of national doom. He proclaims the end of the “American Way,”…