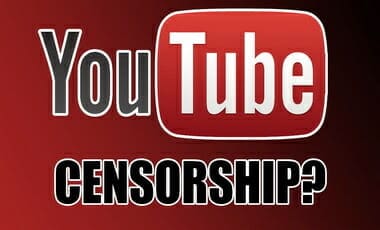 ….The suit heightens a debate over tech companies’ increasing influence on public opinion and how they should police content on their sites. With the internet enabling the spread of misinformation, hate speech and foreign propaganda—especially around the 2016 U.S. election—politicians, academics and the media are increasing scrutiny on the role a handful of tech giants play in modern society.

Since last year, more than three dozen PragerU videos—on subjects including the Korean War and Israel and Palestine—have been restricted by YouTube. As a result, those who use YouTube in “restricted mode,” including students at some universities and children whose parents have put parental control filters in place, are prevented from seeing the videos; all potential ad revenue from the videos is also cut off…..

PragerU, the conservative digital media organization from Dennis Prager, is suing YouTube and its parent Google over alleged censorship of their videos.

According to the Wall Street Journal, the lawsuit, which was filed on Monday, “says YouTube’s more than 30 million visitors a day make the site so elemental to free speech in the digital age that it should be treated as a public forum.”

“The suit argues the site must use the ‘laws governing free speech,’ not its own discretion, to make decisions about what to censor,” they reported, adding that PragerU “alleges that by limiting access to some of its videos without clear criteria YouTube is infringing on PragerU’s First Amendment rights.”

YouTube has repeatedly censored PragerU on their platform, labeling political videos as “restricted” adult content and even removing a video of “a Muslim man describing how he was raised to be anti-Semitic,” branding the video as “hate speech.”….

Here is more from POLITISTICK:

…PragerU isn’t the only company that has been hit by YouTube’s demonetization censorship. Big time YouTube stars like Dave Rubin and Stephen Crowder — and many other (if not all conservatives) have also been affected.

We can attest to experiencing the exact same issue as other conservative YouTube users on our own YouTube channel. Nearly every video we clip, even of the President of the United States speaking, are flagged as “Not Appropriate for All Advertisers,” especially when they make progressive leftist Democrats look bad.

You can appeal the demonetization, but only after the video gets at least 1,000 views will they review the decision with a human reviewer. This adversely effects smaller YouTube users and start-ups

Slaughter of the Sheep has this on the suit:

An article in the Christian Post reveals that Brittany B. Koper, granddaughter of Paul and Jan Crouch, is suing her former attorneys for “breach of duties, inflicting emotional distress and professional negligence.” Apparently the attorneys advised her to help cover up financial abuse and fraud at TBN.

After Koper took charge of TBN’s finance department, she allegedly discovered illegal financial practices on the part of the company’s directors, but was told to protect the information.

“Following her appointment, Ms. Koper was specifically instructed to falsify public financial disclosures, to falsify government records, and to otherwise cover up conduct of the TBN Companies and their directors that Ms. Koper reasonably believed to be unlawful,” the suit claims.

None of this is surprising, but if the allegations are true, it’s going to be hard for a lot of people to turn a deaf ear to someone as close to the family as a grandchild. Many will still defend them and claim this attack is from the devil, …

One News Now has this story on TBN being sued:

The world’s leading Christian broadcasting network is being accused of illegally handing out over $50 million in assets to the network’s directors.

The granddaughter of Paul and Jan Crouch, the founders of Trinity Broadcasting Network (TBN), is making the accusation. According to The Orange County Register, Brittany Koper is suing two lawyers who work with TBN — not her grandparents directly — for negligence and for breaking their “fiduciary duty and other transgressions.” The network’s leaders have often fallen under scrutiny concerning how they are able to afford lavish mansions, a $50-million jet, and private chauffeurs.

Koper has worked for TBN and has served as the director of finance, director of human resources, and chief financial officer for Trinity Christian Center of Santa Ana. She says when she was appointed to TBN’s finance department, she allegedly found that the company had made illegal financial decisions, but she was told to fabricate public disclosures to cover up the tracks. Koper asserts that the two attorneys named in the suit encouraged her to do as she was told.

When she reported the situation, Koper and her husband were fired and accused of being “just as guilty” as the TBN leaders.

Douglass S. Davert is a Long Beach attorney named in the suit. He tells The OC Register that Koper’s allegations are “outright fiction and wholly without merit.” His legal group reportedly filed a lawsuit last year alleging that Koper and her husband were the ones who were engaged in the questionable conduct. Davert’s lawsuit accused the two of fabricating documents and misusing roughly $400,000. That case was dismissed earlier this year.

Koper’s attorney argues that she was fired for inside whistleblowing, so she is preparing to present documents that back her allegations. Meanwhile, Davert asserts that he and the other named attorney will “defend themselves vigorously” when the allegations are made public.

Koper will submit the documents to the Internal Revenue Service for further investigation.

And this from Religion News Blog:

The granddaughter of Trinity Broadcasting Network’s Paul and Jan Crouch has accused the world’s largest Christian broadcaster of unlawfully distributing charitable assets worth more than $50 million to the company’s directors.

The charges are leveled in a federal lawsuit filed by Crouch granddaughter Brittany Koper last week against her former lawyers, who also do legal work for TBN.

“Observers have often wondered how the Crouches can afford multiple mansions on both coasts, a $50 million jet and chauffeurs,” said Tymothy MacLeod, Koper’s attorney. “And finally, with the CFO coming forward, we have answers to those questions.”

Koper had served as chief financial officer, director of finance, corporate treasurer and director of human resources for Trinity Christian Center of Santa Ana, which does business as Trinity Broadcasting Network (TBN), according to the suit.

Koper’s complaint is not directed against her grandparents or TBN — but against the two attorneys who handle some of TBN’s legal work, and who once worked for Koper herself. She accuses them of professional negligence, breach of fiduciary duty and other transgressions in the suit.

Koper was using these attorneys for her personal affairs, and she went to them with her suspicions over the legality of the payments to TBN’s directors, only to be told to shut up, return everything she had earned through TBN to the company, and be gone, according to the suit. […more…]

Koper’s complaint is for

In her complaint Koper also accuses attorney Douglass S. Davert of Davert & Loe in Long Beach, California of lewd behavior toward her. The complaint says he ‘touched her in an overtly sexual manner repeatedly, told Ms. Koper that he was sexually aroused, made lewd and derogatory comments about engaging in sexual acts with Ms. Koper, and offered illegal drugs to Ms. Koper.

In 2009, Koper’s attorney Tymothy McLeod represented Brian Dugger, a gay broadcast engineer who sued the Trinity Broadcasting Network in 2009, claiming he was harassed and discriminated against by TBN employees as well as Paul Crouch Jr. A confidential settlement in the case was reached in 2010.

Some of the players rights offended are spoken of over at Wide Rights:

…The case, if you have not heard about it yet, arises from an incident at the 2008 Gay Softball World Series. At the tournament, D2, a team in the A Division (the highest division you of NAGAAA), was challenged for having too many non-gay players.

The interrogation process was the most offensive part of the story. Three players from D2 were brought into a room individually and questioned in front of 25 random people about their sexual histories, whether they were predominantly attracted to men or women, etc.

(You can read a thorough description of the facts of the case in the plaintiff’s complaint, available here, starting on page 7.)

(Although the judge ruled to allow NAGAAA to keep its policy to limit the number of “non-gays,” the case is proceeding to determine if the players have any remedy for the intrusion and subsequent emotional damage from the interrogation.)…

I will agree with Eric, “only in America!” ~ Libertarian Republican:

A gay softball league is being sued for discrimination for disallowing men who weren’t gay enough from participating. According to the Seattle Times, one of the teams attempted to gain a competitive advantage by sneaking in more not gay enough men than are allowed by the rules. In addition to two declared non-gay men, the team fielded three men who claimed to be bisexual, which, according to officials of the organization, is not gay enough.

But, as to whether there even is such a thing as not being gay enough, the sponsoring organization say, on its website, “Created in 1977, the North American Gay Amateur Athletic Alliance (NAGAAA) is a 501c(3) organization that promotes amateur sports competition, particularly softball, for all persons regardless of age, sexual orientation or preference, with special emphasis on the participation of members of the gay, lesbian, bisexual and transgender (GLBT) community.” So, it would seem that “sexual orientation or preference” shouldn’t count at all.

The three men who are suing the league are being represented by the National Center for Lesbian Rights. So, the lesbians are hooking up with the bi’s to go after the gays. Only in America!