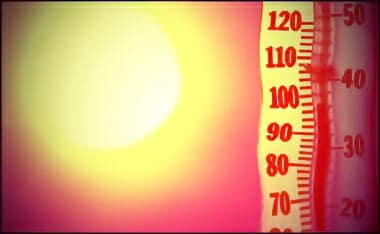 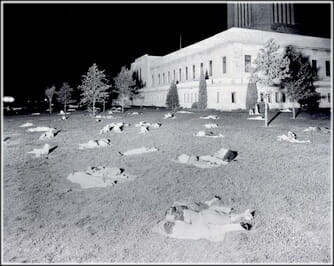 Residents of Lincoln, Nebraska spend the night on the lawn of the state capital on July 25, 1936. The temperature that night never fell below 91°, perhaps the warmest night ever recorded anywhere in the United States outside of the desert Southwest.

NOAA has found it necessary to monkey with July temperatures by 1,000% in order to note that 2016 is the hottest July on record. (Ditto)

In 1924 the outback Australian town of Marble Bar recorded the longest ever heatwave, setting a record for the most consecutive days above 100F (37.8C). In 1976 the United Kingdom sweltered in temperatures exceeding 90F (32.2C) for 15 consecutive days. A further five days saw temperatures reaching 95F (35C). Parts of the country’s southwest went for 45 days without rain, prompting terrible heath and forest fires that destroyed trees and crops. The heatwave came to a dramatic end in August, with severe thunderstorms rolling across the country.

You can see more on my post about the 1930’s being the hottest, globally.

Climate experts say that July 2016 was the hottest month ever.  In the United States, it was one of the least hot months ever.

More accurate measurements of the lower troposphere show that July was nowhere near as warm as 1998 and 2010.

This is why REAL SCIENCE notes that for Gavin A. Schmidt (of NASA) to say July is the hottest month on record is this most PROVABLY fraudulent statement yet.

The touting of all these “hottest years” and scare tactics and the U.N. saying rising oceans will threaten the Statue of Liberty, are all power grabs. Period. The EPA says their most strict legislative acts to implement new regulations that will fight global warming, are ALSO A LIE! Like the Arctic for years being prophesied to be ice-free, and in fact setting ice-expansion records during month it was suppose to be ice-free.

McCarthy admitted as much after being questioned by West Virginia Republican Rep. David McKinley, who pressed the EPA chief on why the Obama administration was moving forward with economically-damaging regulations that do nothing for the environment.

“I don’t understand,” McKinley said in a Tuesday hearing. “If it doesn’t have an impact on climate change around the world, why are we subjecting our hard working taxpayers and men and women in the coal fields to something that has no benefit?”… 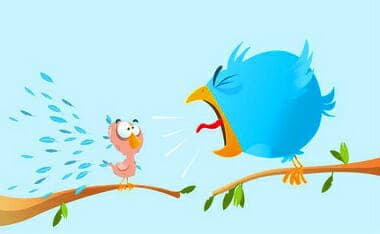