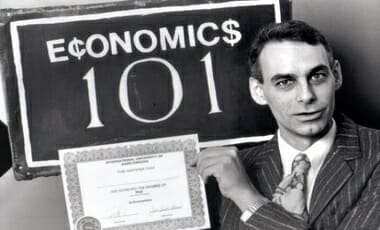 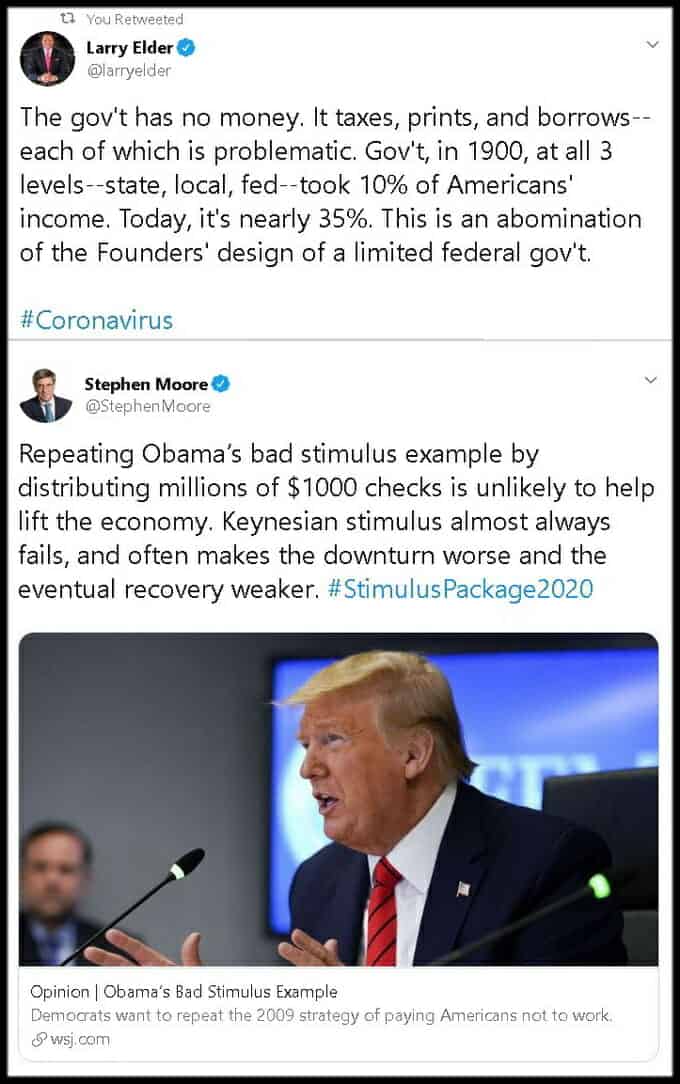 I grabbed this from my phone, because it is behind a WALL STREET JOURNAL paywall otherwise (for whatever reason my phone got the text?). Enjoy Art Laffer and Stephen Moore:

President Trump is negotiating with Congress over a massive stimulus plan to combat the severe economic and financial fallout from the coronavirus. One idea that seems to be catching on is a check of up to $1,200 to be mailed to every American, while Democrats in Congress want paid-leave policies and expanded welfare benefits. These may provide some needed temporary relief for families but are unlikely to help lift the economy. Keynesian stimulus almost always fails, and often makes the downturn worse and the eventual recovery weaker.

Mr. Trump would be wise to learn the lessons from Barack Obama’s $830 billion American Recovery and Reinvestment Act of 2009. In the wake of the housing meltdown and financial crisis, Congress passed the largest stimulus-spending package in American history. The economic spark and job creation were supposed to appear almost immediately, as money flowed into “shovel ready” construction projects. Vice President Joe Biden barnstormed around the country in 2010 promising a “Summer of Recovery” that never came.

One problem apparent from the start was that only about 15% of the money was used for roads, bridges and other infrastructure projects. More than twice as much went to income-redistribution programs such as Medicaid, food stamps and extended unemployment insurance, or to green-energy projects. Remember the federally subsidized “cash for clunkers” auto trade-in program? That sop to the auto industry did little to shore up employment—or even the auto industry. University of Chicago economist Casey Mulligan calls the postcrisis downturn the “redistribution recession.”

The left is now trumpeting the redistributive stimulus as a wondrous success. Mr. Obama even tweeted earlier this year that his stimulus plan laid the groundwork for “more than a decade of economic growth.” But the facts point in the opposite direction. When his stimulus plan passed, Mr. Obama’s economic team predicted above 4% growth each year from 2011 through 2013.

Fortune tellers with tarot cards and Ouija boards might have gotten closer to the mark. On average, growth from 2009 to 2012 was a mere 2%. Two years after the stimulus the unemployment rate was still 9%, and it would have been much higher if not for the millions of Americans who dropped out of the labor force because jobs were so scarce. The plan was designed to help the middle class, but median household income fell through 2011.

In 2015 the Joint Economic Committee of Congress compared the Obama recovery with the previous eight recessions and found that per capita income growth after 2009 was thousands of dollars below the average. The JEC’s conclusion summarizes the legacy of the Obama stimulus: “On economic growth the Obama recovery ranks dead last.”

To paint a rosy picture, Democrats have had to argue that the economy would have been even worse, bordering on a second Great Depression, without all of the spending. Yet their outlook before passing the stimulus exposes that argument as a mere shifting of goal posts. Actual job growth after 2009 was lower than what Mr. Obama’s economic team predicted it would have been without the hundreds of billions in spending. That’s some “investment.”

Then as now, Nancy Pelosi was speaker of the House. Her strategy was, as Mr. Obama’s chief of staff put it, not to let a crisis “go to waste.” The 2009 stimulus morphed into a giant welfare bill—by design. Mrs. Pelosi said back then that spending money on food stamps and unemployment insurance was “fast acting” and “fiscally possible,” and that these programs could deliver a surplus of economic activity for every dollar spent. Magically, paying people not to work was supposed to get more people to work.

Now she is peddling the same economic non sequiturs, hoping to salvage employment while passing two weeks of paid leave for employers with fewer than 500 workers, beefed-up unemployment insurance, and other redistribution programs at a price tag of hundreds of billions of dollars. Democrats even tried to make the paid-leave provision permanent. All this spending will decrease the number of Americans who return quickly to work after the crisis.

Given the current public-health strategy of social distancing, providing cash and in-kind benefits to tens of millions of stranded workers may be a prudent and compassionate approach. But no one should pretend these programs will stimulate recovery. They are likelier to prolong a slump, as the Obama strategy did. President Trump should beware: Another redistribution recession might even ensure that Joe Biden takes his job in November.

A much simpler and more effective stimulus would be a pro-growth tax cut, such as a suspension of the payroll tax. In addition to boosting take-home pay, it would give 27 million small businesses an incentive to hire rather than fire.

Mr. Laffer is chairman of Laffer Associates. Mr. Moore is a senior fellow at the Heritage Foundation. They are authors of “Trumponomics: Inside the America First Plan to Revive Our Economy.”

Art Laffer*talks about the differences in past recoveries and how the gridlock in the current administration comes from a party that demands even Clinton Democrats walk back previously stated positions. Laffer also points out that comparing Bush’s last two [failed] years as President to Obama’s first three [failed] years as President is no comparison to hold in high regard. Great interview.

*… is an American economist who first gained prominence during the Reagan administration as a member of Reagan’s Economic Policy Advisory Board (1981–89). Laffer is best known for the Laffer curve, an illustration of the theory that there exists some tax rate between 0% and 100% that will result in maximum tax revenue for governments. He is the author and co-author of many books and newspaper articles, including Supply Side Economics: Financial Decision-Making for the 80s.