This will be a longer post dealing with Common, the rapper. It is a redux of Larry Elder discussing Common being invited to the White House in May of 2011, and he [Common] was also a long-time member at Reverend Wrights racist church… so I will have a reminder of that church and whom it affiliated closely with.

FIRST, however, the reason for this transfer from my Vimeo account to my YouTube about Common. I was reminded of this because Starbucks has included Common in its anti-racism curriculum at Starbucks. FORTUNE has a short video worth watching about the training.

(ORIGINAL DESCRIPTION) Larry tackles race, violence, and the black community. Rapper “Common” has some very leery lyrics, so Larry attacks em head-on as only the Sage can.

(ORIGINAL DESCRIPTION) Larry Elder adeptly deals with the Democratic double standard regarding who they lauds and who they condemn.

Common supports deeply a racist cop-killer that fled to Cuba. If you are not familiar with her, here are a few links to stories recapping her and commons support for her.

Don’t forget about Angela Davis either…

Dennis Prager goes through an excellent Wall Street Journal opinion piece (http://tinyurl.com/h4n4vlv) detailing the people in attendance to honor Angela Davis at Brooklyn’s Elizabeth A. Sackler Center for Feminist Art, Museum. It sickens me that the left accepts radical murderers but at the slightest blip on a conservative “radar screen, fingers start pointing. Dennis Prager is right, you can never be “too left.”

I used a bit of Fox’s story, the whole video is excellent and a must see:

BUT REMEMBER, Common went to the same church as our President. Here is a recent upload to my FACEBOOK PAGE (for this site) that I will reproduce here:

This is based on a conversation I had during Bush’s presidency… I merely updated the analogy with Trump for an example for today’s youth. To date (through hundreds of conversations on the matter) no one has shown me an example of Trump’s racism like I show of Obama’s ties. Not guilt by association, but guilt by proxy. 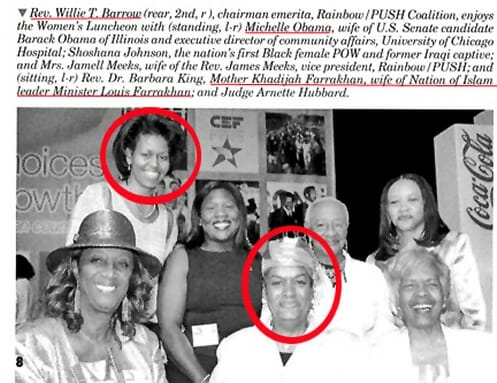 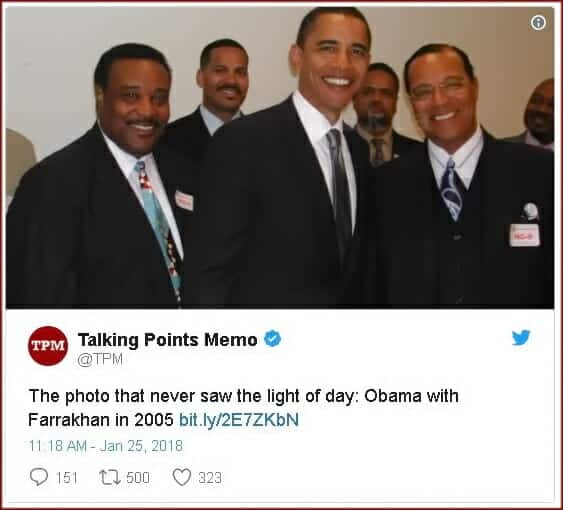 Here is a sampling from one book sold in the book store during Obama’s tenure there (from James Cone, A Black Theology of Liberation):

“The goal of black theology is the destruction of everything white, so that blacks can be liberated from alien gods” (p.62)

“White religionists are not capable of perceiving the blackness of God, because their satanic whiteness is a denial of the very essence of divinity. That is why whites are finding and will continue to find the black experience a disturbing reality” (p.64)

In contrast to this racist view of God, black theology proclaims God’s blackness. Those who want to know who God is and what God is doing must know who black persons are and what they are doing. ” (p.65)

Here is a comparison just in case you are missing the point:

…According to the woman, Baristas were given a 68-page guide where they were asked to respond to writing prompts with various scenarios.

“It felt like we were off task the entire time because we didn’t reflect on the situation itself,” the woman said, referring to the incident involving Robinson and Nelson. “The training materials focused a lot on police brutality, which had nothing to do with the incident that happened.”

Another attendee, a 27-year-old Latino man, pseudonym Jamie, said the executives leading the session came close to talking about the incident only when attendees asked about it.

For some participants, the most upsetting aspect of the training was the focus on police brutality. Here’s what the Philadelphia Magazine reported:

“The videos of cops knocking people down and fighting people were really disturbing,” Tina explained. “I told them I didn’t like the video and they told me they understood and that I was open to give my opinion.” What does watching videos about police brutality have to do with the situation that happened, Tina said she kept asking herself. “They went too deep into it and missed the point all at the same time.”

On top of it, employees of color felt uncomfortable by the videos they were forced to watch.

“By the end of it I was very exhausted. These are conversations I don’t ever have at work,” Jaime Prater, a biracial shift supervisor at a Starbucks in Rancho Cucamonga, Calif. told the Wall Street Journal. “I don’t think Starbucks realized how uncomfortable it would be for people of color to have to watch these videos and talk about this. But sometimes we need to be uncomfortable.”…