I wanted to post some responses what has been becoming a popular argument. For instance I came across this graphic on a friends Facebook: 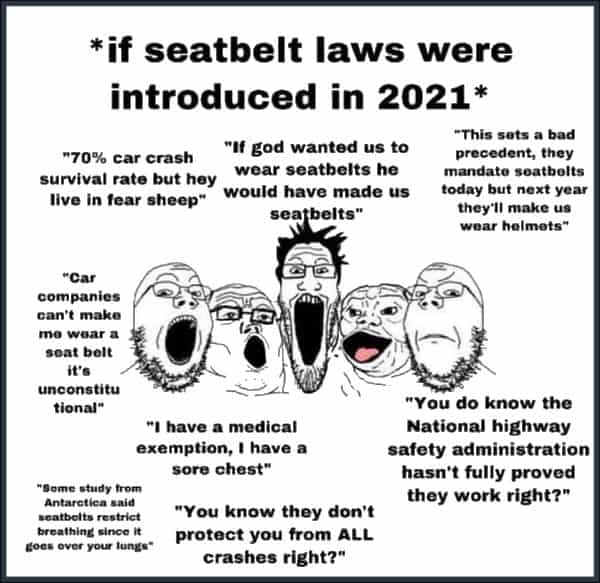 It came up with a family member’s conversations as well. So I wanted to make accessible some responses.

The first example in this section comes from ECONLOG’S Bryan Caplan (Professor of Economics at George Mason University):

….The obvious place to start is: Almost no one thought that wearing masks was a good thing before Covid-19.  Yet contagious respiratory diseases that kill have been around longer than humans.  So if the “In exchange for slight inconvenience and discomfort, we save lives,” argument were airtight, we should have been wearing masks all along – and should plan on doing so forever.  Which seems crazy.

You could reply, “That’s a straw man.  The real argument is that masks pass a cost-benefit test.”  If so, that leaves anti-maskers with two obvious margins to think about.

1. The degree of effectiveness.  The most popular version of this objection is that masks don’t save lives.  But once you start doing cost-benefit analysis, it is sufficient to claim that masks don’t save enough lives.  The evidence from Randomized Controlled Trials (RCTs) is surprisingly supportive of this position.  (And if you deem the RCTs subpar, please join me in calling for large-scale Voluntary Human Experimentation to settle the question once and for all).  Ultimately, however, I still suspect that masks reduce contagion by 10-15%.

2. The degree of inconvenience and discomfort. Many people plainly don’t much mind wearing a mask.  But despite Social Desirability Bias against convenience and comfort, plenty of others plainly do mind.

3. The degree of dehumanization. Personally, I only find masks marginally uncomfortable.  But I hate wearing them, and I dislike being around people who wear them.  Why?  Because a big part of being human is showing other people our faces – and seeing their faces in return.  Smiling at a stranger.  Seeing your child laugh.  Pretending to be angry.  Seeing another person’s puzzlement.  Masks take most of those experiences away.  At the same time, they moderately reduce audibility.  Which further dehumanizes us.  How many times during Covid have you struggled to understand another person?  To be heard?  Indeed, how many times have you simply abandoned a conversation because of masks?  I say the dehumanization is at least five times as bad as the mere discomfort.  And if you reply, “Want to see other people’s faces and hear other people’s voices?  Just Zoom!,”  I will shake my head in sorrow that you’re dehumanized enough to say such a thing.

What if the choice was between masks and a 50% annual chance of death?  The reasonable reaction would probably be, “Fine, we’ll be severely dehumanized, but we’ll survive.  Just like war.  I guess I’ll take it until a better deal comes along.”  When the choice is between masks and a 0.5% annual chance of death, however, the reasonable reaction is rather, “I’ll take my chances and live like a human being.”  Indeed, once you’re old enough, even a 50% annual chance of death starts to look like a good deal.  My considered judgment: If another Covid strikes when I’m 80, I do not want my grandchildren to wear masks around me.  I want to enjoy their laughter while I still can…..

The masks are dehumanizing, seatbelts are not. The argument against women being forced to wear burkas in many counties in the Middle-East is that they dehumanizes them.

One of the main points is that almost every study shows a very slight improvement at best. Here, for instance is a CDC study showing how ineffective they are — much more-so than seatbelts.

In our systematic review, we identified 10 RCTs that reported estimates of the effectiveness of face masks in reducing laboratory-confirmed influenza virus infections in the community from literature published during 1946–July 27, 2018. In pooled analysis, we found no significant reduction in influenza transmission with the use of face masks (RR 0.78, 95% CI 0.51–1.20; I2 = 30%, p = 0.25) (Figure 2). …. None of the household studies reported a significant reduction in secondary laboratory-confirmed influenza virus infections in the face mask group (11–13,15,17,34,35)….

Disposable medical masks (also known as surgical masks) are loose-fitting devices that were designed to be worn by medical personnel to protect accidental contamination of patient wounds, and to protect the wearer against splashes or sprays of bodily fluids (36). There is limited evidence for their effectiveness in preventing influenza virus transmission either when worn by the infected person for source control or when worn by uninfected persons to reduce exposure. Our systematic review found no significant effect of face masks on transmission of laboratory-confirmed influenza….

Hiram Powers, the nineteenth-century neoclassical sculptor, keenly observed, “The eye is the window to the soul, the mouth the door. The intellect, the will, are seen in the eye; the emotions, sensibilities, and affections, in the mouth.” The best available scientific evidence suggests that the American people, credulously trusting their public-health officials, have been blocking the door to the soul without blocking the transmission of the novel coronavirus.

Some posts by American Institute for Economic Research (AIER):

This from NATIONAL REVIEW:

Singer justifies this imposition by comparing the proposal to laws that require people to wear seat belts in cars. From, “Why Vaccination Should be Compulsory:”

We are now hearing demands for the freedom to be unvaccinated against the virus that causes COVID-19. Brady Ellison, a member of the United States Olympic archery team, says his decision not to get vaccinated was “one hundred percent a personal choice,” insisting that “anyone that says otherwise is taking away people’s freedoms.”

The oddity, here, is that laws requiring us to wear seat belts really are quite straightforwardly infringing on freedom, whereas laws requiring people to be vaccinated if they are going to be in places where they could infect other people are restricting one kind of freedom in order to protect the freedom of others to go about their business safely.

Good grief. There is a huge difference between a law that requires wrapping a cloth belt around one’s body while in a moving car and injecting chemicals into one’s system. Yes, both acts involve attempts to promote public safety. But the former’s interference with liberty is de minimus, while the latter is one of the most potentially portentous that can be asked of people.

In free societies, legal mandates must be reasonable. A national vaccination mandate — which would be unprecedented — fails that test.

Why aren’t near-universal mandates “reasonable?” Well, young people almost never become seriously ill from COVID — although a very few certainly do. But there is also some evidence of a very slight — but potentially serious — risk from the vaccines for the young. If we care about freedom, surely, for the young, vaccination may be the preferred — but should not be the mandatory — course.

There is also significant evidence that people who recovered from COVID already have significant natural resistance to the disease. That being so, is it reasonable to force people with antibodies to involuntarily inject substances into their bodies, particularly since there is a very slight potential for serious bodily injury or death from the vaccine? No.

Finally, the people most at risk of serious disease are the unvaccinated. People who choose to go unprotected are risking mostly themselves. Allowing them to face that risk is more reasonable than violating their personal autonomy…..

In an excellent refutation, POOR ROGER’S ALMANNAC (love the name) puts to rest this analogy:

….However, there are a few things wrong with this argument.

To be honest, if an automobile analogy is to be made with respect to face masks, it would be more useful to equate the mask to a Tesla self-driving auto, which (I am told) is supposed to protect not only those within the car, but other motorists within the vicinity as well. Considering Tesla’s “safety record” (I use that term loosely), this comparison might hold up quite well, since face masks also do not perform to the expectation of those who believe in them.

Seat belts do. No comparison.

Oh, by the way, I nearly missed this. Whether we are talking about seat belts or masks does not matter. The State can make all the rules it wants to and try as hard as it can to enforce those rules, but at the end of the day, it cannot prevent auto accidents from happening nor can it prevent someone from getting sick by catching a cold or flu virus. The State certainly cannot prevent a death, regardless of the cause, when the Grim Reaper calls.

God can. Perhaps we should be talking about misplaced faith.