This is really a continuation of a previous post titled, “More Straight Talk About Covid-19 Prophylactics,” coupled with this convo as well: “Trying to Cut Through Bias To Talk Ivermectin (Didn’t Work).” (I will of course add a few comments here-n-there in the [box] parenthesize.)

But the conversation pivoted to studies done on Ivermectin… to the point that I wondered about how the states in India handing out prophylactic’s earlier this year were doing (Hydroxychloroquine and Ivermectin). I now set out to find out “what happened,” and this is where that curiosity led to update the issue on my site — I think it’s that important. I figured for the fans here that this continuing point[s] will be helpful in conversation regarding “prophylactic measures.” 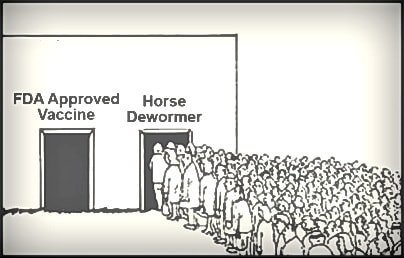 The conversation has taken place over a cartoon I was tagged in on Facebook, here is the graphic to the right. So let us pick up with and MIKE B. point:

[So M.B. is still stuck on Ivermectin being used for horses… still influenced by Rachel Maddow as noted previously.]

I posted this as well – click to enlarge in another window: 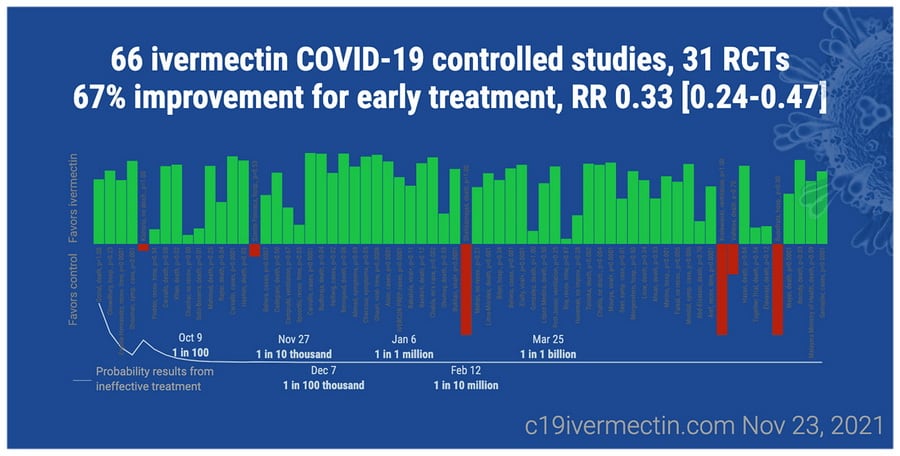 Elimination of COVID-19 is a race against viral evolution. No treatment, vaccine, or intervention is 100% available and effective for all variants. All practical, effective, and safe means should be used, including treatments, as supported by Pfizer [Pfizer, TrialSiteNews]. Denying the efficacy of treatments increases the risk of COVID-19 becoming endemic; and increases mortality, morbidity, and collateral damage 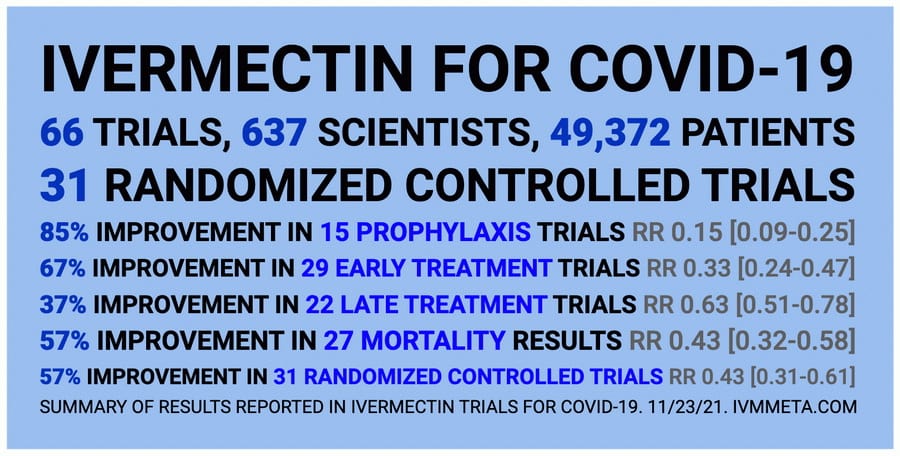 [I want the reader to be aware that the 66 Ivermectin trial groups were human trials… all 130 studies may not be, but those 66 are. If you go to the source and click on EARLY, LATE, or PROPHYLAXIS, the “bovine Study” that is in the “all” category are not in those human categories. So M.B. isn’t just ranmdomly choosing” a study. He is selectively doing what the left does all the time. Obfuscate… which is why I said of M.B. in the previous convo, “Obfuscation is thy moniker.”]

See the switch here? So my “right” that is to follow is commenting mainly on this portion of M.B.’s statement: “these are a load of third world country studies in not name brand medical articles.” This statement jogged my memory of me wanting to see whats-what in India:

Many countries without a preconceived bias and/or large pharmaceutical lobbying power were able to actually give HUMAN patients Ivermectin, wit h great results. This is part of the reason Japan’s head medical dude is again calling for it to be used. It is based on real world use (which many of those studies document.

Another example, since April 28, India medical officials started providing Hydroxychloroquine and ivermectin to its massive population. As India is the major pharmaceutical manufacture in the world, they were ready for this massive drug distribution. Miraculously, COVID cases have plummeted quickly since then thanks to the new rules. 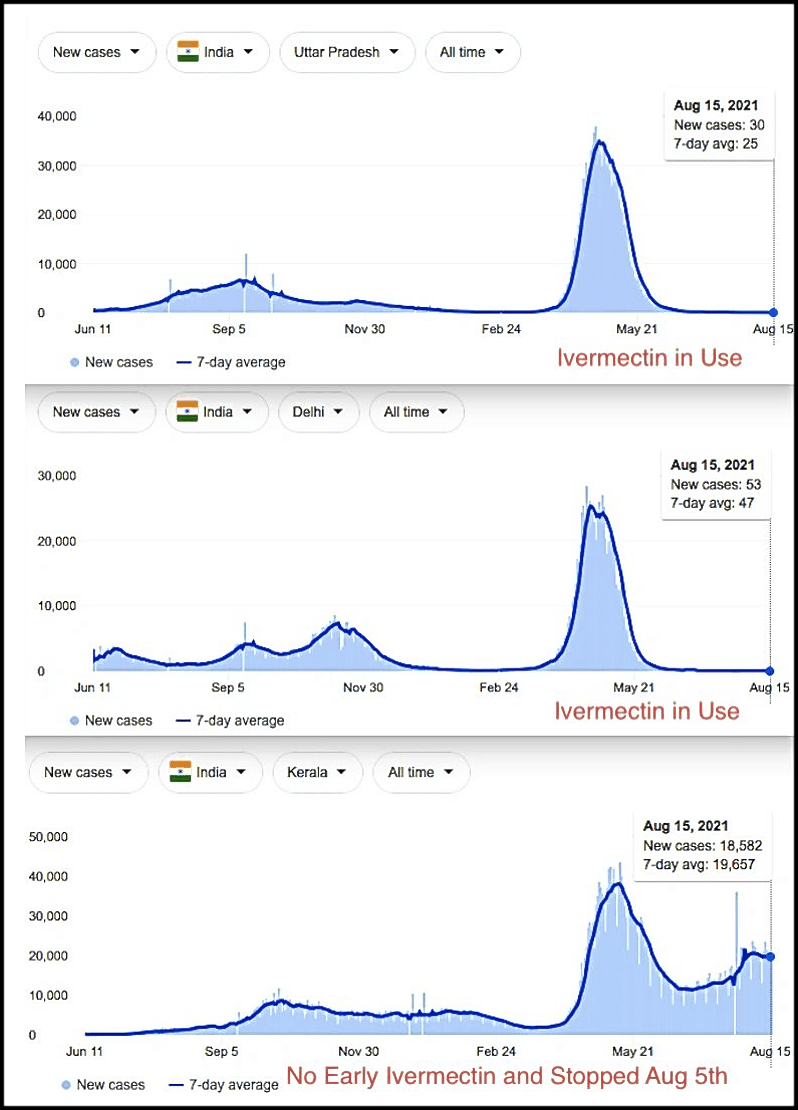 ….The Times of India published this statement on July 29. Kerala has continued to have the majority of new daily cases and almost 25% of India’s daily deaths despite a population of 34 million, less than 3% of India’s total population.

On August 15, Kerala accounted for 18,582 of India’s 32,937 new cases and 102 of India’s 417 new deaths. By contrast, the Ivermectin-using state of Delhi, with nearly the same population size, recorded only 53 new cases and ZERO deaths. In comparison, Uttar Pradesh, with almost eight times as many inhabitants, had only 30 new cases and ONE death.

So what could Kerala be doing wrong?

The use of these prophylactics that have proven safe for humans for decades in Africa, France, and the like.

SIDE-NOTE: when Trump mentioned Hydroxychloroquine (HCQ) as a possible prophylactic — because NO ONE was or still is in America treating the disease early, they only wait to you are sick enough to be admitted to the E.R. — France changed HCQ from an over the counter drug to prescription only.

COORECTION: I had mentioned that AFTER Trump mentioned HCQ France banned it. This is not the case, France banned it a couple months earlier: “President Trump mentioned HCQ as a potential “game changer” on Mar 21. But the war against HCQ was already on. Until Jan 15, 2020, HCQ was available over the counter in France. After that it became available by prescription only, days before the first Western reports on the epidemic, which had been circulating in Wuhan, China, at least since October 2019. This was part of a multinational effort to restrict HCQ.”

Australian MP Craig Kelly noted in July that Uttar Pradesh, with a population of 230 million, “smashed the scary Delta variant” with Ivermectin. 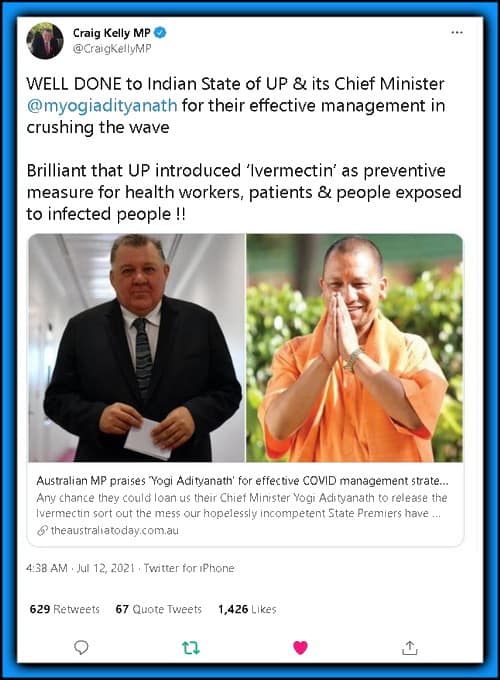 This kept India at 96th in death count. Uttar Pradesh was the first state in India to implement it (INDIAN EXPRESS).

AGAIN, after the Olympics Japan is dealing with record cases, and AGAIN Dr. Ozaki, The chairman of the Tokyo Metropolitan Medical Association, is recommending Japan take his advice on Ivermectin.

My response, and I assume the silence after posting this is because he didn’t realize he was not taking into account “when” Ivermectin/HCQ were introduced. It “sounded good” until more info was introduced. So I worked on grabbing some graphs (better than what the articles provided) and combined them all for affect. You can see that HERE, but below they are separated for ease of viewing. And again, it is similar to what I noted above — finding a “bovine test” and applying that to the whole, or calling Ivermectin a horse “dewormer” as if there is no application of it for humans:

(I did some coloring and connecting of these 4-graphs to make it clear) Kerala reports 188 deaths in last 24 hours. Kerala accounts for 70 percent new Covid cases in the country. 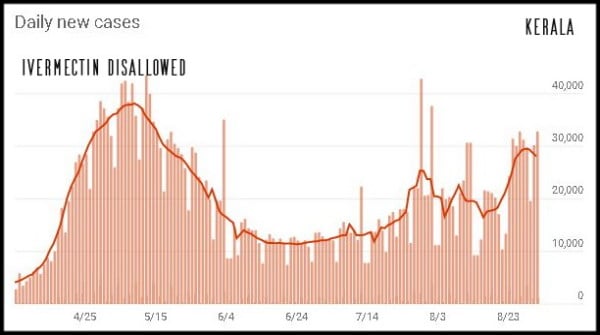 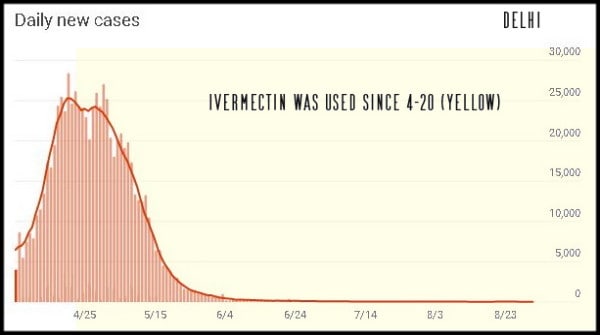 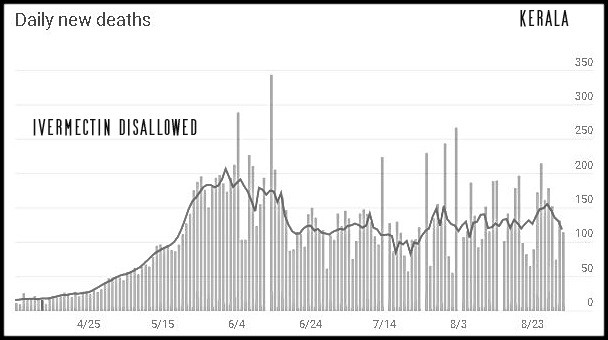 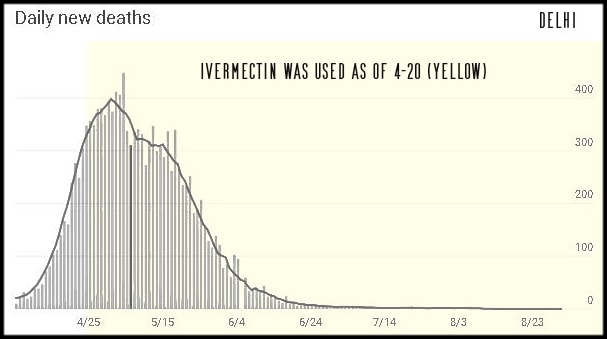 It just so happened that this conversation happened just after some excellent article appeared, one of the best ones is by a favored columnist of mine, Daniel Horowitz. The article is titled, “The Unmistakable Ivermectin Miracle In The Indian State of Uttar Pradesh.” Another “multi-part” set of posts I highly recommend are as follows — BTW, I use Delhi in my example above because M.B. mentioned it, however, the articles deal more with Uttar Pradesh.

So again, the effectiveness of the vaccines have dropped to under 40%, which is lower than Fauci’s “scientists are hoping for a vaccine that is 75 percent effective — but even a 50 or 60 percent success rate would be considered a win.” But we KNOW that HCQ and IVER have a 64% and 84% effective rate. But these not patented, cheap, safe drugs do not have a multi-national corporation[s] behind highly paid lobbyists  to ensure their product is taken. For instance, “fully vaccinated” in Israel use to mean both shots of the mRNA vaccines. Now, to be fully vaccinated means to have three shots [the booster].

Keep in mind this state has an estimated population of 241 million people in 2021 and has the highest population in India.  This is almost two-thirds of the United States population in 2021 and yet it is now a COVID-19 free nation. Here is the story via HINDUSATAN TIMES (hat-tip to GATEWAY PUNDIT):

33 Districts In Uttar Pradesh Are Now Covid-Free: State Govt | Overall, the state has a total of 199 active cases, while the positivity rate came down to less than 0.01 per cent.

There are no active cases of the coronavirus disease (Covid-19) in 33 districts of Uttar Pradesh, the state government informed on Friday. About 67 districts have not reported a single new case of the viral infection in the last 24 hours, the government said, noting the steady improvement of the Covid-19 situation in the state.

Overall, the state has a total of 199 active cases, while the positivity rate came down to less than 0.01 per cent. The recovery rate, meanwhile, has improved to 98.7 per cent. As per the state’s health bulletin, Uttar Pradesh reported only 11 new Covid-19 cases and zero deaths in the last 24 hours. The fresh cases came out of 2.26 lakh samples that were tested in the last 24 hours. As of Friday, the state government has conducted 7.42 crore tests, according to the data published by Uttar Pradesh’s health department.

Back to GATEWAY PUNDIT:

Uttar Pradesh is the leading state in India to use Ivermectin as early and preventatively in all family contacts. And this state is one of the five lowest COVID cases of all states in India despite having only a low vaccination rate of 5.8% fully vaccinated compared to the USA that has 54% fully vaccinated.

Here’s a little background on the use of Ivermectin in UP, The Indian Express reported:

Uttar Pradesh was the first state in the country to introduce large-scale prophylactic and therapeutic use of Ivermectin. In May-June 2020, a team at Agra, led by Dr. Anshul Pareek, administered Ivermectin to all RRT team members in the district on an experimental basis. It was observed that none of them developed Covid-19 despite being in daily contact with patients who had tested positive for the virus,” Uttar Pradesh State Surveillance Officer Vikssendu Agrawal said.

He added that based on the findings from Agra, the state government sanctioned the use of Ivermectin as a prophylactic for all the contacts of Covid patients and later cleared the administration of therapeutic doses for the treatment of such patients.

He said that apart from aggressive contact tracing and surveillance, the lower positivity and fatality rates may be attributed to the large-scale use of Ivermectin use in the state, adding that the drug has recently been introduced in the National Protocol for Covid treatment and management. “Once the second wave subsides, we would conduct our own study as there has been an emerging body of evidence to substantiate our timely use of Ivermectin from the first wave itself,” Vikasendu told The Indian Express.”