So, I debated on whether to add this to our (Chris L. and myself conversation, posted HERE) earlier conversation, but, I decided to post it separately. So, in the same conversation he finally took a jaunt over to my MINIMUM WAGE portion of my ECON 101 page. He still doesn’t know why the minimum wage was used during the Davis/Bacon Act days (a), why the apartheid unions in South Africa used it (b), and why unions here use it and which community it hurts the most (c) — but at least he a c t u a l l y went to my link… and got it all wrong – lol:

…An even more insidious substitution effect of minimum wages can be seen from a few quotations. During South Africa’s apartheid era, racist unions, which would never accept a black member, were the major supporters of minimum wages for blacks. In 1925, the South African Economic and Wage Commission said, “The method would be to fix a minimum rate for an occupation or craft so high that no Native would be likely to be employed.” Gert Beetge, secretary of the racist Building Workers’ Union, complained, “There is no job reservation left in the building industry, and in the circumstances, I support the rate for the job (minimum wage) as the second-best way of protecting our white artisans.” “Equal pay for equal work” became the rallying slogan of the South African white labor movement. These laborers knew that if employers were forced to pay black workers the same wages as white workers, there’d be reduced incentive to hire blacks.

South Africans were not alone in their minimum wage conspiracy against blacks. After a bitter 1909 strike by the Brotherhood of Locomotive Firemen and Enginemen in the U.S., an arbitration board decreed that blacks and whites were to be paid equal wages. Union members expressed their delight, saying, “If this course of action is followed by the company and the incentive for employing the Negro thus removed, the strike will not have been in vain.”

Our nation’s first minimum wage law, the Davis-Bacon Act of 1931, had racist motivation. During its legislative debate, its congressional supporters made such statements as, “That contractor has cheap colored labor that he transports, and he puts them in cabins, and it is labor of that sort that is in competition with white labor throughout the country.” During hearings, American Federation of Labor President William Green complained, “Colored labor is being sought to demoralize wage rates.”

Today’s stated intentions behind the support of minimum wages are nothing like yesteryear’s. However, intentions are irrelevant. In the name of decency, we must examine the effects…. 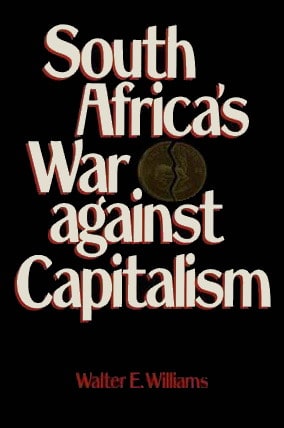 …The white labor unions and other white supremacists lobbied for other regulations which, in effect, prohibited blacks from being hired. These groups demanded that the hiring of blacks and other nonwhites be subject to the same compulsory employer compensation and minimum wage requirements granted to white union members. The intent of such legislation, Williams contends, is obvious. Such labor laws took away the only bar-gaming chip available to the blacks and other non-whites—their willingness to work for a lower wage. Many whites recognized this. In 1925, for example, the report of the Mining Regulations Commission proposed a mandatory system of minimum wages per job “in order to rescue the European miner from the economic fetters which at present render him the easy victim of advancing native competition.”

Contrary to the view accepted by many on the political left, apartheid is not the result of white businessmen attempting to maximize profits by enslaving cheap black labor. It is instead a product of political privilege. Says Williams:

The mere existence of South Africa’s extensive racial regulatory laws is evidence enough that racial privilege is difficult through free market forces. Consider South Africa’s job reservation laws, which mandate that certain jobs be performed by whites only . . . . The presence of job reservation laws suggests that at least some employers would hire blacks in the “white jobs.” The fact that they would hire blacks to do white jobs neither requires nor suggests that these employers be necessarily any less white supremacist than anyone else. It does suggest that those employers who would hire blacks considered such a course of action to be an attractive alternative because blacks were willing to work for lower wages—“uncivilized wages”—than white workers. The business pursuit of profits—which caused employers to be less ardent supporters of the white supremacist doc-trine-has always been the enemy of white privilege. This is why South African white workers resorted to government.

“The whole ugly history of apartheid has been an attack on free markets and the rights of individuals, and a glorification of centralized government power,” Williams concludes. Only when South Africa’s people—black, white, or colored—“de-dare war against centralized government power” will there be genuine progress toward freedom. Walter Williams’ new book provides powerful intellectual ammunition for that war.

This is more than a theoretical point. Historically, lower skill levels did not prevent black males from having labor force participation rates higher than that of white males for every US Census from 1890 through 1930. Since then, the general growth of wage-fixing arrangements: minimum wage laws, labor unions, civil service pay scales, etc. has reversed that and made more and more blacks unemployable despite their rising levels of education and skills: absolutely and relative to whites.

And here’s the “money quote”:

In short, no one is employable or unemployable absolutely, but only relative to a given pay scale.

And that highlights the essence of the economic logic that explains why the most vulnerable workers (low-skilled, uneducated, teenagers, etc.) are the group that is most harmed by minimum wage laws — those laws artificially raise the wages of low-skilled workers without increasing their productivity, and therefore significantly reduce their employability relative to higher-skilled workers.

For example, in the study from the team of researchers at the University of Washington on Seattle’s $15 an hour minimum wage, they reported (emphasis added):

Our preferred estimates suggest that the Seattle Minimum Wage Ordinance caused hours worked by low-skilled workers (i.e., those earning under $19 per hour) to fall by 9.4% during the three quarters when the minimum wage was $13 per hour, resulting in a loss of 3.5 million hours worked per calendar quarter. Alternative estimates show the number of low-wage jobs declined by 6.8%, which represents a loss of more than 5,000 jobs.

The work of least-paid workers might be performed more efficiently by more skilled and experienced workers commanding a substantially higher wage.

However, this is not the reason for this post. I merely wanted to show the hubris out there in stating propaganda (not intentionally, just in ignorance). Here is the portion that that I wanted to highlight and respond to. Here is the video so people can glean context: 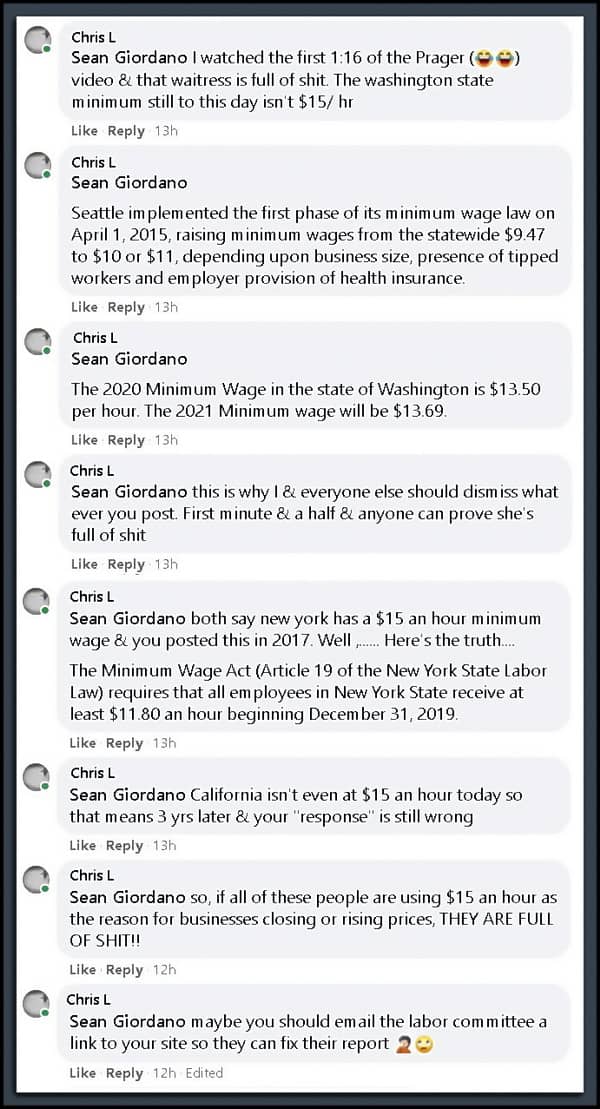 So, here are the main points of the above:

The Prager U video specifically mentions Seattle and New York City. This is key. I used two websites to find the current minimum wage in Seattle, Washington: MINIMUM-WAGE.ORG and SEATTLE GOVERNEMNT’S website. In the conversation I noted this many times, but granted, I wasn’t clear. 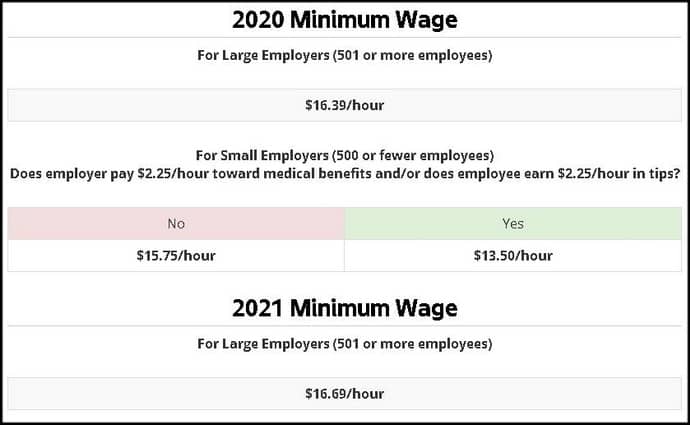 During the long discussion that followed a few paths, what I learned is that franchises are all included together as a large business. So if I were to franchise, say, The Brass Tap (bar/restaurant chain focuses mostly on its craft beer offerings), if the franchises nationwide have 501 employees, the tips earned do not lower the to $13.50. To make the point clearer I made a crude version: 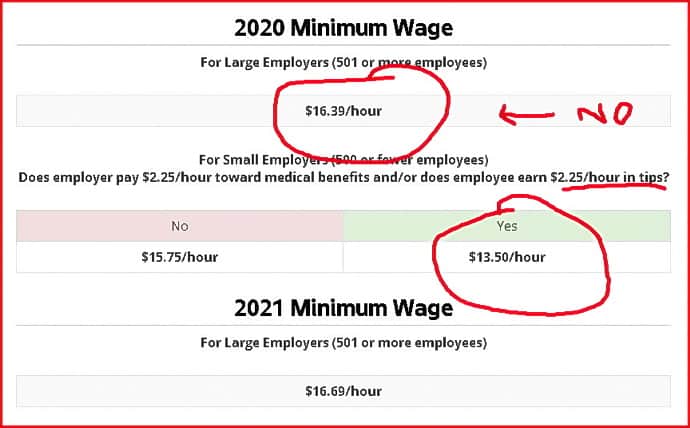 A sad article of sorts was this one detailing the info:

SEATTLE — The U.S. Supreme Court will not hear a challenge to Seattle’s $15-an-hour minimum wage from franchise owners who say the law discriminates against them by treating them as large businesses.

Seattle was one of the first cities in the nation to adopt a law aiming for a $15 minimum wage, giving small businesses employing fewer than 500 people seven years to phase it in. Large employers must do so over three or four years, depending on whether they offer health insurance to their employees.

Five franchises and the International Franchise Association sued the city, saying the law treats Seattle’s 623 franchises like large businesses because they are part of multistate networks. But the franchises say they are small businesses and should have more time to phase in the higher wage.

“Seattle’s ordinance is blatantly discriminatory and affirmatively harms Seattle hard-working franchise small business owners every day since it has gone into effect,” Robert Cresanti said in a statement. “We are simply attempting to level the playing field for the 600 local franchise business owners employing 19,000 people in Seattle.”….

Remember, Seattle has a higher minimum wage than the rest of the state.

I likewise responded to points #4 thus

This comes from the NEW YORK CITY GOVERNMENTS website:

#5 deals with California as a state

However, just like New York state/New York City and Washington state/Seattle, so to goes California. There are many cities in California that have differing minimum wage laws than the state. Here is just one example (click to enlarge):

So, there are a couple numbers not dealt with yet…

If the opposite of Chris L’s premise is in fact shown, and if his position is “true” of me — that is: “why I & everyone else should dismiss what ever you post.” Why should I, or we, not dismiss whatever he says. I mean, he is full of shit (#6!!).

Later in the conversation discussion about the effects of minimum wage hurting restaurants, to which Chris posted the following:

I merely responded with