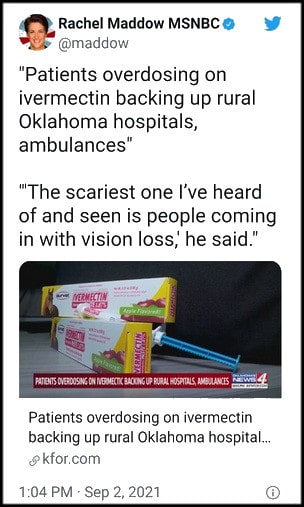 I posted this Rachel “Left of Mao” Maddow Tweet on my Facebook and was soon approached by a naysayer.

And this is similar to another #FAKENEWS story regarding ivermectin from Rolling Stone magazine. A friend noted this article with his comment:

And he followed up that with this:

I will just bluntly state, I don’t buy it. And this is why — not what he requires of me and I do not of him. Not only was the Oklahomah hospital story bunk, but major parts that inform the NPR story are #FAKENEWS as well. So I posted this: 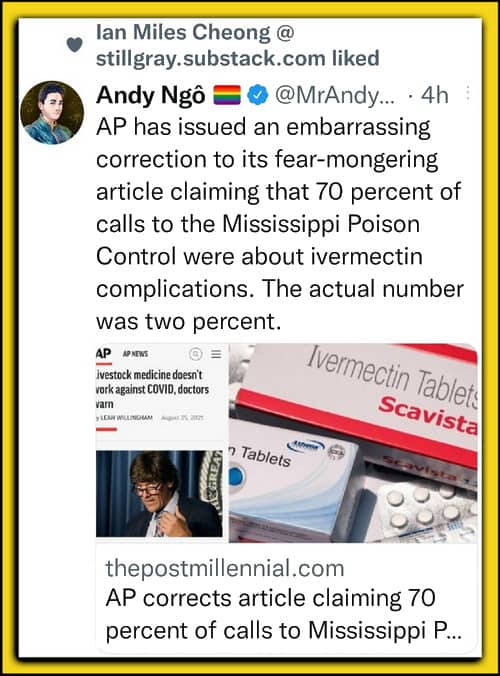 Jim G. then asked for confirmation of the story. So I quoted the NPR story and followed it up with the POST MILLENNIAL story:

It’s been revealed that the Associated Press has issued an embarrassing correction to its fear-mongering article claiming that 70 percent of calls to Mississippi Poison Control were about ivermectin ingestion. The actual number was 2 percent.

In an article published Aug. 23 about patients taking livestock medicine to try to treat the coronavirus, the Associated Press admitted it “erroneously reported” based on information provided by the Mississippi Department of Health that 70 percent of recent calls to the Mississippi Poison Control Center were from residents who had ingested the ivermectin version meant for animals.

The Associated Press updated the story on Aug. 25, entitled “Livestock medicine doesn’t work against COVID, doctors warn,” to correct that the number of calls to poison control about ivermectin was about 2 percent. Incorrect information provided by the Mississippi Department of Health had said the number was 70 percent, the Associated Press noted at the end of the report.

Before the correction, the Associated Press wrote that at least 70 percent of recent calls to the Mississippi Poison Control Center have been related to ingestion of livestock or animal formulations of ivermectin purchased at livestock supply centers, according to the state Department of Health officials. However, the exact number of total calls received were not specified at the time.

Now the current Associated Press report reflects that it was at least 70 percent of the 2 percent of recent poison control calls regarding the anti-parasite medicine.

Another version of the correction issued reiterated that the number of ivermectin-related calls to poison control was about 2 percent. And of those calls, 70 percent were by patients who had ingested the veterinary version of the medicine.

Based on the corrected Associated Press figures, the Daily Wire calculated Monday that a grand total of 1.4 percent of the calls to Mississippi Poison Control were from patients who had ingested the livestock form of ivermectin…..

The entire article is worth a read. But here is some of the responses:

Lol. Oh boy… Archive Today a fake website? No “direct” link? Etc. And I am suppose be swayed from something “Seen on my timeline just now”? Lol.

In the story there are links to this (graphic is linked):

I followed that with this:

Steven M. followed that up with this: “Dear FDA: Are MERCK and Its Partners Treating Children with A Horse Drug?”

And this site linked in the pic: 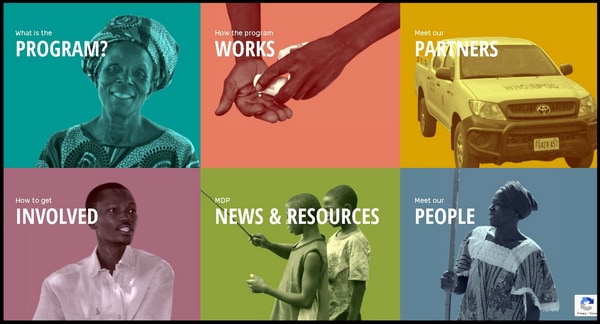 At this point Jim G. tapped out with a switch of subject.