Two articles I want to get onto my site… and the first one about Africa I have used in the past… actually, Tokyo’s Medical Association Chairman (Haruo Ozaki) uses this information in his recommending to Japan to use Ivermectin. Here is my response from a conversation posted a while back: 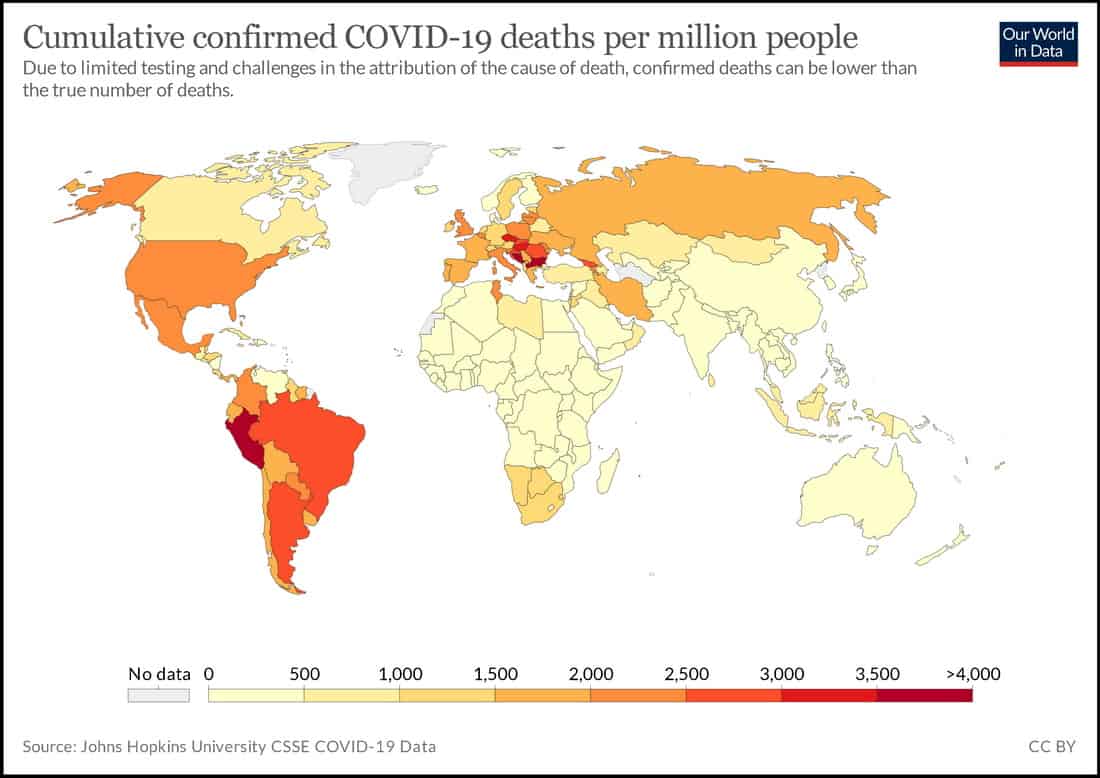 …..Last year, health officials predicted millions would die in Africa from COVID, but instead, the continent has a death rate (161.26 per million population) lower than the world average (653.52 per million population), and Africa is described by the World Health as being “one of the least affected regions in the world” in its weekly pandemic reports.

According to a recent report from the Associated Press, COVID-19 seems to have become a thing of the past. In Zimbabwe, for example, only 33 new cases and zero deaths were recorded last week.

A study published in April 2020 in the American Journal of Tropical Medicine and Hygiene warned that, “there is currently no evidence that CQ or HCQ, two low-cost drugs for which we have extensive experience for treatment of malaria and rheumatic disorders, has beneficial effects on the clinical course of COVID-19 patients,” and then warned that, “the off-label use of CQ and HCQ to prevent or treat COVID-19 in Africa and elsewhere must be viewed with greatest caution, considering potential serious toxicities and benefit versus risk. If the effectiveness of these and other drugs is established in global trials, therapeutics for COVID-19 will require further operational evaluation in Africa.”

Because of the high rates of malaria in Africa, CQ and HCQ are widely available there and have been used to treat malaria for decades. It’s a cheap, off-patent drug, that was unfortunately highly politicized in the early weeks of the pandemic because President Trump cited a study showing it was potentially a gamechanger in the fight against COVID.

Unfortunately, Democrats cared more about defeating Trump in the election than saving lives, and fueled hysteria against the drugs. Anyone touting the drug’s potential was silenced, including doctors. Many peer-reviewed studies have shown that HCQ contributes to less severe symptoms and lower mortality when administered early. Unfortunately, those studies were ignored while studies that claimed HCQ caused higher mortality were given wide coverage in the media… and some turned out to be bogus.

Imagine how many lives might have been saved had we really been “in this together” instead of so many being “in this to get Trump.”

And this same story via Doctors for COVID Ethics

According to a recent news story, “scientists are mystified” about the low numbers of COVID-19 cases and deaths in African countries: “Africa doesn’t have the vaccines and the resources to fight COVID-19 that they have in Europe and the U.S., but somehow they seem to be doing better.”

Interestingly, aside from confirming yet again that the vaccines don’t work, the African data also provide evidence supporting the efficacy of hydroxychloroquine. A new study by economists Hideki Toya and Mark Skidmore, which carefully controlled for other plausible contributing factors such as age distribution, healthcare capacity, and sunlight (exposure to which increases vitamin D levels), shows a convincing protective effect of hydroxychloroquine. While this is primarily an antimalarial drug, its antiviral properties have long been recognized. The same is true of ivermectin, which shows compelling activity against SARS-CoV-2 in vitro and also in vivo.

Note that the morbidity and mortality data analyzed by Toya and Skidmore are unaffected by vaccination rates, since they are from early 2020. You can read their study here: LIGHTHOUSE ECONOMICS

WHAT IS A MAN’S LIFE WORTH?

A Chicago-area judge saved a grandfather’s life with the single question that exposes hospitals blocking doctors from using a safe, FDA-approved drug: Why? (RESCUE with Michael Capuzzo)

Sun Ng, a retired contractor from Hong Kong, traveled to Illinois to celebrate his only granddaughter’s first birthday. He got covid and was near death in a Chicago-area hospital. All other options were exhausted, but the hospital refused to give Mr. Ng a generic, FDA-approved drug with an extraordinary safety record that a doctor believed could safe his life.

Finally, a judge asked the right question about ivermectin.

Put another way: If a man is dying of covid in an ICU and all else has been tried, why not order a hospital to give a safe, last-ditch drug?

Edward Hospital, located near Chicago, offered three arguments as to why Sun Ng, seventy-one, should not be given ivermectin:

“I can’t think of a more extraordinary situation than when we are talking about a man’s life,” he said in a November 5 decision that is a model of rational decision-making in an irrational era.

“I am not forcing this hospital to do anything other than to step aside,” he continued in a Zoom hearing. “I am just asking—or not asking—I am ordering through the Court’s power to allow Dr. Bain to have the emergency privileges and administer this medicine.”

The hospital ultimately stepped aside. Dr. Alan Bain, an internist, administered a five-day course of 24 milligrams of ivermectin, from November 8 through November 12.

Ng, who with his wife, Ying, had come from Hong Kong to celebrate their granddaughter’s birthday, was able to breathe without a ventilator within five days—he, in fact, removed the endotracheal himself. He left the ICU Tuesday, November 16, and, although confused and weak, was breathing Sunday without supplemental oxygen on a regular hospital floor.

“Every day after ivermectin, there was accelerated and stable improvement,” said Dr. Bain, who administered the drug in two previous court cases after hospitals refused. “Three times we’ve shown something,” he told me. “There’s a signal of benefit for ventilator patients.”

Ng’s remarkable progress stands in sharp relief to the repeated attempts by Edward-Elmhurst Health, the hospital’s managing system, to thwart the use of ivermectin. It succeeded in having the court’s initial November 1 order dismissed by claiming Ng was in better health than his lawsuit contended (he wasn’t). It then defied the November 5 order, saying Dr. Bain was not vaccinated (a negative test resolved the issue).

Moreover, after Ng’s treatment was complete, the hospital system filed notice that it would appeal the order that had already been carried out. It did this even though Sun Ng seemed to have benefited greatly.

The patient’s improvement, or condition generally, did not seem to matter…..

(READ IT ALL…. A WONDERFUL STORY)

Dr. Marik received his medical degree from the University of the Witwatersrand, Johannesburg, South Africa. Dr. Marik did Critical Care Fellowship in London, and Ontario, Canada. Dr. Marik has worked in various teaching hospitals in the USA, since 1992. He is a board certified in Internal Medicine, Critical Care Medicine, Neurocritical Care and Nutrition Science. Dr. Marik is currently Professor of Medicine and Chief of Pulmonary and Critical Care Medicine, Eastern Virginia Medical School in Norfolk, Virginia. Dr. Marik has written over 500 peer-reviewed papers and books, 43,000 scholarly citations of his work, and a research “H” rating higher than many Nobel Prize winners, 80 book chapters and authored four critical care books. He has been cited over 25,000 times in peer reviewed publications.

Bad news about the dangers that mRNA vaccines may pose to the heart and blood vessels keeps coming.

A new study of 566 patients who received either the Pfizer or Moderna vaccines shows that signs of cardiovascular damage soared following the shots. The risk of heart attacks or other severe coronary problems more than doubled months after the vaccines were administered, based on changes in markers of inflammation and other cell damage.

Patients had a 1 in 4 risk for severe problems after the vaccines, compared to 1 in 9 before.

Dr. Steven Gundry, a Nebraska physician and retired cardiac surgeon, presented the findings at the Scientific Sessions of the American Heart Association’s annual conference in Boston last week. An abstract is available in Circulation, the AHA’s scientific journal……..

In this interview, Steve Kirsch, executive director of the COVID-19 Early Treatment Fund, reviews some of the COVID jab data he’s presented to the U.S. Food and Drug Administration and the Centers for Disease Control and Prevention during various meetings.