This has got to be one of the funniest and yet saddest things I have seen yet. Bruce Jenner aside.

But if she “feels” she is black… she is, right? Would this be called Ethnicity Identity Disorder (EID)?

But this confuses me. If I can be whatever gender I want if I say I am, why can’t I be black if I believe myself to be? And then why isn’t everyone championing my choice?

SPOKANE, Wash. — Controversy is swirling around one of the Spokane region’s most prominent civil rights activists, with family members saying the local leader of the NAACP has falsely portrayed herself as black for years.

Rachel Dolezal is president of the Spokane chapter of the NAACP, chair of the city’s Office of Police Ombudsman Commission, and an adjunct professor at Eastern Washington University.

The Spokesman-Review reported Thursday that questions have arisen about her background and her numerous complaints to police of harassment. The story was first reported by the Coeur d’Alene Press.

Dolezal’s mother, Ruthanne, says the family’s ancestry is Czech, Swedish and German, with a touch of Native American heritage.

Dolezal has identified herself in application materials as white, black and Native American.

Police say they have found little evidence of racial harassment.

Just classic, reporter corners her and asks her flat out, “Are you African-American?” Her answer? “I don’t understand the question”….

Here is the raw interview that “outed” Miss Dolezal:

HotAir points out the obvious as well:

I posted the following in the comment section of Gay Patriot:

As I see it… the Left is devouring itself… they are taking away their tools to separate and conquer. Undermining their won arguments of race-class-gender, and wanting to throw things like the 14th Amendment away. Each layer of their thinking is built on a false perception… soon they have so many layers in this house of cards that it will topple. I hope sooner than later.

This theme of the Left destroying any foundation for grievances to be held against any minority or small grouping of people/person’s is picked up as well by Steven Crowder:

Gay Patriot is on the same page as well, noting the “fluidity” of these “protected” classes:

…As I read it, I could not help but wonder whether there is race fluidity in addition to gender fluidity? If a person can be whatever gender they want to be despite the biological reality of their genetic and physical make-up, then why can’t they be whatever race they feel they are? Why should those same rules not apply to race?

It used to be thought that a man claiming to be a woman had no more grip on reality than a man claiming to be Napoleon or a bunny rabbit. But the culture has evolved, and society has decided that for a man to be woman requires nothing more than hormone treatments, surgery, and make-up. (Which, as an aside, seems rather insulting to real biological women.) If race is an identity, than why should people have any less right to determine what their race in addition to their gender?…

I have been pointing this out for years, with the thanks to an author who wrote well on this topic of illiberal liberalism. Here is the idea in a nut shell that is expressed in his books:

“If homosexuality is really genetic, we may soon be able to tell if a fetus is predisposed to homosexuality, in which case many parents might choose to abort it. Will gay rights activists continue to support abortion rights if this occurs?”

Dale A. Berryhill, The Liberal Contradiction: How Contemporary Liberalism Violates Its Own Principles and Endangers Its Own Goals (1994), 172.

In other words… there are all these new “rights,” special rights — if you will — making “equal under the law” a thing of the past… thus, you have all these interest groups and new protections clashing. And they will eat each-other. But like I have said for years as well, this frustration of “Utopia Lost” makes the Left violent. Get ready, it will be a bumpy ride. 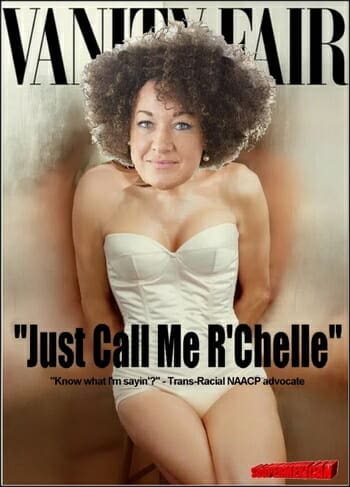 My prediction… just like with people who have GID (gender identity disorder), she may commit suicide, as, they do not find fulfillment for what they are trying to fill. I hope — instead — she finds some real Christian friends to hold her accountable and writes a book in a couple years… a great testimony on where our natural self brings us. OR, we will have a sad sideshow of the depths of self-delusion and “coming-out” of yet a new frontier of the craziness of leftist ideals.

What else does this craving, and this helplessness, proclaim but that there was once in man a true happiness, of which all that now remains is the empty print and trace? This he tries in vain to fill with everything around him, seeking in things that are not there the help he cannot find in those that are, though none can help, since this infinite abyss can be filled only with an infinite and immutable object; in other words, by God himself.

Take note as well that she perpetuated in many places that she had a black son (which was her brother adopted by her parents), and her dad.