Chuck says that we can learn from the Texas failure in light of Biden’s disastrous Green Energy plan. [RPT: DeVore mentions that these wind farms should with their own money — pay for battery storage as well as the gas plants that back up their failure to meet energy goals. THIS would give a closer to reality cost per megawatt. He also notes no study has included “reliability” as a facot yet in cost. I am sure it is coming at some point.]

The Global Trends in Renewable Energy Investment 2019 report stated that in the previous 10 years the world had spent $2.6 trillion on solar and wind power subsidies – which they framed as a good thing. Since we need to get billions off wood and dung, the largest sources of pollution, that so much money only led to 1,650 gigawatts(GW) of energy should have environmentalists concerned.

Instead of focusing on how we can get energy, and therefore water and sanitation. to the poorest, activists continue to create propaganda about natural gas and nuclear while claiming solar and wind are ready.

Data show the opposite. What did we get for our hundreds of billions in spending in the US? Not much except a feel-good fallacy and the chance to make some political donors richer. ….

[RPT: This is called crony capitalism… or, crony corporatism]

Mark Mills and James Meigs joins John Stossel to discuss the Green New Deal, the limits of wind and solar power, and the “magical thinking” of an all-renewable energy future.

Countries around the world are embracing subsidies to expand the production of renewables, and environmentalists claim that we’re on the cusp of a tech-driven energy revolution that will make oil and gas obsolete. Are they right?

Not likely. According to Meigs and Mills, improvements in wind and solar technology are reaching their theoretical limits. It would be virtually impossible to generate the amount of wind and solar power necessary to replace the world’s oil and gas consumption. And yet, renewables enjoy strong political support, while nuclear technology, our best source of clean, reliable, and—yes—safe electricity, faces intense political opposition

AMERICAN THINKER starts us out… I will support the main contentions in that story with other sources to follow:

….When wind or solar is producing, the fossil fuel plants are throttled back and they use less fuel. If, for example, a coal plant was closed when wind was added to the grid, the safety margin would be compromised.

Viewed from the effect on the economy, adding wind or solar electricity provides the benefit of reduced fuel consumption in backup fossil fuel plants. This saving in fuel amounts to about $15 per megawatt hour, the cost of natural gas to generate a megawatt hour of electricity.  The cost of coal is similar. The backup fossil-fuel plant still has to have its full staff and may have more costly maintenance due to the up-down style of operation forced by the introduction of erratic energy. If the renewable energy costs more than $15 per megawatt hour, then it is not competitive. Wind or solar power actually costs around $80 per megawatt hour.

How can I claim that wind or solar cost $80 when power purchase agreements at $25 per megawatt hour are often touted in the press? Even at $25 the wind or solar is far from competitive. The gap between $80 and $25 is accounted for by subsidies. The $10 difference between $25 and $15 is also a subsidy because the purchaser is paying $25 for the electricity that could be generated in a backup fossil fuel plant, that already exists and that must exist, for $15. What are the subsidies that lower the $80 cost to the publicized $25?

The biggest and most important subsidy is not an explicit subsidy but a mandate. Thirty states have renewable portfolio standards. These are laws that require the utilities to supply a certain percentage of renewable power. For example, California has a law that 60% of its power must be renewable by 2030. The consequence of the mandate is that the utility has to grant whatever terms are required to convince investors to build the renewable power plants. In practice this results in the utility promising to purchase all the power generated for 25 years at a fixed rate. The contract is signed before a shovel of dirt is moved. Forcing utilities to buy renewable power puts the suppliers of renewable power in an advantageous position. The subsidy that reduces the cost from $80 to $25 are federal explicit subsidies, better financing, and lower required rate of return that results from having a 25-year contract in hand from a credit worthy utility. There is a federal tax credit that pays up to 30% of the plants cost. Additionally, there is a tax subsidy called tax equity financing that allows a highly taxed partner to the investor to divert money from the federal treasury to the project. This subsidy depends on special depreciation rules enacted by congress to subsidize renewable energy.

Here is an example from one of the coldest areas regarding subsidies:

These values, which represent the cost of wind and solar energy without subsidies, are anything but cost competitive with natural gas and coal prices, which we calculated to be $30.12 and $33.23 per MWh in Minnesota, respectively, based on utility form 1 filings to the Federal Energy Regulatory Commission (FERC).

In fact, these values bring wind and solar energy to the top of the list, as $54.59 and $94.00 are both more expensive than any other baseload energy source available in Minnesota, including coal, combined cycle natural gas, nuclear, and hydroelectric power. 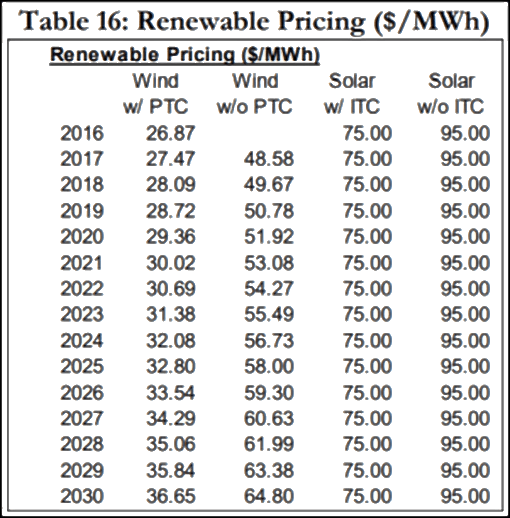 Xcel Energy suggests the same as Otter Tail in their most recent resource plan.

Wind and solar energy have been and will continue to be bad investments for the state of Minnesota.

Not only are they the two most expensive energy sources in the state, but they are inherently unable to provide enough power to supply 100 percent of electricity demand throughout the day, as they need backup generation on standby for when the wind isn’t blowing, and sun isn’t shining.

Wind and solar energy are still Minnesota’s most expensive energy sources, despite attempts by renewable advocates to convince the public that renewable energy sources are cost competitive, or even cheaper than coal, nuclear, or natural gas.

…Wind and solar farms in the United States, for example, are often only profitable because of the subsidies they collect. For wind, that is the production tax credit (PTC), which provides about a $23 per megawatt-hour subsidy to producers of wind energy. Each time renewing the PTC is up for debate in Congress, the number of planned wind projects plummets. As even the American Wind Energy Association, a group paid to represent the interests of the wind industry, noted in 2013, the most dramatic decline was from 2012 to 2013, when there was a 92 percent drop in installations of wind turbines.

Unfortunately, solar energy isn’t any different. The Government Accountability Office lists 345 programs available to solar energy producers and the influence of these subsidies is immense. In 2017, for example, the Solar Energy Industries Association expects a 57 percent decrease in installed solar capacity if the Investment Tax Credit, just one of the many programs available, is not renewed by Congress.

Even though European countries are often pointed to as evidence that renewable sources can provide the electricity consumers need, just as often the additional cost of those sources is unmentioned. It’s true that European countries generally use more electricity generated from renewable sources, but government mandates, not consumer choice, are often the cause. Still, European consumers bear the brunt of the costs, paying higher prices in addition to funding the subsidies and tax breaks that energy corporations collect…..

Here is the latest numbers regarding subsidies and tax breaks: 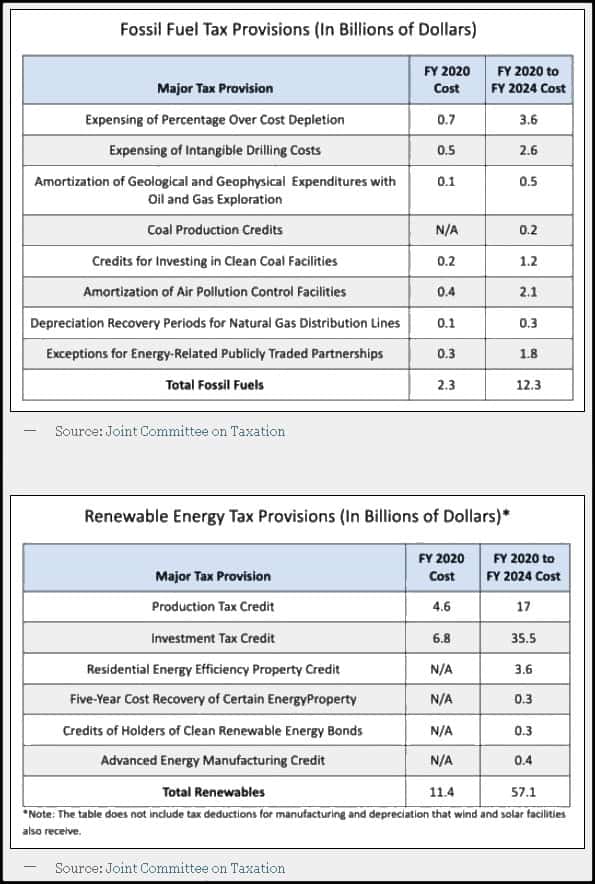 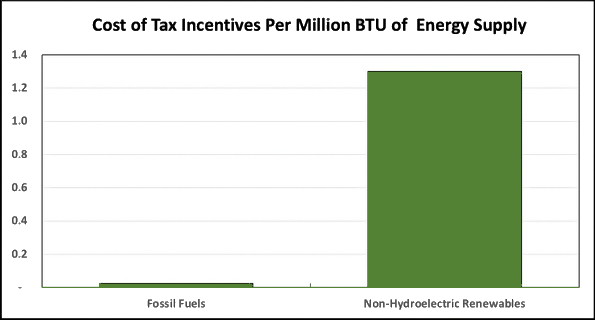 President Biden is hurting American jobs by his war on fossil fuels through the cancellation of the Keystone pipeline permit, ban on oil and gas leasing on federal lands and waters, and his elimination of fossil fuel tax deductions that mainly support small independent oil and gas producers, who find most of America’s oil. Given that fossil fuels supply 80 percent of the nation’s energy and receive one-fifth of the subsidies that renewable fuels receive from the federal government, they are a far better investment than renewable energy. Except, of course, to the companies involved in gouging taxpayers for green energy subsidies.

President Biden is misleading the public by saying fossil fuels receive federal tax incentives of $40 billion—a number more in-line with what wind and solar receive from the federal government. Further, President Biden is not telling the public that fossil fuels supply 80 percent of our energy and that wind and solar power only supply 3.6 percent, after receiving years of federal subsidies.