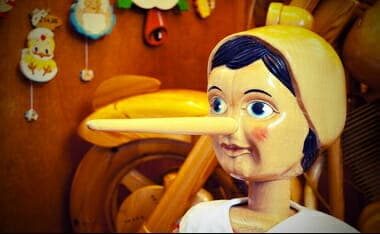 Clay Travis and Buck Sexton wade through the left’s lies about our interview with Donald Trump. These journos have nothing else left but to gaslight and demonize Trump.

REAL CLEAR POLITICS notes the out of context nature of the MSM narrative:

BUCK: Mr. President, in the last 24 hours we know Russia has said that they are recognizing two breakaway regions of Ukraine, and now this White House is stating that this is an “invasion.” That’s a strong word. What went wrong here? What has the current occupant of the Oval Office done that he could have done differently?

PRESIDENT DONALD TRUMP: Well, what went wrong was a rigged election and what went wrong is a candidate that shouldn’t be there and a man that has no concept of what he’s doing. I went in yesterday and there was a television screen, and I said, “This is genius.” Putin declares a big portion of the Ukraine — of Ukraine. Putin declares it as independent. Oh, that’s wonderful.

So Putin is now saying, “It’s independent,” a large section of Ukraine. I said, “How smart is that?” And he’s gonna go in and be a peacekeeper. That’s strongest peace force… We could use that on our southern border. That’s the strongest peace force I’ve ever seen. There were more army tanks than I’ve ever seen. They’re gonna keep peace all right. No, but think of it. Here’s a guy who’s very savvy… I know him very well. Very, very well.

Marco Rubio says of the interview:

“I heard that interview,” Rubio said during an interview on CNBC’s “Squawk Box.” “I’m not going off the press reports. I heard the interview. I didn’t hear him say that. I heard what I heard. A guy who was being sarcastic. He was saying, Oh, look at this guy, he’s a genius, this, that and the other.”

Trump came under fire last week after his comments on the Clay Travis and Buck Sexton radio show, on which he referred to Putin as being “savvy” and a “genius.”

“If it wasn’t for what the Trump administration did and laid the groundwork for, there’s no way Ukraine would still be able to hold out today,” Rubio said.

RED STATE rightly notes what Clay and Buck did when speaking about what the Left and Press has run with counters basic English context when “referring to someone as a ‘genius’ can carry with it, alternative meanings.”

…Certainly, Trump’s talk on Putin has been at times sycophantic, something this author will not discount. However, referring to someone as a “genius” can carry with it, alternative meanings.

For instance, when it comes to people like David Axelrod or Rahm Emanuel, I can admire their genius within politics and hold them in utter contempt because of how they choose to use their gifts. Adolf Hitler was a genius as an orator, but a genocidal sociopath. I do not presume to understand Trump’s motivations in his less-than-polished statements about the Russian leader; however, I simply state that Trump can believe Putin is a genius and a sociopath. While I can think Trump is a genius in manipulating the media (and trust me… he is), I can disagree with him on things like increasing deficit spending and his lowest-common-denominator rhetoric.

When it came to Putin though, the left and the media (but I repeat myself) did their damnedest to tie Trump to Putin and Russia, despite the total lack of evidence of such a connection. Whether it was Russia-gate, in which Trump and his officials were never charged, or lofty stories of Trump and his behavior with Russian prostitutes, or even flat out fabrications, like was spun regarding Russian bounties on American servicemen in Syria, the media went to all lengths to make Trump appear weak against Putin and the Russians.

Yet one stark reality cannot be ignored: Putin took no action against any of his neighbors during the Trump Administration.

Regardless of Trump’s statements (which I often took issue with), the result of his foreign policy led to the lack of the entry of the US in any additional foreign conflicts for the first time in decades. That includes saber-rattling with any foreign powers.

Meanwhile, when you look at Trump’s predecessor, the same cannot be said.

Beginning immediately in 2009, Obama faced Russian games in Crimea in Ukraine. Russia, which had been exerting influence in the region towards the end of 2008 (after Obama’s election but before he took office) thrust the new leader (Obama) into a place many felt he was unprepared to be. Obama sat idly by and watched as Putin and the Russians pushed the area to the brink of war.

In the months leading up to the conflict, the Russians had been issuing Russian passports to residents of other countries, an act which granted those people the rights of other Russian citizens, including the protection of the Russian military, should they need it. Protests, largely organized and funded by Russia, began popping up in Crimea, sending the region into chaos. Of course, this was the goal of the Russians, so they could use this conflict as a reason to enter Ukraine to reestablish peace on behalf of the (new) Russian citizens living in that region.

Hillary Clinton jumps into the fray and gets walloped! PJ-MEDIA has a great post in which I will steal two tweets from: 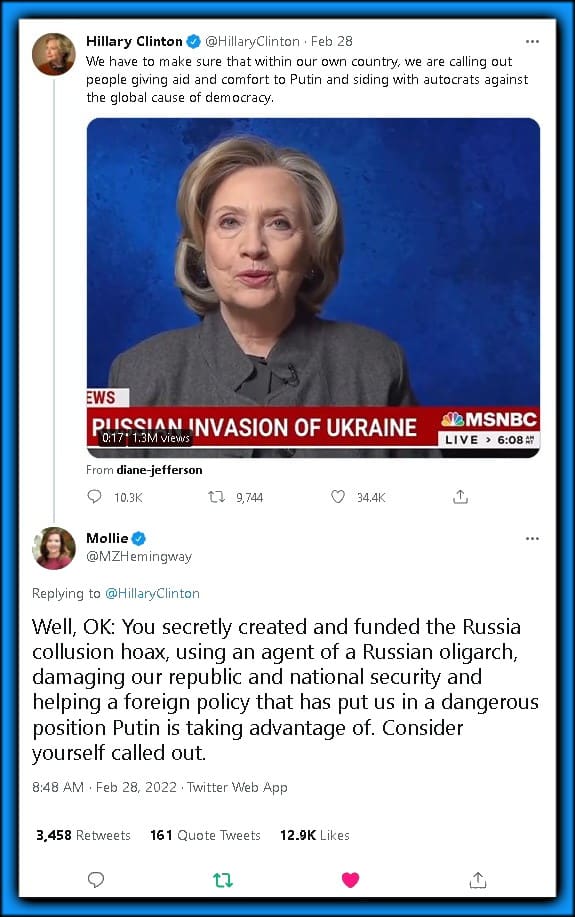 Clay Travis and Buck Sexton break down Hillary Clinton’s lies about our interview with Donald Trump. How much wrong can the Democrats fit into just one year?