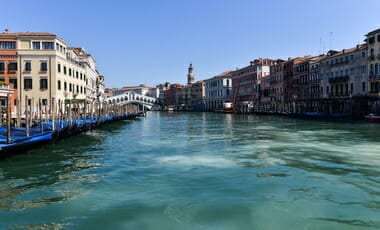 Larry Elder interviews T.J. Rodgers about his WALL STREET JOURNAL article entitled,  “Do Lockdowns Save Many Lives? In Most Places, the Data Say No: The Speed With Which Officials Shuttered The Economy Appears Not To Be A Factor In Covid Deaths.” The article is excellent, however, I just isolated a shorter version of the interview to include comments on Sweden.

An excellent short commentary on the larger article can be found at TECH STARTUPS: “Lockdowns Don’t Seem to Save Many Lives in Most Places, New Data Shows.” If lockdowns didn’t statistically save lives like anticipated, we have this tragedy to deal with (DAILY WIRE), and politicians and so-called “experts” have answering to do!

In addition to record unemployment numbers, experts now predict that a “wave” of small business bankruptcies is on the horizon — and it could leave the United States with 40% fewer small businesses.

The New York Times reports that the United States Chamber of Commerce estimates “more than 40 percent of the nation’s 30 million small businesses could close permanently in the next six months” — a statistic entirely attributable to the coronavirus pandemic and ensuing lockdowns.

The economic consequences of such a mass business failure could last for “generations,” the NYT reports.

“Commercial bankruptcies in the first quarter of 2020 ticked up 4 percent from a year earlier, according to data from the American Bankruptcy Institute,” according to the NYT. “But many of those filings were made before the pandemic, when the economy was healthy. Right now, some owners are waiting to find out if they will receive federal stimulus aid before deciding whether to file for bankruptcy protection.”

Restaurants and retail services are, of course, the most vulnerable, but family-owned enterprises, like heating and cooling operations and plumbing companies, and even health-care services, particularly small dental and pediatric practices, are in severe danger.  The Small Business Restructuring Act, which took effect in February, could help some small businesses stay above water, but many are struggling to keep people on the payroll, to compete with unemployment insurance, and to handle mounting debt.

Of course, large companies — and, in particular, large retail outlets — are not immune to the economic effects of coronavirus. Brands like Neiman Marcus, J. Crew, JC Penney, Macy’s, Gap, GNC, and David’s Bridal are all staring down the possibility that their stores may not reopen once coronavirus lockdowns are lifted, according to USA Today. CNBC says that at least 150 companies, from airline conglomerates to healthcare providers, have warned investors to expect major earnings hits.

The bad economic news keeps piling. In addition to closures, a jobs report, due out from the Department of Labor on Thursday, “will almost certainly show that the coronavirus pandemic inflicted the largest one-month blow to the U.S. labor market on record,” per the Wall Street Journal……

Do fast shutdowns work to combat the unfold of Covid-19? Joe Malchow, Yinon Weiss and I needed to search out out. We got down to quantify what number of deaths have been brought on by delayed shutdown orders on a state-by-state foundation.

To normalize for an unambiguous comparability of deaths between states on the midpoint of an epidemic, we counted deaths per million inhabitants for a set 21-day interval, measured from when the dying charge first hit 1 per million—e.g.,‒three deaths in Iowa or 19 in New York state. A state’s “days to shutdown” was the time after a state crossed the 1 per million threshold till it ordered companies shut down.

We ran a easy one-variable correlation of deaths per million and days to shutdown, which ranged from minus-10 days (some states shut down earlier than any signal of Covid-19) to 35 days for South Dakota, one in every of seven states with restricted or no shutdown. The correlation coefficient was 5.5%—so low that the engineers I used to make use of would have summarized it as “no correlation” and moved on to search out the true reason behind the issue. (The trendline sloped downward—states that delayed extra tended to have decrease dying charges—however that’s additionally a meaningless consequence because of the low correlation coefficient.)

No conclusions could be drawn concerning the states that sheltered rapidly, as a result of their dying charges ran the total gamut, from 20 per million in Oregon to 360 in New York. This vast variation implies that different variables—like inhabitants density or subway use—have been extra necessary. Our correlation coefficient for per-capita dying charges vs. the inhabitants density was 44%. That implies New York Metropolis may need benefited from its shutdown—however blindly copying New York’s insurance policies in locations with low Covid-19 dying charges, akin to my native Wisconsin, doesn’t make sense. 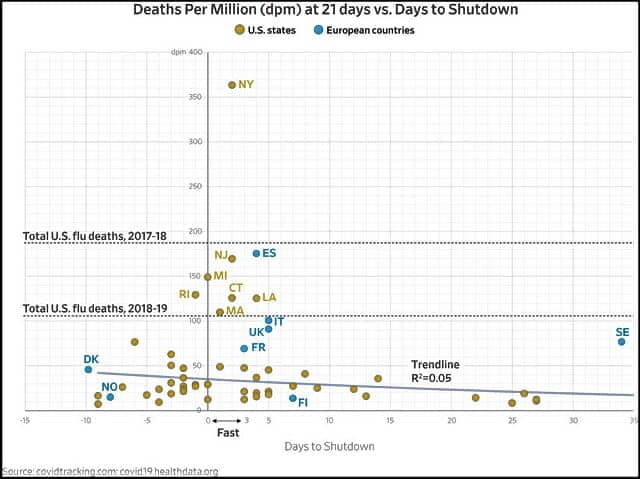 Sweden is preventing coronavirus with common sense tips which can be a lot much less economically damaging than the lockdowns in most U.S. states. Since individuals over 65 account for about 80% of Covid-19 deaths, Sweden requested solely seniors to shelter in place slightly than shutting down the remainder of the nation; and since Sweden had no pediatric deaths, it didn’t shut down elementary and center colleges. Sweden’s containment measures are much less onerous than America’s, so it will possibly preserve them in place longer to forestall Covid-19 from recurring. Sweden didn’t shut down shops, eating places and most companies, however did shut down the Volvo automotive plant, which has since reopened, whereas the Tesla plant in Fremont, Calif., was shuttered by police and stays closed.

How did the Swedes do? They suffered 80 deaths per million 21 days after crossing the 1 per million threshold stage. With 10 million individuals, Sweden’s dying charge‒and not using a shutdown and big unemployment‒is decrease than that of the seven hardest-hit U.S. states—Massachusetts, Rhode Island, Louisiana, Connecticut, Michigan, New Jersey and New York—all of which, besides Louisiana, shut down in three days or much less. Regardless of tales about excessive dying charges, Sweden’s is in the midst of the pack in Europe, akin to France; higher than Italy, Spain and the U.Okay.; and worse than Finland, Denmark and Norway. Older individuals in care properties accounted for half of Sweden’s deaths.

We must always cheer for Sweden to succeed, not ghoulishly bash them. They could show that many features of the U.S. shutdown have been errors—ineffective however economically devastating—and level the way in which to correcting them.