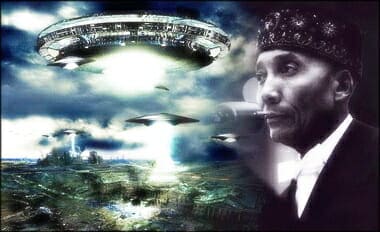 Islam in Iran has joined the wacky world of the NEW AGE UFO CULTS category via the Ayatollah. Remember, the Nation of Islam is already in this category (among others)…

Iranian Ayatollah: The ‘Hidden Imam’ Will Come To Earth In A Vessel ‘Like A Spaceship’

TEL AVIV – An Iranian Grand Ayatollah recently said that the Mahdi – the Shi’ite version of the messiah – will arrive in a “super-modern vessel like a spaceship” and that until that time there will be no “peace, security, or decency” on earth.

Ayatollah Naser Makarem Shirazi was answering questions about the arrival of the Mahdi, otherwise known as the Hidden Imam, who according to Islamic eschatology will conquer the world before the Day of Judgment, ridding it of evil. Shirazi’s explanations, translated and published Friday by the Middle East Media Research Institute (MEMRI), were based on Islamic teachings and hadiths, as well as quotes from preceding Imams.

When this vessel moves, it sounds like thunder and has the speed of lightening, the Ayatollah said, “slashing the heart of the sky with extraordinary force, and in this way it can advance to any point in the firmament.”

“Therefore, this is a super-modern vessel, and there is none like it today. It is like a spaceship and like other swift and amazing space vessels that are found [only] in stories today, but nobody knows how close [these vessels] come to truth and reality. Maybe it will be like [a spaceship], but in any case it is not a spaceship.”

This story comes from the Wall Street Journal, and shows that there is still much opposition in Iran coming from many sides, even if it a side we do not actually like — lets hope the CIA can capitalize on this rift:

“After the decision of the Tehran revolutionary tribunal, Abdolmalek Rigi was hanged on Sunday morning in Evin prison,” IRNA said.

It quoted a court statement as saying: “The head of the armed counterrevolutionary group in the east of the country…was responsible for armed robbery, assassination attempts, armed attacks on the army and police and on ordinary people, and murder.”