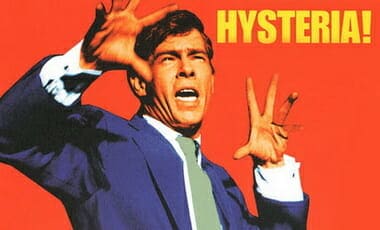 I was asked the following question on Facebook by a friend of the family (my oldest son’s friend to be exact,). She asked:

The short answer is “I am not worried.” Democrats are twice as likely to freak-out about this than are Republicans. (I assume #NeverTrumpers are in the same “Democrat boat.”) HOWEVER, I will say this is the best argument for what the nation is doing writ large (even if I still disagree with it somewhat) — from my Facebook:

Okay. So the best argument I’ve heard so far came from Ben Shapiro for the course of action that we are taking as a country towards the Coronavirus (the Wuhan Virus). And it’s simple, unlike past flues you could have this for a few days and not realize you have it before the symptoms kick in. During this time you are highly contagious. Brand new studies show that it can be in the air from you breathing for up to 3 hours in a confined space (say, a room or elevator etc); and it can stay on surfaces for up to 3 days. Now, Italy has more beds per thousand people in hospitals and healthcare systems than does America. Since our Baby Boomer population can be more prone for serious complications in reaction to this, we stand a chance at burdening our emergency rooms/hospitals to well past it’s limits (Italy is at 200% plus capacity and are sending people home essentially to die). So all these precautions are not to “stop” Coronavirus, but to “slow” it’s spread to help alleviate the impact on our health care network. And by slowing it we are allowing a chance for a vaccine to hit the shelves in time to mitigate this flu as it gets worse.

I will answer with the following links (many to my own posts) and updates — I will try and keep it brief, but you know me. First, I am a fan of MICHAEL FUMENTO. I read his book, “The Myth of Heterosexual AIDS: How a Tragedy Has Been Distorted by the Media and Partisan Politics.” And ever since he has been the harbinger to media miscalculations and hysteria. AMERICAN THINKER noted Fumento from an earlier article, quoting:

It’s called “drama,” which is badly needed, because there appears to be nothing very special about this outbreak of the 2019-nCoV or Wuhan ­virus. It should actually be called the DvV, or Déjà vu Virus, because we have been through these hysterias before. Over and over. Heterosexual AIDS, Ebola repeatedly, the H1N1 swine flu that was actually vastly milder than the regular flu and, especially, severe acute respiratory syndrome (SARS) in 2003.

Wuhan is repeatedly labeled “deadly” — but so is every other ­virus most people know about.

Mr. Fumento’s most recent article deals with the virus in an updated fashion: “Coronavirus Going To Hit Its Peak And Start Falling Sooner Than You Think” — In it he notes the following “Law”

(UPDATE… this article was published the 8th of March, and probably uses information from March 4th)

…China is the origin of the virus and still accounts for over 80 percent of cases and deaths. But its cases peaked and began ­declining more than a month ago, according to data presented by the Canadian epidemiologist who spearheaded the World Health Organization’s coronavirus mission to China. Fewer than 200 new cases are reported daily, down from a peak of 4,000.

Subsequent countries will follow this same pattern, in what’s called Farr’s Law. First formulated in 1840 and ignored in ­every epidemic hysteria since, the law states that epidemics tend to rise and fall in a roughly symmetrical pattern or bell-shaped curve. AIDS, SARS, Ebola — they all followed that pattern. So does seasonal flu each year.

Clearly, flu is vastly more contagious than the new coronavirus, as the WHO has noted. Consider that the first known coronavirus cases date back to early December, and since then, the virus has ­afflicted fewer people in total than flu does in a few days. Oh, and why are there no flu quarantines? Because it’s so contagious, it would be impossible.

As for death rates, as I first noted in these pages on Jan. 24, you can’t employ simple math — as everyone is doing — and look at deaths versus cases because those are ­reported cases. With both flu and assuredly with coronavirus, the great majority of those infected have symptoms so mild — if any — that they don’t seek medical attention and don’t get counted in the caseload.

Furthermore, those calculating rates ­ignore the importance of good health care. Given that the vast majority of cases have occurred in a country with poor health care, that’s going to dramatically exaggerate the death rate….

(His articles for the NYP can be found HERE)

BEFORE posting audio of Michael Medved and Dennis Prager discussing the above article with Michael Fumento… I wish to post the latest audio by Dr. Drew Pinsky discussing the issue. (See two previous posted videos from Doc Drew, HERE.) . And he says listen to Dr. Anthony Fauci, whereas Michael Fumento notes in the Medved audio that Fauci has been wrong on every case since the heterosexual AIDS scare. Even with this note, Doc Drew is waay better in his reporting than the Washington Post or CNN:

Celebrity doctor Dr. Drew slams the media for “reprehensible” coverage of the coronavirus spread in the US and tells Americans to “stop listening to journalists” and instead focus only on information provided by the CDC and other health entities.

I think much of this is hysteria. I think also Trump knowing the media well and how Democrats would weaponize this issue, got a jump on this disease/flu season, and against his cabinet’s advice — withing three weeks after this strain was identified… put into action the most aggressive controls yet. (See my post on this HERE.) All while the media and Democrats called him racist for his actions:

Could you imagine the reaction if Trump had just blown this off? HoooBoy!

Despite the real threat of coronavirus, Ebola, and influenza, Dr C explains why most viruses are good for you, and good for the environment.