RED STATE has an excellent short article of which I clip most from: 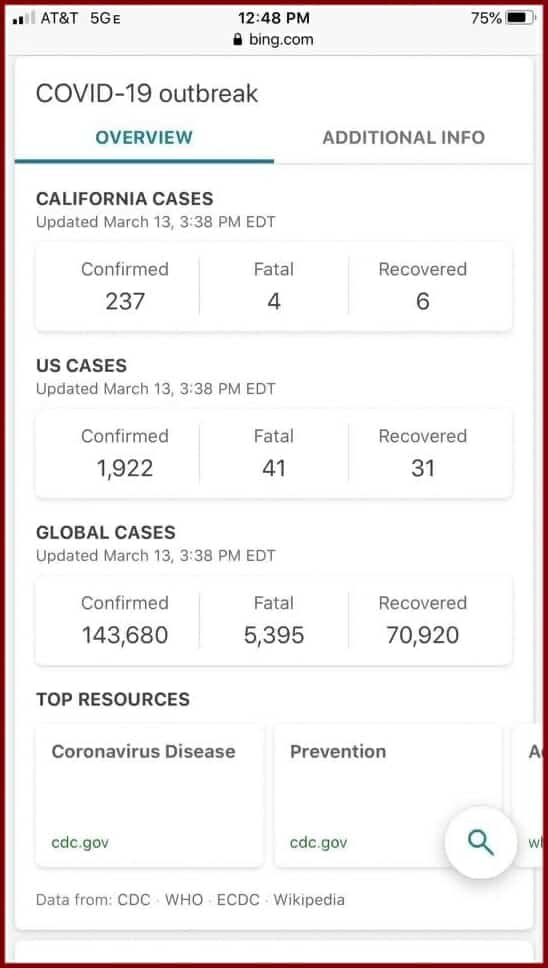 …Journalist Sheryl Atkinson has put together information about the ages and underlying health conditions of the victims and the locations of their deaths.

The most noteworthy fact is that 37 of these deaths occurred in the state of Washington and “25 of the Washington deaths occurred at the Life Care Center nursing facility in Kirkland, where a serious outbreak occurred.” The ages of those who died is not available, but generally, healthy people don’t wind up in nursing homes.

The ages of the other victims in Washington state and the conditions of their health are known and are included in the conclusions below.

Of the remaining eleven, there were four in California, two in Florida and one each in New Jersey, South Dakota, Georgia, Kansas and Colorado.

Before posting, New York just announced the state’s first coronavirus death. A woman, 82, with emphysema had been admitted to a Brooklyn hospital on March 3 and officials say she contracted the virus inside the facility.

I’m not sure if this woman had been a smoker, but it is said that the high rate of smoking in China may have increased the number of deaths. According to Fortune Magazine, “the country’s sky-high smoking rate among men” may add to the “severity of symptoms and the number of coronavirus deaths in China.”…