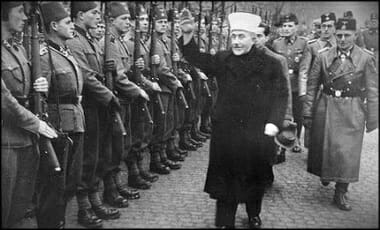 (Below) Haj Amin al-Husseini is the father of the Palestinian Movement. He created PLO/Fatah (now better known as the ‘Palestinian Authority’), the organization that will govern any future Palestinian state. And he was mentor to Yasser Arafat and Mahmoud Abbas, the leaders of that organization. Husseini was also, during World War II, a top Nazi leader who co-directed with Adolf Eichmann the death camp system that murdered between 5 and 6 million European Jews, also known as the Final Solution. These facts are not widely known or understood. Neither has their implication for our understanding of Israeli ruling elite behavior been properly appreciated.

(Below) There are certain myths concerning the origin of the name ‘Palestine’ and of the ‘Arab Palestinians.’ It documents that the ‘Arab Palestinians’ are in fact mostly from other places, and migrated to what is now Israel at the same time as the Zionist Jews, many of them because of the economic boom that the Zionist Jews produced in what was then British Mandate Palestine. The Zionist Jews did not steal the “best” land from Arab landowners but in fact purchased abandoned desert and swamp land from absentee Arab landlords who were quite eager to sell. This was explained by Hajj Amin al Husseini himself. Husseini, father of the Palestinian movement, launched his fourth terrorist attack against the Jews of the Mandate in 1936-39. The violence was so great that the British sent a team to investigate. When questioned, Husseini admitted that the Zionist Jews had not stolen anybody’s land but in fact had bought it. In fact, Husseini had been among the major consolidators and sellers of land, and growing tremendously rich by it.

(Below) PLO/Fatah, now better known as the “Palestinian Authority,” will govern a Palestinian State in the militarily strategic territories of Judea and Samaria (or “West Bank”) if the Middle East “peace process” concludes with a “Two-State Solution.” Given that Iranian leaders daily promise the destruction of Israel, most people assume that PLO/Fatah has nothing to do with Iran. It would be absurd, they implicitly reason, for Israeli leaders to give strategic territory to an Iranian proxy. And yet, it is a historical fact that PLO/Fatah helped install Ayatollah Khomeini in power and helped create the current Iranian Islamist regime. It has maintained a close relationship with this regime ever since.

The following is from GATESTONE:

Killing Jews has become a profitable business. Palestinians who think of launching a terror attack against Jews can rest assured that their well-being and that of their family will be guaranteed while they are in Israeli prison. Here is how it works:

The Western-funded Palestinian Authority (PA) government, through its various institutions, provides a monthly salary and different financial benefits to jailed Palestinian terrorists and their families. Upon their release, they will continue to receive financial aid, and are given top priority when it comes to employment in the public sector. Their chances of getting a job with the PA government are higher than those who went to university, because by carrying out an attack against Jews they become heroes, entitled to a superior job and salary.

For the record, these people have not been imprisoned for running a red light. Most of them are behind bars because they have masterminded suicide bombings and other terror attacks that have killed and maimed hundreds of innocent civilians during the past few decades. In the U.S., these convicted Palestinian terrorists would have been sentenced to life in prison without the possibility of parole, or the death penalty. What they would not be receiving are the privileges offered to them by Abbas and the PA leadership.

Ready for a dose of linguistic reality? In addition to his title as president of the Palestinian Authority, Mahmoud Abbas is also chairman of the Palestine Liberation Organization (PLO). So it makes no difference at all whether the PA or the PLO is paying salaries to the terrorists: the same man is authorizing the funds. In reality, the PA and the PLO are one and the same. Israel signed the Oslo Accords with the PLO, and as a result of these agreements, the PA was created. We are dealing with the same people and same ideology.

So, when you hear that it is the PLO, not the PA, that pays the terrorists’ salaries, you might want to mention that this statement is a sleight of hand designed to dupe unsuspecting and well-intentioned American and European donors.

Let us look beyond the smoke and mirrors: Palestinians and their families are being financially rewarded by the West for taking part in terror attacks against Jews. It does not take a brain surgeon to figure out that this promotes terrorism. A Palestinian who kills or wounds a Jew can lie comfortably in his prison cell, secure in the knowledge that his future and that of his wife and children taken care of.

Welcome to the world of President Abbas and his government. By providing financial and other aid to those involved in terrorism against Israel, these leaders actively encourage Palestinians to choose the path of violence, and not peace, in dealing with the Israelis….. 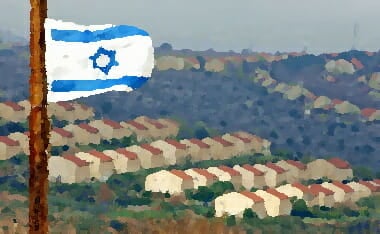