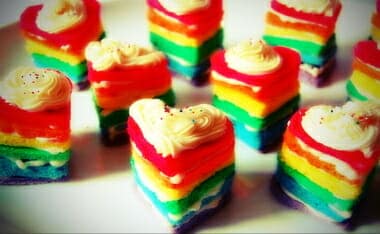 In another case a Christian bakery shut down due to mob tactics (e.g., fascism):

NPR’s Nina Totenberg, on the July 8, 1995 edition of Inside Washington wished for Jesse Helms and/or his grandkids to get AIDS.

….“It’s a sad day for Christian business owners and it’s a sad day for the First Amendment,” owner Aaron Klein told me. “The LGBT attacks are the reason we are shutting down the shop. They have killed our business through mob tactics.”

Last January, Aaron and Melissa Klein made national headlines when they refused to bake a wedding cake for a lesbian couple.

Klein tells me he has nothing against homosexuals — but because of their religious faith, the family simply cannot take part in gay wedding events.

“I believe marriage is between a man and a woman,” he said. “I don’t want to help somebody celebrate a commitment to a lifetime of sin.”

The lesbian couple filed a discrimination with the Oregon Bureau of Labor and Industries and told their story to local newspapers and television statements.

Within days, militant homosexuals groups launched protests and boycotts. Klein told me he received messages threatening to kill his family. They hoped his children would die. [an old liberal tactic, see video to the right.]

The LGBT protestors then turned on other wedding vendors around the community. They threatened to boycott any florists, wedding planners or other vendors that did business with Sweet Cakes By Melissa.

“That tipped the scales,” Klein said. “The LGBT activists inundated them with phone calls and threatened them. They would tell our vendors, ‘If you don’t stop doing business with Sweet Cakes By Melissa, we will shut you down.’”….

NewsBusters has the Hammer going off!

NewsBusters has another story where an NPR host admits:

GLASS: As somebody who works in public radio, it is killing me that people on the right are going around trying to basically rebrand us saying that it’s biased news, you know, it’s left-wing news, when I feel like anybody who listens to the shows knows that it’s not, and we are not fighting back. We’re not saying anything back. I find it completely annoying, and, and I don’t understand it.

BOB GARFIELD, ‘ON THE MEDIA’ CO-HOST, NPR: Okay, so this gets back to not only Brooke’s problem, finding a metric to report on this story, but it’s especially difficult when you and I both know that if you were to somehow poll the political orientation of everybody in the NPR news organization and all of the member stations, you would find an overwhelmingly progressive, liberal crowd. Not uniformly, but overwhelmingly.