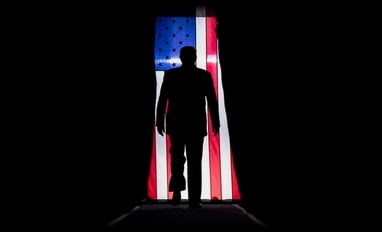 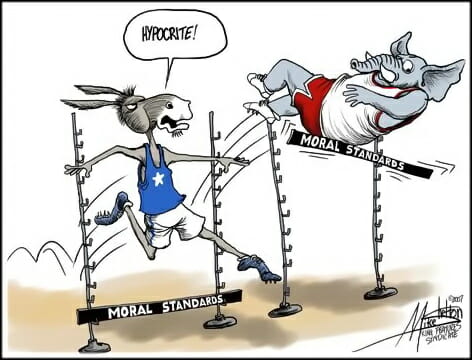 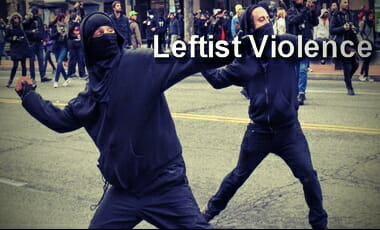 I thought this Twitter response[s] tp Katy Tur was excellent (TWITCHY)… and it seems like people forget the past easily (when Democrats are involved): 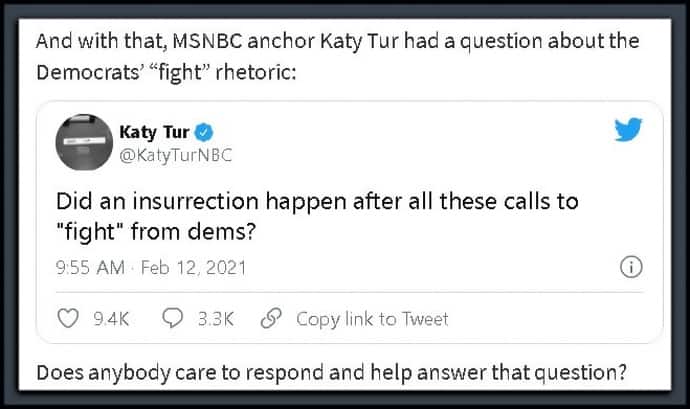 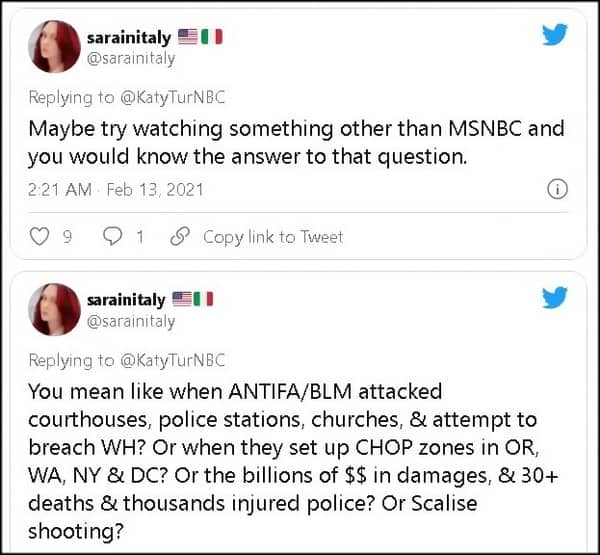 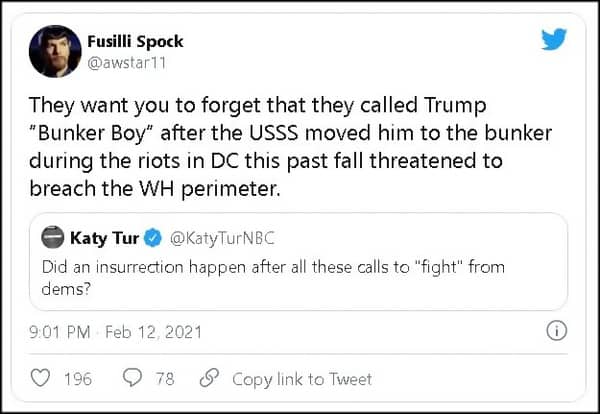 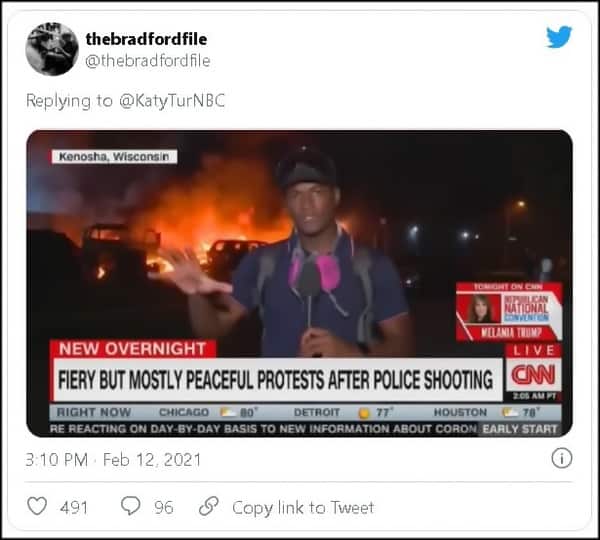 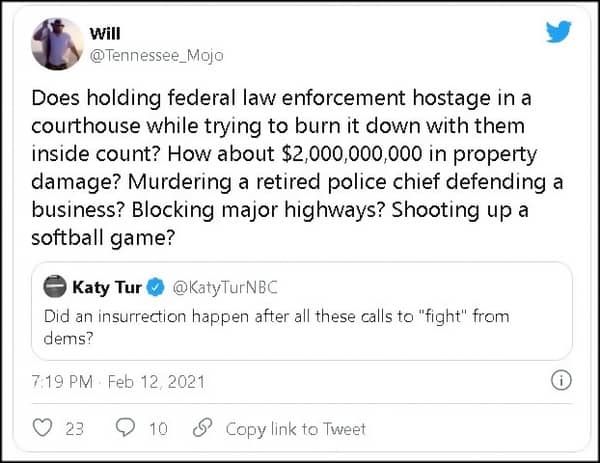 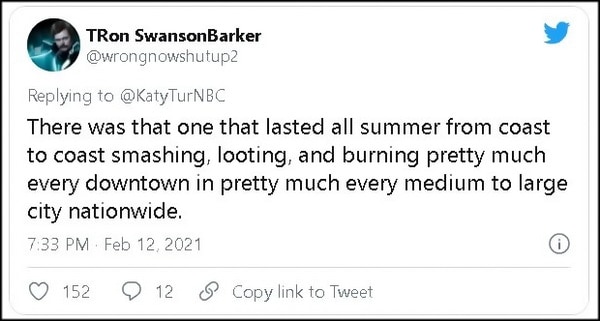 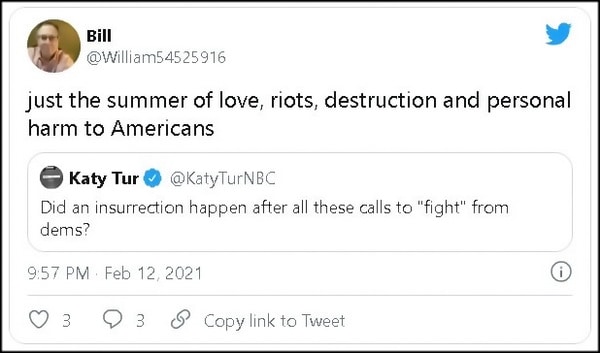 Just a reminder of past events where Democrats praised offices being taken over.

A long montage (8-minutes), but the key point is the first few minutes of the longer montage.

This video is from Larry’s YouTube Channel. At the end of his small montage I add video of a larger call to violence by [hypocritical] Democrats.

I use an excerpt of Matt Gaetz floor speech from the 6th (January 2021), and combine it with Dinesh D’Souza’s RUMBLE upload 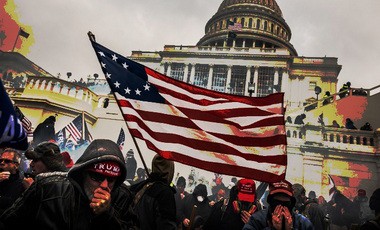 Newsmax host Rob Schmitt opened his show on Tuesday discussing the upcoming impeachment of private citizen Donald Trump. Schmitt also took time to mention the many irregularities, rule changes and fraud in the 2020 presidential election. Schmitt may be the only honest reporter left in America today.

Pipe bombs found near Capitol on Jan. 6 are believed to have been placed the night before. [RPT Note: planted at Democrats AND Republican offices]

One of the comments cited in the FBI memo declared Trump supporters should go to Washington and get “violent. Stop calling this a march, or rally, or a protest. Go there ready for war. We get our President or we die.” Some had been preparing for conflict for weeks.

In the week leading up to the rally and riot, Watkins and Caldwell were in regular contact as they talked about various groups of people meeting up on Jan. 5 and Jan. 6, according to an indictment filed this past week against them.

This was planned weeks ahead of time, the violent crowd had already entered the Capitol even before Trump was half-way through his speech:

Again, the pipe-bombs were placed at both Republican and Democrat sites, the DAY BEFORE:

Just to be clear, While I am posting a portion by RIGHT SCOOP, this is them sending people to the fuller article, to quote:

The bombs were placed the night before. The plans were made weeks in advance. The riot mob and Trump’s rally audience were different groups.

The incitement narrative is “falling apart before our very eyes,” says Kyle Becker in an outstanding new column at his substack.

On January 6th, amid a large gathering at the nation’s capitol to protest what millions of Americans perceived to be illegitimately held elections in key swing states, the former president gave a speech. The timing of the speech was the convening of the Joint Session of Congress to validate the slates of electors from the Electoral College.

It has been argued that Donald Trump’s language at the speech, including using the words “fight” was deliberately incendiary. But let’s take a look at the actual language of the speech. Trump deliberately says “fight” in the commonplace political context:

It should be noted further that allegations of election “fraud” are not incitement. Indeed, the same mainstream media accusing Trump of ‘inciting’ the crowd with fraud allegations accused Donald Trump himself of perpetrating fraud in the 2016 election.

Becker walks through several of the deceptive headlines that have poured out since January 6th (which is in fact its own form of incitement) and gets into the heart of it.

“For speech to meet the threshold of incitement, a speaker must, first, indicate a desire for violence and, second, demonstrate a capability or reasonable indication of capability to carry out the violence, according to Kevin Brock, former assistant director of intelligence for the FBI,” the report states.

It is quite obvious that the President of the United States, as Commander-in-Chief of the armed forces, and head of some of the most powerful intelligence agencies in the world, would not incite an “insurrection” or a “coup” from a mob of common political supporters and amateurish rabble like these fellows, who are suspiciously emblematic of the media’s warped reading of who is likely to be a Trump supporter:

After the U.S. Capitol riot, Democrats suddenly discovered law and order, and they no longer want to defund the police. But back during the Black Lives Matter riots throughout the summer of 2020, not so much. In this episode, Larry looks back at the comments made from the Democrats and the mainstream media, and how they served as cheerleaders for the rioters burning and looting in cities across America. Can you say… double standard?

A long montage (8-minutes), but the key point is the first few minutes of the longer montage. I have another montage of Democrats calling for violence here (RUMBLE)