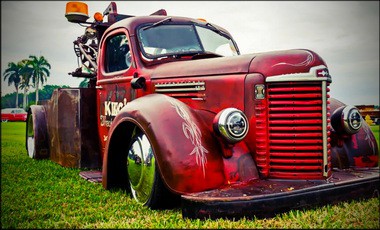 Met some awesome young believers todays on Main Street in Newhall. I was leaving Smokehouse on Main after my 2-beers and a chapter of reading in a book. They were out witnessing, which was awesome. They are Master’s College students… one young man was from Missouri, the other was a So-Cal dude, and the gal was from Costa Rica. Her English was flawless… but it dawned on me later that her parents are probably missionaries. At ANY RATE, I am reposting this encounter I had from Grace Community to our Valley.

(My Facebook descriptor) The tow-truck driver I hitched a ride with today was probably surprised at the level of conversation in a reasonable and rational way. I enjoyed the challenges, and I am sure Charlie did as well. topics of discussion I engaged:

While driving the 5am delivery around, the work van started to give me an “Overheating” warning. I finished my 2-remaining drops and headed back to the shop… but the van would have nothing of it. So I nursed it into Grace Community Church’s parking lot and the office called for a tow truck – which took a little over an hour-and-a-half (they were busy). One of the security guards came out to check on me and I asked him if I could use the restroom. He said yes. I told him I had to retrieve my mask, he mentioned no masks were mandated to wear, that I could if I wished. I chose to support the Church’s “gravitas” and went in mask-less. Awesome. I love Grace. As I was walking around to hit the head, the security guard witnessed to me… I thought that was more awesomer.

So when the tow truck service guy (Charlie, a nice guy) had me loaded up and we were driving out, he asked what the place was I was sitting at. I explained it was a church, one of the better ones. I mentioned a couple more things about it, and then Charlie started to criticize the Christian Faith (mainly Catholicism at first), speaking of greed, how the people say all good things come from God but then when something bad happens like an accident – we are to blame, how rich the Catholic Church is, and all the wars religion started, and how people who believe in an afterlife make the world worse.

(This is a general recalling of our conversation)

I mentioned to him that I cannot speak to his points regarding the Vatican, as, I am not Catholic. But I did choose to address a couple of his broader points. (I had to break into his speaking about one topic and then going to another.)

The first point I made is that the Bible does not promise your life to be “good,” and harm free. On the Contrary, the Bible – from Genesis to Revelations documents man’s fallen nature and that from Genesis to Revelation that mankind needs a savior… someone to step into the place of wretched humanity to save it. I said, we need saving, not comfort.

I also mentioned that Nietzsche said that the death of God in the 19th century would all but guarantee the bloodiest 20th century. I then noted in conversation that this prediction came true… telling Charlie that in less than 100 years, non-God movements in Communism and Marxism through Stalin, Mao, Pol-Pot, Hitler, and others, killed more people than ALL religions previous to the 20th century.

He broke in and said this wasn’t true, and I could tell his language barrier with me was frustrating him. So I jumped in when I had a chance and mentioned that two encyclopedia sets went through 10,000 years of warfare and categorized the reasons for these wars. I mentioned these encyclopedia sets by name: Encyclopedia of Wars, 3 volumes – and — The Encyclopedia of War, 5 Volumes. I told him that only 7% of all wars were religious, and that if you took out Islamic wars, all other religions cause about 3% of the wars in a 10,000 year period.

DATA POINTS FOR THE READER:

I then mentioned to him a study (I was wrong about the source, I thought Stanford — it was actually done by a University of Oregon psychologist) that found that a country’s belief in heaven and hell is related to its crime rates, and that a belief in a punitive God equals less crime. So belief in a God where our actions can be morally judged make a better society.

Charlie broke into discussion about Halloween for some reason, wanting a response about why people dress up in costumes. I said I do not know much beyond that it is a Pagan holiday of sorts, and that the Church wanted to evangelize these Pagans and so stuck a holiday close to it – All Saints Eve. (I may be wrong, but what Charlie then followed up with I knew was wrong. He said that the Church killing people had a connection to it.

I said I don’t think that is the case, mentioning the Druids and Irish Paganism being more connected to the issue than anything.*

He again brought up the Vatican, and I again noted I am not Catholic, and that the church I went to spent a lion’s share of their funds on missionaries around the world in tough places (Africa, Middle-East, and even one couple that would try to sneak across the border to North Korea at times), as well as having a large outreach to the poorer Hispanic area of the church’s influence.

We were at our destination finally (the shop that fixes our work truck and van.) I said, “Charlie, remember two things from this conversation. You were wrong, historically about religion and wars, as well as ‘religious’ people making the world worse. I ask you to remember these two examples because they are great examples of how you approach the Christian Faith: with bad facts and evidence. Try to approach these topics from a better starting point and you won’t be disappointed with the outcome.”

At that, we went our separate ways. After some paperwork of course. I did finish with “Charlie, I had a pleasure discussing this with you.” But in the back of my mind, I really was thinking:

There’s no one explanation for how Halloween costumes originated. Much like the holiday itself, the practice of dressing up is the result of a hodgepodge of traditions from around the world.

Many historians suspect that the tradition has some basis in the Celtic festival of Samhain (also called Calan Gaeaf in Wales). Celebrated between the autumn equinox and the winter solstice, Samhain marks the official start of winter—known to the Celts as the “dark season.” During Samhain, “the world of the gods was believed to be made visible to humankind,” according to the Encyclopedia Britannica.

That wasn’t a comfort to the ancient Celts, who believed their deities were prone to playing tricks on human worshippers. Many festival participants disguised themselves as animals or beasts, hoping to hide from malevolent spirits who might bring them misfortune.

Move forward a few centuries and the modern-day practice of dressing up and trick-or-treating has its roots in the European custom of “mumming and guising.” Mummers would dress up in costumes, often woven from straw, and perform plays and songs for neighbors in exchange for food. Scottish and Irish immigrants brought that tradition to North America, where it later morphed into what we now know as trick-or-treating.

Halloween costumes didn’t experience their true heyday until the mid-1900s, though. For that, you can thank New York City entrepreneurs Ben and Nat Cooper, who started a company producing pop culture-themed costumes at a low cost. Ben Cooper, Inc., found a niche in helping kids become the characters they admired from television and comic books, often purchasing merchandising rights before said characters ever became popular. Due in no small part to the Cooper family’s innovation, Halloween costumes became an accessible and even necessary part of holiday festivities…..