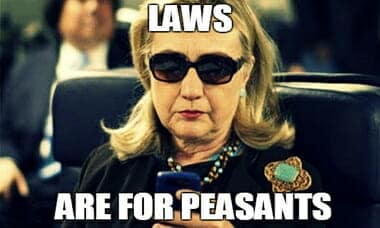 With the recent no-show of the guy who set-up Hillary’s server, and the pleading of the fifth by her people… the pressure is back on Comey and what they hell he even does at the FBI.

FBI Comey testifies again as a result of the recent document releases from the FBI. He appears much more defensive than I have ever seen him before. Ratcliffe is brutal. Issa catches Comey in a lie about the immunity agreements. Jordan, Chaffetz, and Gowdy once again just can’t believe how an indictment wasn’t warranted.

What I find interesting is the fact that the FBI is not saying who at the FBI is authorizing the release of the documents, but then Comey gets raked over the coals again. Why is the FBI even leaking these documents when they know it is going to further discredit them. Something just doesn’t make sense. There must be something significant going on behind the scenes. Like I said before, it appears that Hillary is being thrown under the bus.

The hearing was about 4 hours. They used the usually 5min rule back and forth across party lines. I edited down to 22min picking what I thought was the most relevant testimony from the usual dynamic characters. Ratcliffe was a surprise. Don’t know much about him, but he was fun to watch!

Gateway Pundit astutely mentioned the truth in the matter, as, you can see the narrative immediately above and below set by liberals:

The House Oversight and Government Reform Committee held a hearing today on Barack Obama’s unprecedented attack on religious freedom. Democrats invited the notorious Christian-hater Barry Lynn to represent them. Then they withdrew his invitation. And, then they stormed out of the committee hearing hoping to deflect all of the media’s attention away from Barack Obama’s assault on religious organizations.

Think Progress predictably reported that the Republicans would not allow any females on the panel. Not true. Rep. Darrell Issa (R_CA) the committee’s chairman explained to Greta Van Susteren On The Record tonight that the minority party historically is allowed one panelist at a typical hearing. The democrats picked Christian-hater Barry Lynn. Then they switched and chose a young woman to come in and talk about birth control. That was not the topic of the hearing so Issa told democrats they could not bring her in to represent them. Then they walked out. It was all planned.

Of course, the state-run media will never report these important facts.

After the hearing started democrats still tried to disrupt the proceedings and turn it into a sideshow. They were determined to hide from the American people their disdain for religious freedom.

Just a few years ago this narrative may have been embedded in the psyche of the general public, but the new media (sites like these) and Fox News, can correct the leftist media in their attempt to create a story: