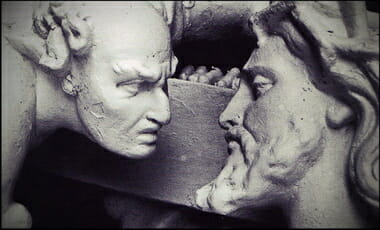 There are three notable perspectives:

Here is a look at the non-Biblical version of this view that Jesus descended into hell:

(Word on the Word Faith)

(Word on the Word Faith h-t for the above videos)

The main issue with this false doctrine is that it renders the work on the cross null… here is a good clip of Mark Driscoll explaining the issue well. (This was a clip from Mark’s sermon, “Suffering to Learn – 1 Peter 3:17-22“):

Here as well is a quick confrontation by WATCHMAN explaining the core of the deviation,

…Another is the distortion of what Jesus meant on the cross when He said, “It is finished” (John 19:30).

The teachers of this movement emphasize the “spiritual” death of Christ almost to the exclusion of His “physical” death. The problem with this is simply that it is unbiblical. The Bible’s emphasis is on the physical death of Christ, not the spiritual. The teaching of scripture is: “Without shedding of blood (physical) is no remission” (Hebrews 9:22, parenthesis mine).

As regarding Christ’s words, “It is finished”, the word in the Greek is tetelistai and is rendered “to bring to an end” or “paid for in full” (Vine’s Expository Dictionary). What Christ was saying was that the work of redemption (paying for sin and securing salvation) was complete. If Christ did anything else beyond “It is finished,” in order to pay for sin, something is added to His completed work. This is what the Word-Faith teachers have done when they teach that salvation was completed in hell, after Christ died on the cross!…

For a dealing with Joel Osteen’s view, see a post entitled, “Joel Osteen’s False Teaching That Jesus went to Hell, by Lori Eldridge.” The implications of this false view of “It Is Finished” is noted by Matt Slick of CARM:

Every man-made religion and each of their faithful adherents stand, right now, in the cross-hairs of God’s wrath. “For he whom God has sent utters the words of God, for he gives the Spirit without measure. The Father loves the Son and has given all things into his hand. Whoever believes in the Son has eternal life; whoever does not obey the Son shall not see life, but the wrath of God remains on him” (John 3:34-36).

But the implications of Jesus’ words on the cross extend beyond false religions and into American Evangelicalism.

Some churches deny the efficacy of Jesus’ finished work on the cross by spending time and resources wooing the unsaved to the “Christian Club” instead of calling them to repentance and faith in the Lord Jesus Christ. Oh, how many times I have heard the testimonies of professing Christians–testimonies that culminate with happy membership at a church and not with the bending of the knee, in repentance and by faith, at the foot of the cross.

Some churches deny the efficacy of Jesus’ finished work on the cross, diminishing the gospel as the power of God for salvation, by insisting Jesus and the gospel need the help of man’s innovation and perceived ability to make the gospel more palatable. This is demonstrated through gimmicks, sales pitches, bait and switch tactics, and playing to the primal desires of health, wealth, prosperity, ease, comfort, and happiness without accountability.

Some churches deny the efficacy of Jesus’ finished work on the cross by teaching unbiblical mantras such as:

Some churches deny the efficacy of Jesus’ finished work on the cross by failing to distinguish service, helps, and hospitality from evangelism, which is the actual and literal presentation of the gospel of Jesus Christ to those who are lost and bound for Hell.

A person on my YouTube pointed something out…. and it is this: that there are orthodox views about this “visit” to hell. Period. Here is his comment:

HANK HANEGRAAFF reigns is the idea to allow for Biblical views rather than just one narrow view: