Which was more anti-Semitic: Corn’s comment or Matthews’ laughter afterwards?

NewsBusters has this story:

The Daily Beast contributor who once insisted that there’s “no such thing as sharia law” is at it again, dismissing the threat of radical Islam presented by the political instability in Egypt.

In a January 30 post at Washington Post/Newsweek’s “On Faith” feature yesterday, Reza Aslan dismissed fears that the Muslim Brotherhood is a radical group that could take Egypt in a theocratic direction should strongman Hosni Mubarak be forcibly ousted from power, even though members of the Brotherhood have expressed admiration for Osama bin Laden.

GOP presidential hopeful Rick Santorum is already drawing parallels between the young protesters calling for an end to the brutal and repressive Mubarak regime, and the popular protests that, three decades ago, brought down another despicable dictator and former American ally, the Shah of Iran. “We abandoned [the Shah] and what we got in exchange was… a radical Islamist regime,” Santorum said. Mike Huckabee, another GOP presidential hopeful, joined in the hysteria, warning Americans that, “if in fact the Muslim Brotherhood is underneath much of the unrest [in Egypt] every person who breathes ought to be concerned.”

[H]owever the current uprising in Egypt turns out, there can be no doubt that the Muslim Brotherhood will have a significant role to play in post-Mubarak Egypt. And that is good thing.

Despite the wide array of political and religious views on display on the streets of Cairo, Giza, Alexandria, and Suez, the one thing about which the overwhelming majority of Egyptians agree – 95 percent according to a 2010 Pew Research Center poll – is that Islam should play a role in the country’s politics. At the same time, a similar Pew poll taken in 2006 found that while the majority of the Western public thought democracy was “a Western way of doing things that would not work in most Muslim countries,” pluralities or majorities in every single Muslim-majority country surveyed flatly rejected that argument and called for democracy to be immediately established, without conditions, in their own societies.

For Huckabee and Santorum, as well as for a large segment of the American public, these two polls present a contradiction. How could Egyptians want both a democracy and a role for religion in their government? After all, in the United States it is axiomatic that Islam is inherently opposed to democracy and that Muslims are incapable of reconciling democratic and Islamic values. Never mind that the same people who scoff at the notion that religion could play no role in the emerging democracies in the Middle East are the same people who demand that religion must play a role in America’s democracy. Ironically, one of the most vocal proponent of religious activism in politics is Mike Huckabee himself, who has repeatedly called Americans to “take this nation back for Christ” and who, while running for president, proudly declared that “what we need to do is to amend the Constitution so it’s in God’s standards.”

In fact, when it comes to the role of religion in society, Americans and Egyptians are pretty well in agreement. An August 2010 Pew poll found that 43 percent of Americans believe that churches should express political views and play an active role in politics, while 61 percent agreed that “it is important that members of Congress have strong religious beliefs.”

There is no doubt that giving religiously inclined organizations and politicians a seat at the political table poses risks. And certainly, problems can arise when religion becomes entangled with the state, as those who recall the Bush administration’s evangelistic foreign policy can attest. Nevertheless, since a state can be considered democratic only insofar as it reflects its society, if the society is founded upon a particular set of values, then must not its government be also?

Of course Aslan (different from CS Lewis’ Azlan) is a radical in disguise. For instance, Jihad Watch has this story of Prof. Aslan calling Ahmadinejad a “liberal reformer.” I have posted on UC Irvine in the past, and since then the Muslim Student Union was suspended for their blatant antisemitism. Below is another event that went wrong at UC Irvine:

“We are owned by propagandists against the Arabs. There’s no question about that. Congress, the White House, and Hollywood, Wall Street, are owned by the Zionists. No question in my opinion. They put their money where there mouth is…We’re being pushed into a wrong direction in every way.”

Thomas went on to malign a man that has worked for five of the last six presidents:

“Obama, he puts in charge for the Arab world a Zionist like Dennis Ross…You don’t put a Zionist in charge of the Muslim world in the White House.” “In a true peace it is impossible that a purely Jewish state of Palestine can endure,” Rauf wrote. “In a true peace, Israel will, in our lifetimes, become one more Arab country, with a Jewish minority.” (Pictures… Weep With These Wonderful People…

They Are Models For The Patience & Compassion of God)

A Palestinian shot up a car, then drug the four people out of the car and shot them a couple more times to make sure the deed was done.. One of the victims was a mother of six, pregnant with her seventh. What happened next? Palestinians danced in the street passing out sweets.

http://AmericasNewsToday.Com/ Todd Gaziano (Congressional appointee on the United States Commission on Civil Rights) explains how the 2008 Election Day voter intimidation charge against the Philadelphia New Black Panther Party was “open and shut”, and how U.S. Assistant Attorney General Deputy Julie Fernandes ordered to “never bring another lawsuit against a black or other national minority… no matter what they do.”

Part of the reason that this disconnect may be happening is because the people in the Obama Admin (including Obama himself) are so virulently left/progressive, that they view the white man as wrong/evil all the time. The magazine cover below is from the church that Obama attended for twenty years. That racist man on the cover was on the cover a total of three times. He received a life-time achievement award from Obama’s pastor. Maybe it wasd for being taken up on a UFO and told he was the messiah?

I have written on some of these issues before:

Unlike Obama, I’m Proud of my White Momma!

Rev. Jeremiah Wright says “Them Jews” are keeping him from President Obama 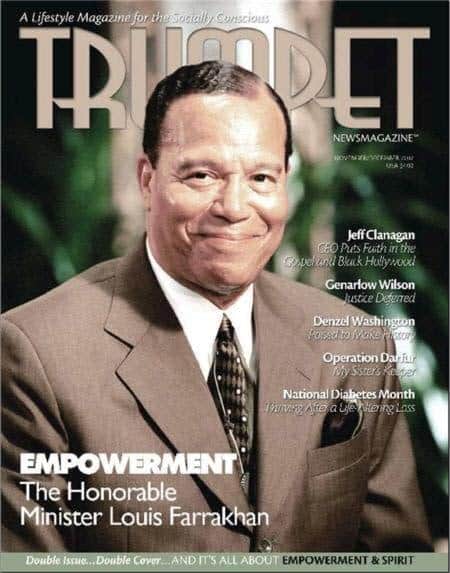 This is from Obama and God Blessed Racism – Remember, these Black Nationalists Liberation Theology books were sold in Obama’s church the entire time he went there.

The personification of the devil as the symbol of all evil assumes the living shape of the Jew.

The [Nazi party] should not become a constable of public opinion, but must dominate it. It must not become a servant of the masses, but their master!

Obamacon – Twenty Years In A Racist Church from Papa Giorgio on Vimeo.

After the almost racist comment by the Democrat, Leslie Marshall, in this back-and-forth, I felt moved to post this recent book by Norman Podhoretz:

Solomonia has an interesting story up. This is one of those head-waggers.

Five activists who caused £180,000 damage to an arms factory were acquitted after they argued they were seeking to prevent Israeli war crimes.

The five were jubilant after a jury found them not guilty of conspiring to cause criminal damage to the factory on the outskirts of Brighton.

The five admitted they had broken in and sabotaged the factory, but argued they were legally justified in doing so.

They believed that EDO MBM, the firm that owns the factory, was breaking export regulations by manufacturing and selling to the Israelis military equipment which would be used in the occupied territories. They wanted to slow down the manufacture of these components, and impede what they believed were war crimes being committed by Israel against the Palestinians….

…Oh, well, since they exhausted all “democratic paths” then I suppose they had only one method left to get their way: violent fascism….

…Yisrael Medad has more on the rather unsurprising background of the judge (he was born in Jaffa). And be sure to read Elder: More on the British judge who hates Israel (Zvi) and Melanie Phillips: Hell on earth is a court in Hove.

Related, at Israel Matzav: Why did the Bobbies take so long to show up? Israeli goods destroyed at TESCO in Wales

This cartoon, from a 1956 Swiss magazine, has been floating around for awhile. Thought it was worth posting again. Not much has changed: