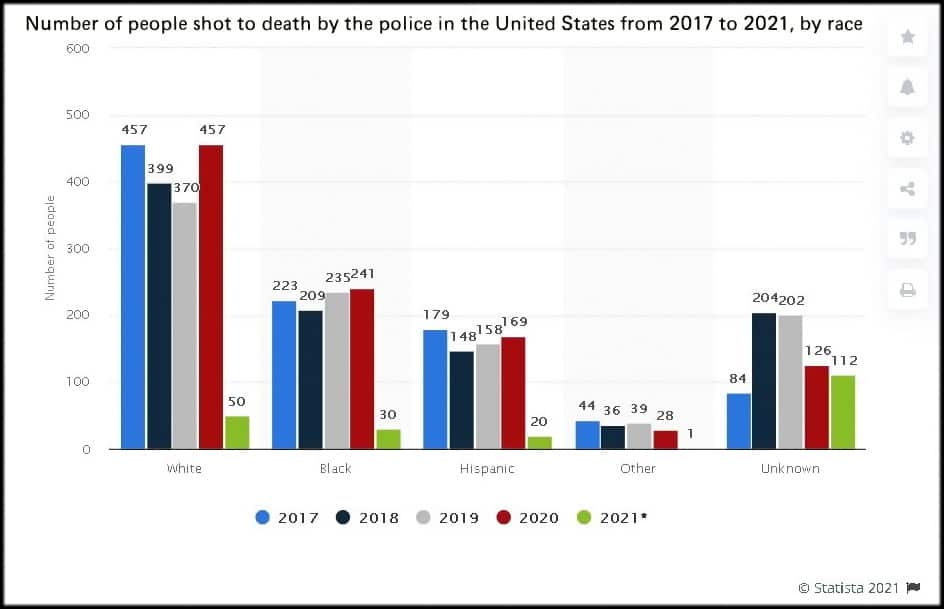 Even if you allow the higher numbers — In 2020, the police fatally shot 18 allegedly unarmed blacks [24 whites] (unarmed being defined extremely loosely to include suspects grabbing an officer’s gun or fleeing in a car with a loaded pistol on the seat) — that represents 0.2 percent of all blacks who died of homicide in 2020, and an infinitesimal percentage of the 40 million blacks in the U.S. If the police ended all fatal shootings tomorrow, it would have a negligible effect on the black death-by-homicide rate, which is 13 times higher than the white death-by-homicide rate for decedents between the ages of ten and 43.

Want More Evidence That Police Are Racist Towards Whites?

According to the Centers for Disease Control and Prevention, police killings of blacks declined almost 80% from the late ’60s through the 2010s, while police killings of whites have flatlined. A police officer is 18.5 times more likely to be killed by a black male than an unarmed black male is to be killed by a police officer.” Last year, according to The Washington Post, the police killed nine unarmed blacks. They killed 19 unarmed whites. In recent years, about 50 cops have been shot and killed annually in the line of duty. So, more cops are killed each year than are unarmed black suspects.

And yet they mow down white people!

The youngest black professor ever to receive tenure at Harvard and recipient of an economics prize for “most promising American economist under 40” has just upended the conventional wisdom on police shootings.

There is no racial bias when officers fire on suspects, according to a new study by Prof. Roland Fryer – black suspects are actually less likely to be shot than other suspects.

The study looked at more than a thousand shootings in 10 major police departments, The New York Times reports. Fryer and student researchers spent 3,000 hours putting together data from police reports in Houston, Austin, Dallas and Los Angeles, as well as Orlando, Jacksonville and four other Florida counties.

In officer-involved shootings in these cities, officers were more likely to fire their weapons without having first been attacked when the suspects were white. Black and white civilians involved in police shootings were equally likely to have been carrying a weapon. Both of these results undercut the idea that the police wield lethal force with racial bias.

in tense situations, officers in Houston were about 20 percent less likely to shoot a suspect if the suspect was black. This estimate was not very precise, and firmer conclusions would require more data. But, in a variety of models that controlled for different factors and used different definitions of tense situations, Mr. Fryer found that blacks were either less likely to be shot or there was no difference between blacks and whites.

And yet, they shoot whites more than blacks.

Obviously I do not think police are “racist” in any systematic way. But that isn’t the point in this post.