I just wanted to share a couple posts about polls, the first is via POWERLINE:

It is an odd election season. Pretty much everyone thinks the Democrats are on their way to a crushing victory, yet it is hard to see why. A whopping 56% of Americans say they are better off now than they were four years ago, and President Trump draws large, enthusiastic crowds wherever he goes. Meanwhile, Joe Biden is a pale shell of his formerly buffoonish self. When Joe is able to get out of bed, his campaign schedules intimate invitation-only events. Supposedly this is because of COVID, but everyone knows it is really because he doesn’t want to be embarrassed by his inability to draw a crowd. Probably no one outside of Biden’s immediate family particularly wants him to be president.

So what is going on? One possibility is that the conventional wisdom is wrong. At TOWNHALL, Kevin McCullough, who has a pretty good record as an election forecaster, argues that we should believe our lying eyes:

To be exceedingly clear — I find no evidence of a Biden win outside of the media polls.

The candidates already know that the president is winning by a mile. President Trump can’t help but to continue to draw massive crowds (even while in the hospital.) Every weekend, in every state, in hundreds of cities bikers, truckers, boaters, horse and buggy people, and regular pedestrians are having larger and larger participation in various parades of support from Miami to Manhattan and from Beverly Hills to Capitol Hill. Meanwhile Biden has trouble getting more than a dozen to show up at a tour stop in Yuma. And we all know people who say “I didn’t vote for him then,” or “I wasn’t really sure about him in 2016,” who have converted to “I’ll crawl over broken glass to vote for him now.”

We can dream. Finally, here is McCullough’s predicted electoral map (the first graphic is his most updated prediction): 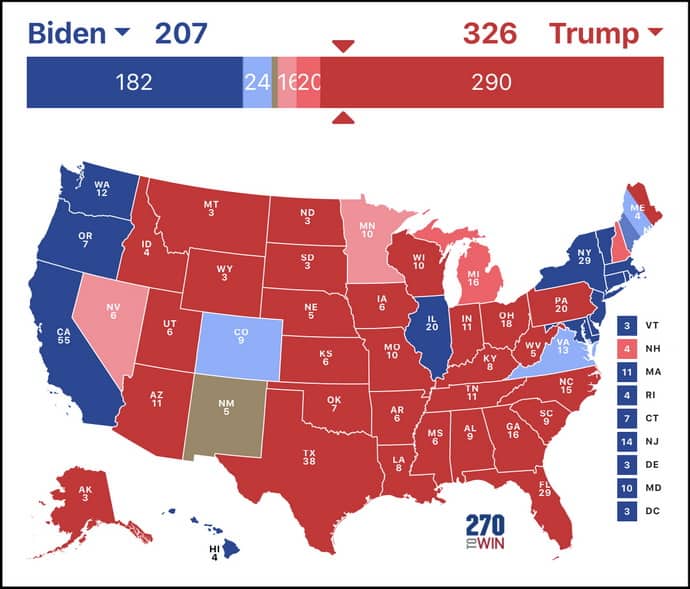 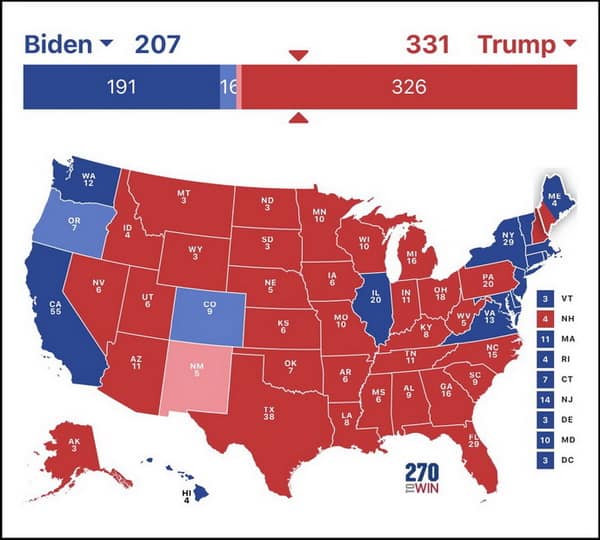 Not to pour cold water on a much-needed bit of optimism, but McCullough has Minnesota going for Trump. But it has been reported here that the Trump campaign has pulled all of its remaining television ads from Minnesota stations.

Still, we can dream.

Remember, Kevin McCullough called the map dead on in 2016. Okay, the next is from RED STATE

Mainstream media have been trumpeting a lot of the polls being for Joe Biden.

We’ve pointed out the problems of some of those polls and how there are the other polls, like the Democracy Institute poll, that find President Donald Trump ahead because they’re measuring likely voters not registered voters and they aren’t oversampling Democrats. Most are also not measuring things like the shy Trump voter or that the youth vote is again unlikely to come out in greater numbers.

But what’s missing in a lot of the discourse is that the measures apart from MSM national polls by which you judge whether a president will be reelected are all for Trump.

First there’s no indication of a youth voter surge, that’s bad for the Democrats who poll much higher with the young than other age groups.

As I already wrote about, Trump has a 51% approval rating from Zogby.

Gallup has found whenever the incumbent has over 50%, he’s reelected.

Gallup also found that 56% Americans thought they were better off now than four years ago under Barack Obama and Joe Biden. A reporter asked Joe Biden about that, he got snippy and said that if people thought that they didn’t have to vote for him and that their memories were somehow wrong. 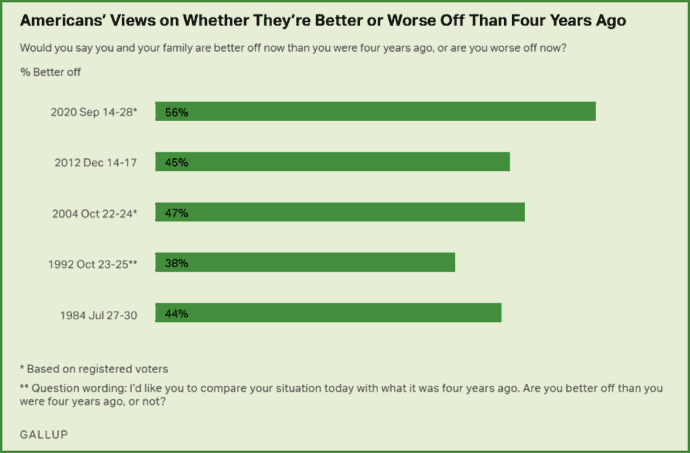 David Chapman did a great Twitter thread of some of the other historical measures.

Oh, and it gets better.

“Three times in history America has faced a pandemic, recession, and civil unrest during an election year. The incumbent party is 3-0 in those elections,”

This tallies with the Helmut Norpoth prediction model that cites the importance of the primary numbers and also predicts a Trump win. People came out in droves for Trump in the primary when they didn’t even have to.