I combine (stitch together) two topics that are related to each other. That is, how the media distorts and covers up important issues by actively censoring topics… bias by omission. This bias is also seen in how the media and academia have characterized our nation for decades — as well as Donald Trump for over 4-years. If our nation if systemically racist and Donald Trump is a white supremacist “nazi,” why should minorities feel safe regarding government activity. (Which is what the Left wants, victims made through fear are easier to control.) The MSM drives the narrative for the lazy. 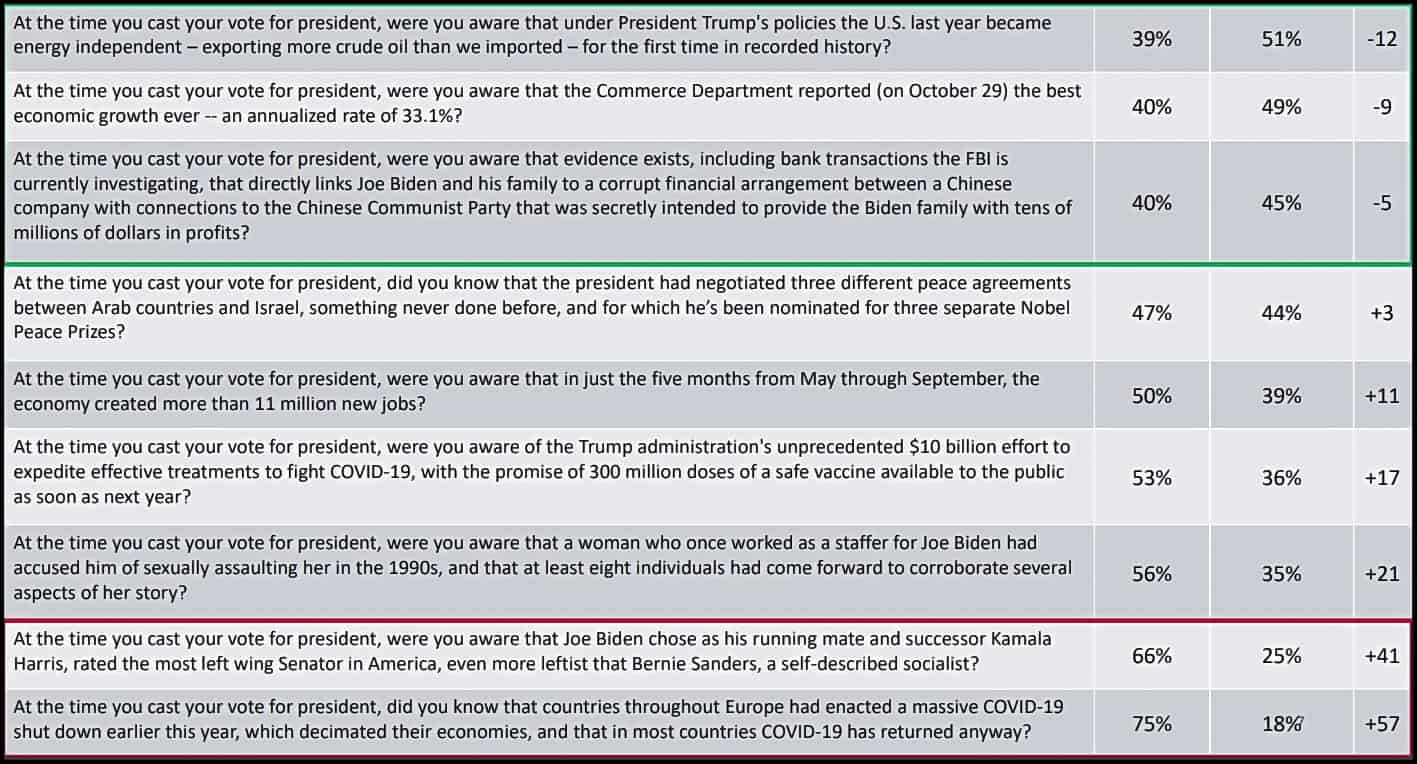 …For the post-election survey, The Polling Company interviewed 1,750 Biden voters in seven swing states: Arizona, Georgia, Michigan, Nevada, North Carolina, Pennsylvania and Wisconsin, six of which (excluding North Carolina) were called for Biden. The voters were asked about their knowledge of eight news stories, all of which the liberal media had downplayed or censored.

The survey showed “a huge majority (82%) of Biden voters were unaware of at least one of these key items, with five percent saying they were unaware of all eight of the issues we tested,” reported the MRC.

For instance, despite the #MeToo movement and the media coverage it garnered, the survey found that 35.4% of Biden voters were unaware of the serious allegations of sexual assault made by Tara Reade against Joe Biden. Reade had worked for Biden in the 1990s.

“If they had known about Tara Reade’s sexual assault allegations, 8.9% told us they would have changed their vote — either switching to Trump or a 3rd party candidate, not voting for any presidential candidate, or not voting at all,” said the MRC.

“By itself, this would have flipped all six of the swing states won by Biden (Arizona, Georgia, Michigan, Nevada, Pennsylvania and Wisconsin), giving the president a win with 311 electoral college votes,” said the organization.

Another important story buried by the major media was the Hunter Biden laptop story, which showed that Joe Biden was aware of his son’s business dealings in the Ukraine and in Communist China.

Yet 45.1% of Biden voters said they were unaware of the laptop story.

“According to our poll, full awareness of the Hunter Biden scandal would have led 9.4% of Biden voters to abandon the Democratic candidate, flipping all six of the swing states he won to Trump, giving the President 311 electoral votes,” reported the MRC.

“Looking at all eight of these issues together, our poll found that a total of 17% of Biden’s voters told us they would have changed their vote if they had been aware of one or more of these important stories,” reported the MRC.

“This would have moved every one of the swing states into Trump’s column, some by a huge margin,” said the MRC. “The President would have trounced Biden in the electoral college, 311 to 227.”

The MRC noted that the Biden voters who said they would have voted differently had they been properly informed by the media, did not have to vote for Trump for the president to have won a second term.

“Just by choosing to abandon Biden, these voters would have handed all six of these states, and a second term, to the President — if the news media had properly informed them about the two candidates,” said the MRC. (Emphasis added.)