Jesse Watters: “Can you guess who’s running these places? Democrats. Democrats want to disarm you during the crime wave they created”

The following photographs illustrate the point. Here is a pre-“ban” AR-15. On the end of its barrel is a two-inch-long attachment that reduces smoke and flash, and underneath its A-frame front sight is another attachment called a bayonet lug.

….Setting aside the question of what an “assault weapon” is, Biden’s claim has been fact-checked by the Washington Post — hardly a conservative outlet — and found to be lacking.

The Post fact-checked the statement, “When we passed the assault weapons ban, mass shootings went down. When the law expired, mass shootings tripled.” The Post reported:

Biden claimed that mass shooting deaths tripled after the law expired. He appears to be relying on a study of mass shooting data from 1981 to 2017, published in 2019 in the Journal of Trauma and Acute Care Surgery by a team led by Charles DiMaggio, a professor of surgery at New York University’s Langone Medical Center. That group found that an assault weapons ban would have prevented 314 out of 448, or 70 percent, of the mass shooting deaths during the years when the ban was not in effect. But the data used in that study has come under attack by some analysts.

Earlier, the Post gave “Three Pinocchios” to the claim that the end of the assault weapons ban led to a rise in mass shootings. It has since revised that conclusion, given new data. “The body of research now increasingly suggests the 1994 law was effective in reducing mass-shooting deaths,” the Post concluded. Still, it left the claim “unrated,” because the evidence is inconclusive.

The claim mass shootings “tripled” after the end of the ban is based on one study, and is speculative at best…..

Here is FACT CHECK .ORG for one example:

….President Joe Biden claims the 10-year assault weapons ban that he helped shepherd through the Senate as part of the 1994 crime bill “brought down these mass killings.” But the raw numbers, when adjusted for population and other factors, aren’t so clear on that.

There is, however, growing evidence that bans on large-capacity magazines, in particular, might reduce the number of those killed and injured in mass public shootings.

A day after the Boulder, Colorado, mass shooting, in which 10 people were killed by a gunman in a grocery store on March 22, Biden spoke in support of two House-approved bills that would expand background checks to include private sales. Biden also returned to another campaign promise on gun control: to ban assault weapons and high-capacity magazines.

“We can ban assault weapons and high-capacity magazines in this country, once again,” Biden said. “I got that done when I was a senator. It passed. It was a law for the longest time and it brought down these mass killings. We should do it again.”

Biden is referring to his work as chairman of the Senate Judiciary Committee when he sponsored and largely shepherded the Violent Crime Control and Law Enforcement Act into law in 1994. That law, among other things, included an “assault weapons” ban, which prohibited the sale of certain semiautomatic firearms and large-capacity magazines that could accommodate 10 rounds or more. (Existing weapons on the banned list were “grandfathered,” meaning people could keep them.) A sunset provision, however, meant that the ban expired in 10 years, in 2004.

We wrote about this issue eight years ago, when the gun debate was again raging in Congress. At the time, we found that a three-part study funded by the Department of Justice concluded that the ban’s success in reducing crimes committed with banned guns was “mixed.”

FactCheck.org, Feb. 1, 2013: The final report concluded the ban’s success in reducing crimes committed with banned guns was “mixed.” Gun crimes involving assault weapons declined. However, that decline was “offset throughout at least the late 1990s by steady or rising use of other guns equipped with [large-capacity magazines].”

Ultimately, the research concluded that it was “premature to make definitive assessments of the ban’s impact on gun crime,” largely because the law’s grandfathering of millions of pre-ban assault weapons and large-capacity magazines “ensured that the effects of the law would occur only gradually” and were “still unfolding” when the ban expired in 2004.

Some things haven’t changed much since then. A RAND review of gun studies, updated in 2020, concluded there is “inconclusive evidence for the effect of assault weapon bans on mass shootings.”

“We don’t think there are great studies available yet to state the effectiveness of assault weapons bans,” Andrew Morral, a RAND senior behavioral scientist who led the project, told FactCheck.org in a phone interview. “That’s not to say they aren’t effective. The research we reviewed doesn’t provide compelling evidence one way or the other.”…..

MORE LIES THE MSM FEEDS US

Here are the three big TRUTHS the left is lying about.

Only 15 of the 67 events involved an “AR patterned” firearm; they are used in less than 22% of mass shootings. Only 22% of all mass shooting used AR style rifles.

…..For the sake of this investigation, we used the definition put forth by the Congressional Research Service. The CRS’s website explains that it “works exclusively for the United States congress, providing policy and legal analysis to committees and members of both members of the house and senate, regardless of party affiliation.” The website further explains that the CRS is a “shared staff to congressional committees and members of congress. CRS experts assist at every stage of the legislative process.”

Finally we come to the Congressional Research Service’s definition: “The incident takes place in a public area involving four or more deaths—not including the gunman, the shooter selects victims indiscriminately, the violence in these incidents are not a means to an end.” It should be noted that CRS breaks up shootings involving four or more individuals as public, familial, and felony (robbery, gang activity, etc). This is because the motives behind each vary greatly.

To put it simply, congress uses the CRS’s research to develop policy and create laws.

Now that we’re “armed” with the facts we need, lets dissect the statistics being pushed by the media.

The stats used in the news sources cited above stating there have been 307 mass shootings thus far in 2018 are from the Gun Violence Archive. Okay, let’s look a little deeper into the GVA. The mission statement on their website states it is a “non-profit corporation formed in 2013 to provide free online public access to accurate information about gun related violence in the United States.”

We dug into the website’s “mass shooting” report for 2018. We filtered the list by lowest deaths to highest. Immediately 11 out of the 13 pages were disqualified, as there were between 0 and 3 deaths per incident. That means right away, 287 incidents out of 307 do not qualify as a mass shooting by definition. In fact, 155 of these incidents resulted in zero deaths. This is unbelievable.

That leaves only two pages to dig through. The most common theme with the remaining list of incidents is that they were primarily either family or domestic violence related. Using the definition used by the CRS, that removes all but six shootings that actually count as a public mass shooting. Yes folks, there have only been SIX mass shootings this year in the United States – not 307.

Here are the six qualifying incidents:

Six mass shootings compared to 307 is a substantial difference. The media easily plays off the ignorance of the public, taking advantage of the fact that there is not a universal definition of “mass shooting”, and blowing up an issue that, although very tragic, is only part of a larger picture of violent crime, most of which does not involve firearms…..

And a noteworthy TWITTER THREAD discussing the idea that the United States leads the world in gun violence: 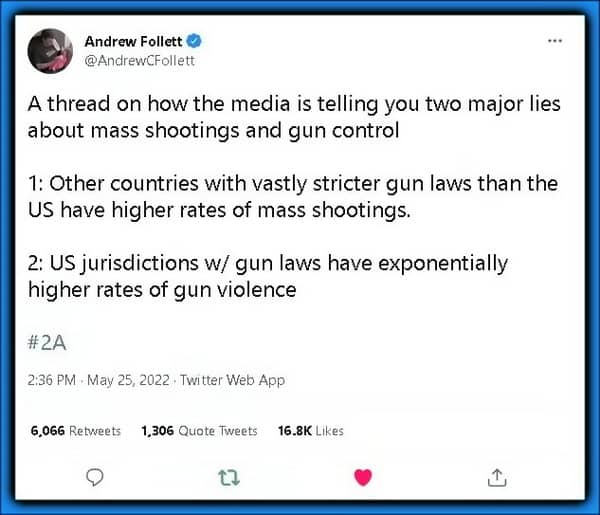 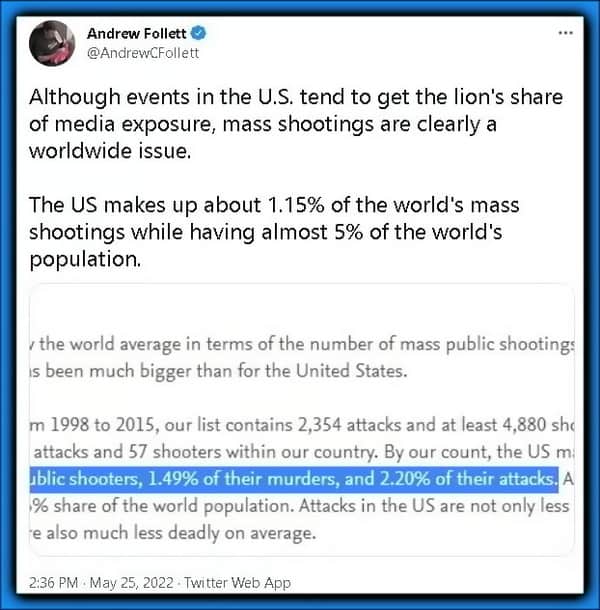 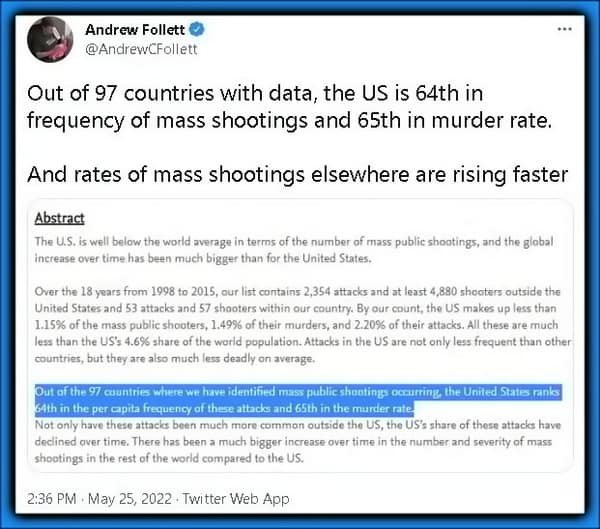 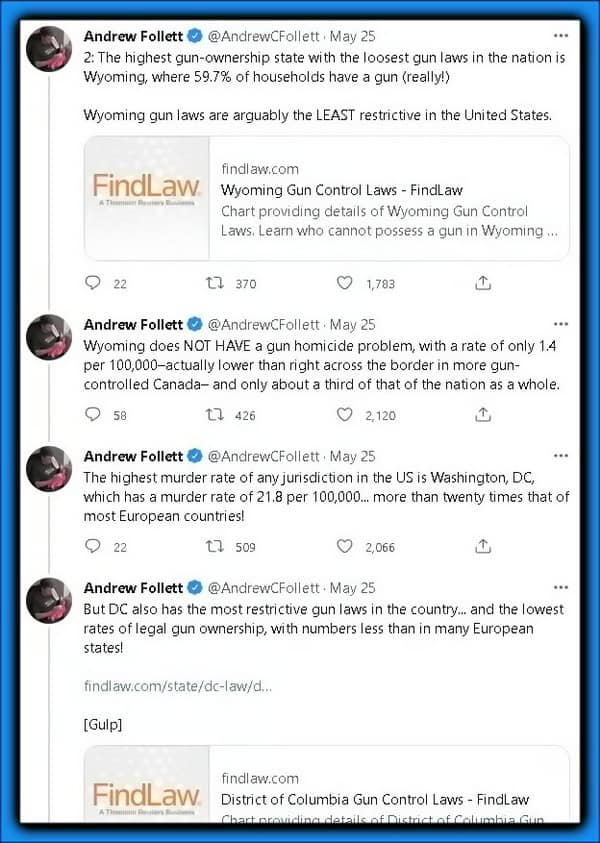