This is connected to an older post titled, “Inconvenient Truths for FactCheck.org” which should also be part of a 2014 Christmas discussion titled, “Polar Bear Fraud ~ Highest Levels Eva!“

Via the Daily Mail:

“Numbers are so high that Inuit leaders have been pleading with the Canadian government for more polar bear population control as violent attacks against native populations have dramatically risen in recent years,” pointed out Marc Morano at the Climate Depot website, which presents evidence countering the claim that mankind is causing catastrophic global warming.

A decade ago, many scientists predicted the population of polar bears would be down by 67 percent about now.

But the report by zoologist Susan Crockford, writing for the non-partisan Global Warming Policy Foundation think tank, found that the bears are thriving.

via NO TRICK ZONE:

Ten years ago, polar bears were classified as an endangered species due to model-based assumptions that said the recession of Arctic sea ice would hamper the bears’ seal-hunting capabilities and ultimately lead to starvation and extinction.

The Inuit, who have observed these bears catch seals in open water for generations, disagree. At least this is what scientists have found upon investigation.
“There is no evidence that the fast reduction of sea-ice habitat in the area has yet led to a reduction in population size.” (Aars et al., 2017 )

Inuit observations: “…back in early 80s, and mid 90s, there were hardly any bears … there’s too many polar bears now. Bears can catch seals even—even if the—if the ice is really thin… they’re great hunters those bears … they’re really smart … they know how to survive.” (Wong et al., 2017)

Inuit observations: “No, because polar bears can go and follow the seals further [if sea ice retreats], so they won’t have trouble hunting. Also the snow covers the [seals’] breathing holes but polar bears can still hunt, it’s just for people. There is more rough ice, more thin ice. But it won’t affect polar bears’ hunting.” (Dowsley, 2007)

“Reduction in the heavy multiyear ice and increased productivity from a longer open water season may even enhance polar bear habitat in some areas. … It seems unlikely that polar bears (as a species) are at risk from anthropogenic global warming.” (York et al., 2016)

Sometimes the “Western scientific understanding” of how the natural world operates conflicts with observations.

“The view of polar bears as effective open-water hunters is not consistent with the Western scientific understanding that bears rely on the sea ice platform for catching prey. … [Participants] indicated that polar bear body condition is stable; they cited the fact that polar bears are capable of hunting seals in open water as a factor contributing to the stable body condition of the bears.” (Laforest et al., 2018).

The paleoclimate evidence, which shows that sea ice was thinner and less extensive than today for most of the last 10,000 years, also contradicts the assumptions about modern polar bear endangerment due to thinning ice. One must ask: How did polar bears survive sea ice free summers in the ancient past if they existentially rely on thick sea ice to hunt prey today?

When the observations don’t agree with the models and assumptions, real scientists are supposed to reconsider their hypotheses.

In the 3 new papers referenced below, extensive observational evidence suggests that polar bear populations are currently healthier than in the past, and their numbers have been stable or growing in recent decades.

(LINK to read the papers)

Read more at WHAT’S UP WITH THAT. Here is more info on the Polar Bear numbers — because they are associated with sea ice:

New SURVEYS have shown that

“The number of bears along the western shore of Hudson Bay, believed to be among the most threatened bear subpopulations, stands at 1,013 and could be even higher, according to the results of an aerial survey released Wednesday by the Government of Nunavut. That’s 66 per cent higher than estimates by other researchers who forecasted the numbers would fall to as low as 610 because of warming temperatures that melt ice faster and ruin bears’ ability to hunt. The Hudson Bay region, which straddles Nunavut and Manitoba, is critical because it’s considered a bellwether for how polar bears are doing elsewhere in the Arctic.

The study shows that “the bear population is not in crisis as people believed,” said Drikus Gissing, Nunavut’s director of wildlife management. “There is no doom and gloom.”

Mr. Gissing added that the government isn’t dismissing concerns about climate change, but he said Nunavut wants to base bear-management practices on current information “and not predictions about what might happen.”…

In 2004, Environment Canada researchers concluded that the numbers in the region had dropped by 22 per cent since 1984, to 935. They also estimated that by 2011, the population would decrease to about 610. That sparked worldwide concern about the future of the bears and prompted the Canadian and American governments to introduce legislation to protect them. ….

But many Inuit communities said the researchers were wrong. They said the bear population was increasing and they cited reports from hunters who kept seeing more bears. …… Mr. Gissing said he hopes the results lead to more research and a better understanding of polar bears. He said the media in southern Canada has led people to believe polar bears are endangered. “They are not.” He added that there are about 25,000 polar bears across Canada’s Arctic. “That’s likely the highest [population level] there has ever been.”

GATEWAY PUNDIT chimes in on the polar Bear “deaths” versus the facts — a while back (2011):

Then the truth started leaking out. After democrats passed their junk science “pile of sh*t” Cap and Trade legislation in June 2009 a report was released, and suppressed, that showed that polar bear numbers, far from decreasing, were much higher than they were 30 years ago. In fact, it’s about time for a cull. 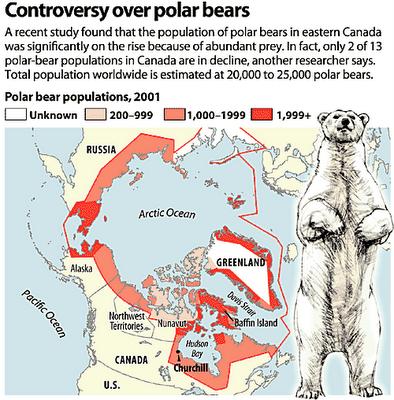 Polar bear numbers in Canada have increased in 11 of 13 regions in recent years. Polar bear encounters on the North Slope oil fields have risen to record levels the last two years. There are 5 times as many polar bears today as there were 50 years ago:

Despite the fact that the bear populations are booming, the Obama administration set aside 187,000 square miles in Alaska as a “critical habitat” for polar bears recently. The action that could restrict future drilling for oil and gas development.

Now, to top it all off, we find out the scientists who first reported on drowned polar bears is under investigation and likely fabricated the story.