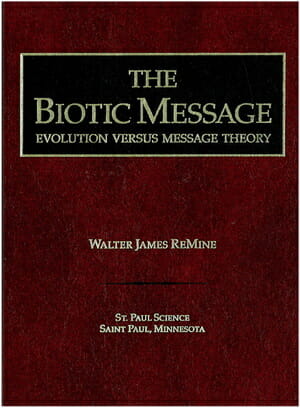 [p. 277>] The origins debate is beclouded with many illusions that use words and imagery to distort our perception in favor of evolution. Those illusions must be identified and removed, so we can see clearly. The present chapter focuses on the illusion that large-scale phylogeny actually exists. Three devices have been used to create this illusion of ancestry [the excerpt focuses on the third bullet point]:

[p. 297>] In recent years, evolutionists have redefined lineage and phylogeny to mean cladogram (or sometimes phenogram). The motive is twofold.

Evolutionists meet both these goals by redefining lineage and phylogeny in terms of cladograms. This shift in meaning is a major change in strategy.

If phylogenies of one sort are to pass away, is the notion of phylogeny doomed also? We judge not, for there is an alternative notion, here simply termed classification. Notions of this kind can be looked upon as phylogenies — as historical statements of ancestry and descent. But they are differ­ent in character. They include no ancestral taxa. They deny the postulates of darwinian systematics: that ancestral taxa have an objective identity independent of their descendants; that ancestral taxa can be discovered and identified as such; that ancestral taxa are under the constraints of empirical investigation. This shift in meaning of the term phylogeny from a Darwinian to a cladistic sense marks a revolution in biological systematics. (Nelson and Platnick, 1984, p 153-154)

The shift in meaning is virtually undetectable by the public. Here is an example.

It is possible, then, to deduce phylogeny, that is, genealogical history, by a careful, logical analysis of which organisms share which characteristics. A genealogy derived in this way may be considered a hypothesis, always subject to possible revision. If the hypothesis makes predictions that are borne out, we gain more confidence that it is correct. (Futuyma, 1983, p 55)

Futuyma explains how we can identify phylogeny and genealogy in a testable scientific manner. His discussion is misleading, since he is referring to cladistic analysis, where no ancestors are ever identified.

Other evolutionists subtly build the new meanings into their definitions. For example, Berra defines lineage like this:

Lineage — The line of descent from a particular ancestor; a major group of plants or animals across a span of time, all members of which derive from a common ancestor. (Berra, 1990, p 171, my italics)

His definition would allow evolutionists to use a cladogram or phenogram as a “lineage.”

[Evolutionary change is also simply a fact owing to the changes in the content of gene pools from generation to generation. It is as much a fact as the observation that the earth revolves around the sun rather than the reverse. (Mayr, 1991, p 162-163)

In a similar way, Fox argues that the difference between human offspring and their parents proves evolution:

The fact of evolution … can no more be denied than one can deny his own senses. Each of us need only examine human offspring and their parents to attain this inference. (Fox, 1984, p 209)

In a similar way, Saladin misused the word evolution for rhetorical force during an oral debate:

Now, maybe the funniest thing about tonight’s debate is … that the evidence for evolution is so convincing even Dr. Gish [a creationist] accepts almost all evolution! He’s a closet evolutionist! (Saladin, 1984, p 17)

The main thesis of evolution is that species are not fixed and immutable. (Kitcher, 1982, p 7)

The disparity between public interpretation and the evolutionists’ technical definition is ideal for creating illusion.21 As long as people are fooled by that illusion, we must protest its source. We cannot allow the origins debate to be decided based on confusing language.

Evolution refers to large-scale biological change, effectively from atoms to accountants. Anything failing to make that ultimate claim is not evolution (and is open to acceptance by creationists). Evolution is either all the way — or it is creation. This is already its de facto meaning within the origins debate, at least among the thoughtful public.

[p. 299>] Evolutionists needed the terminology for an internal debate they are having. The Darwinians argue that large-scale evolution is just the long-term accrual of small-scale biological change.22 Their opponents, the punctuationists, refute that notion. They point out that the small-scale changes visible in the living and fossil world cannot account for the overall evolution of life. The punctuationists are making a potent anti-evolutionary argument. Evolutionists needed to debate each other, but they wanted to reassure the world that they are not questioning the “fact” of evolution. The words macro- and micro-evolution served that purpose.23 When the debate is conveyed in that language, its real significance is imperceptible to the public. Evolutionists said they were merely debating the detailed relationship between macro- and microevolution, not doubting the fact of evolution.

Yet in the origins debate we are doubting evolution, it is the very issue under discussion. The evolutionists’ terminology serves to obscure evolutionary diffi­culties and create illusion in the public mind.

Evolutionists often use the term microevolution as a weapon in the origins debate. According to their argument, if you believe in microevolution, then you are an evolutionist.24 Such arguments fool the ear, but have no logical basis.

Some creationists tried to clarify the debate by saying, “Microevolution is not real evolution.” Though the argument is legitimate, it sounds nonsensical on its face. Again, the sound of the words placed creationists in an awkward position.

In summary, evolutionists often misuse the word evolution and create illusion by equivocating this simple word. The origins debate must clarify the matter. Evolution refers to large-scale transformation, from molecules to man.

[p. 300>] There are strategic motives for evolutionists to redefine terminology in peculiar ways. By redefining the key terms, evolutionists effectively silence opponents. Opponents are placed in an awkward position where they cannot communicate effectively.

Let me describe how this happened to me. I claimed that, “Large-scale phylogeny is systematically missing from the record of life.” That is a serious statement about the empirical world. It deserves to be said. An evolutionist responded, “That is not true, we have identified many large-scale phylogenies” and he offered a cladogram as an example. Our debate soon degenerated into an argu­ment over the definition of phylogeny. An important point about the empirical world was sidetracked into a seemingly dry debate about the definition of words. After further discussion the evolutionist dug in his heels. “I do not accept your definition of phylogeny,” he declared. That move would leave me without the key term necessary to communicate my claim about nature.

The evolutionists’ redefinition of the term phylogeny is a strategic move that turns their opponent into a mute: unable to communicate serious objections to evolution. This applies to all the terminology of the origins debate. By redefining the key words, evolutionists effectively silence or sidetrack opponents.25 The opponent can no longer communicate effectively, because all the key words have been taken away.

[p. 301>] ….Illusion is created by misusing the key words of the origins debate: ancestral, primitive, advanced, derived, intermediate, transitional, lineage, and phylogeny. Evolutionists have redefined all these terms so that no ancestors ever need be identified. These words are used to convey the sound and imagery of direct ancestry, without supplying the evidence.

The evolutionists’ peculiar definitions of terminology also served a strategic purpose. The definitions made it awkward for an anti-evolutionist to communicate. By taking away all the key words, evolutionists effectively silenced opponents.

The evolutionary definitions are illegitimate because: (1) They function to create illusion. (2) They protect the illusion by inhibiting an opponent’s ability to communicate. (3) Other terminology exists that conveys, without illusion, the evolutionists’ intended meaning.

21 Here is an example of the illusion. Saladin writes, “Gish [a creationist] distorts the meaning of evolution as a ploy to make it more assailable (the straw man tactic)….. Correctly stated, evolution simply says this: Populations of organisms exhibit genetic change over a period of time, and this enables them to adapt to changes in their environment. If Gish had defined evolution correctly, he would have found it difficult or impossible to refute in this debate. It is clear from [Gish’s book] Evolution? The Fossils Say No! that even he accepts evolution on these terms.” (Saladin, 1988, p 36)

22 “Most of modern evolutionary theory (as judged, for example, from the issues of the bimonthly journal Evolution) lies squarely within the realm of microevolution….. Little work is geared to bridging the conceptual gap between microevolution and macroevo-lution, the latter taken simply as large-scale, long-term accrual of adaptive change.” (Eldredge, 1989, p 58, 59)

23 “We understand very little about evolution, particularly the type of evolution involved in the creation of the major taxa, the kingdoms, the phyla and so on. We call this `macroevolution’, to distinguish it from a seemingly different process, ‘micro-evolution’, which is characteristic of evolution in the lower taxa. However, the term ‘macroevolution’ serves more to hide our ignorance than symbolize our understanding.” (Woese, 1987, p 177, my italics)

25 When creationists use the terminology in legitimate commonsense ways, then evolu­tionists have typically argued that the creationist misunderstands or misrepresents science

One thought on “Evolutionary Illusions: Obfuscating Terms To Transform Perceptions”