This comes by way of Moonbattery:

In this lunatic political environment, conservatives who refuse to support the authoritarian progressive Donald Trump for reasons of principle are often accused of supporting his fellow authoritarian progressive Hillary Clinton and even — bizarrely — of being liberals. If this accusation has merit, then orthodox Jew Ben Shapiro must be a neo-Nazi:

Conservative commentator Ben Shapiro held a lecture at California State University, Los Angeles, in February. One week ago, university President William Covino hosted a “healing space” meeting to brainstorm ways CSULA can block speakers like Shapiro from visiting the school in the future.

As readers might recall, Shapiro’s views so threaten CSULA leftists that they resorted to pulling fire alarms in an attempt to prevent anyone from hearing him speak.

When asked by a student how he plans to block events like Shapiro’s from happening again, Covino didn’t offer a clear answer, only telling the student he believes — “very tragically and unfortunately” — the issue of hosting a conservative talker will arise again.

During the same session, professor Melinda Abdullah, chair of the college’s Pan-African Studies department, told Covino that she found Shapiro to be an advocate of “anti-blackness,” even calling him a “neo-Nazi,” which she said is “ironic” because she knows he’s Jewish.

I found this frail example of a woman (Professor Melina Abdullah) tearing up about racism a bit incredulous… and… frankly, ironic. Mmm, sorry, moronic. She actually associates with a REAL racist cult leader — Louise Farrakhan.

But, before getting into her connection with Louise Farrkhan, however, let us intimate why this even matters… why bring up Louise Farrakhan at all?

In a hypothetical using “Dubya” [George W. Bush] next to the reality of Farrakhan ~ I educated an “old school Democrat” with my memorized “bio” of Farrakhan in a conversation I had on vacation: 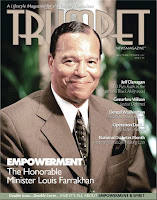 Obama’s pastor not only was a minister in The Nation of Islam, an anti-Semitic/racist group, but the church’s book store sells sermons by Louise Farrakhan, who teaches that the white man was created on the Island of Cyprus by a mad scientist, Yakub. (Mr. Farrakhan also believes he was taken up on a UFO to meet God, and was told he was a little messiah, take note also that he was directly involved in the deaths of police officers as well.) Louise Farrakhan was featured twice on the church’s magazine which reach 20,000[plus] homes in the Chicago area. Even placing on the cover with Louise Farrakhan a third time the founder of the Nation of Islam, Elijah Muhammad. Elijah Muhammad likewise taught that the white man was created by Yakub 6,600 years ago. Walter, Louise Farrakhan teaches that the Jews in Israel do not belong there, and that the true Jews are the black people. Louise Farrakhan was invited into Obama’s church, to the pulpit and given a “lifetime achievement award.” In fact, the New Black Panthers and members of the Nation of Islam often times sat in the pews for sermons by Rev. Wright, whom Obama called a mentor. Not to mention Obama’s wife pictured with racist, anti-Semetic, UFO cult members…..

…Farrakhan is not merely a “black Archie Bunker”…

…he is much-much worse…

…we aren’t done yet…

Farrakhan recently spoke about how black gods will return to earth and destroy white people in his now infamous (more than famous) UFO speech — actually one of many bat-shit-crazy, RACIST, black supremacist speeches he has given over the years:

The above is a case-study in “Doctrines of Demons” in case you were wondering. And if THAT were not enough… he is intimately connected to murder. I mean when even the Southern Poverty Law Center notes them as a racist cult, then it must be true? Right lefties?

…that we have Farrakhan squared away…

What does an anti-racist professor who cannot be around “racists” at all doing around one of the worst offenders of racist nationalism known in recent cult history? [We are assuming for argument sake that Ben Shapiro is racist, BTW, which he is not.] 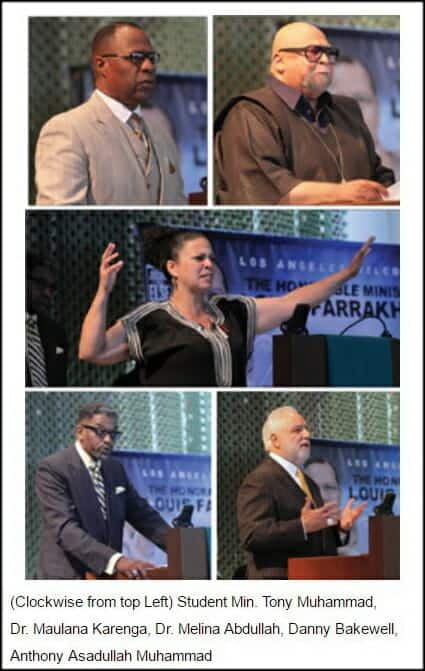 Here ~for instance~ is Dr. Melina Abdullah hangin’ with the KNOWN and CONFIRMED racist at the “West Coast Standing with Farrakhan!” — as pictured and written about in the Nation of Islam’s racist/cult apocalyptic magazine, The Final Call:

LOS ANGELES – The Honorable Minister Louis Farrakhan met with L.A.’s community leaders during his “Justice…or Else!” national tour to promote the 20th Anniversary of the Million Man March, slated for October 10 in Washington, D.C.

A diverse coalition of clergy, grassroots activists, street organization leaders, educators, gang interventionists, homeless activists and entertainers were among the more than 1,500 present.

“This is not a Million Man March. That’s what was!  This is a movement of human beings for justice or else,” Minister Farrakhan declared….

Some of the others on stage were none other than the murderous, racist, torturer of women Maulana Karenga, which you can read more about HERE.

And she thinks she is able to speak to the offense of racism????

Maybe she is tearing up because her conscience is eating her alive?